While an early set piece changed the tenor of the night for the Union against D.C. United on Saturday, the hosts’ aggressiveness was rewarded as they ran through a lethargic effort from the visitors to the tune of four goals.

A back three always provides some tactical intrigue, but Ben Olsen’s formational quirk has been forced out of necessity since his matchup against FC Cincinnati, as described by Jason Anderson at Black and Red United. The new 3-5-2 shape is designed to put Julian Gressel in a more productive role while simultaneously protecting the squad’s lack of options at right back.

Unfortunately for United, Philadelphia has the flexibility and capability to find a weakness in just about any MLS side and hammer at that crease until it bears fruit in the Union’s favor. The team masterfully played their way around a narrow, high-pressing Red Bull on Tuesday, and on Saturday, Jim Curtin’s side targeted the space between Gressel and the slow-footed Axel Sjöberg.

In a 3-5-2, Gressel should be a right midfielder/wingback hybrid who can do some damage going forward, especially with his crosses. Despite his consolation goal, he was a negative in both phases. He offered little to no protection for Sjöberg, and offensively, his contribution wasn’t high enough up the field to fill the role of an attacking wide player: 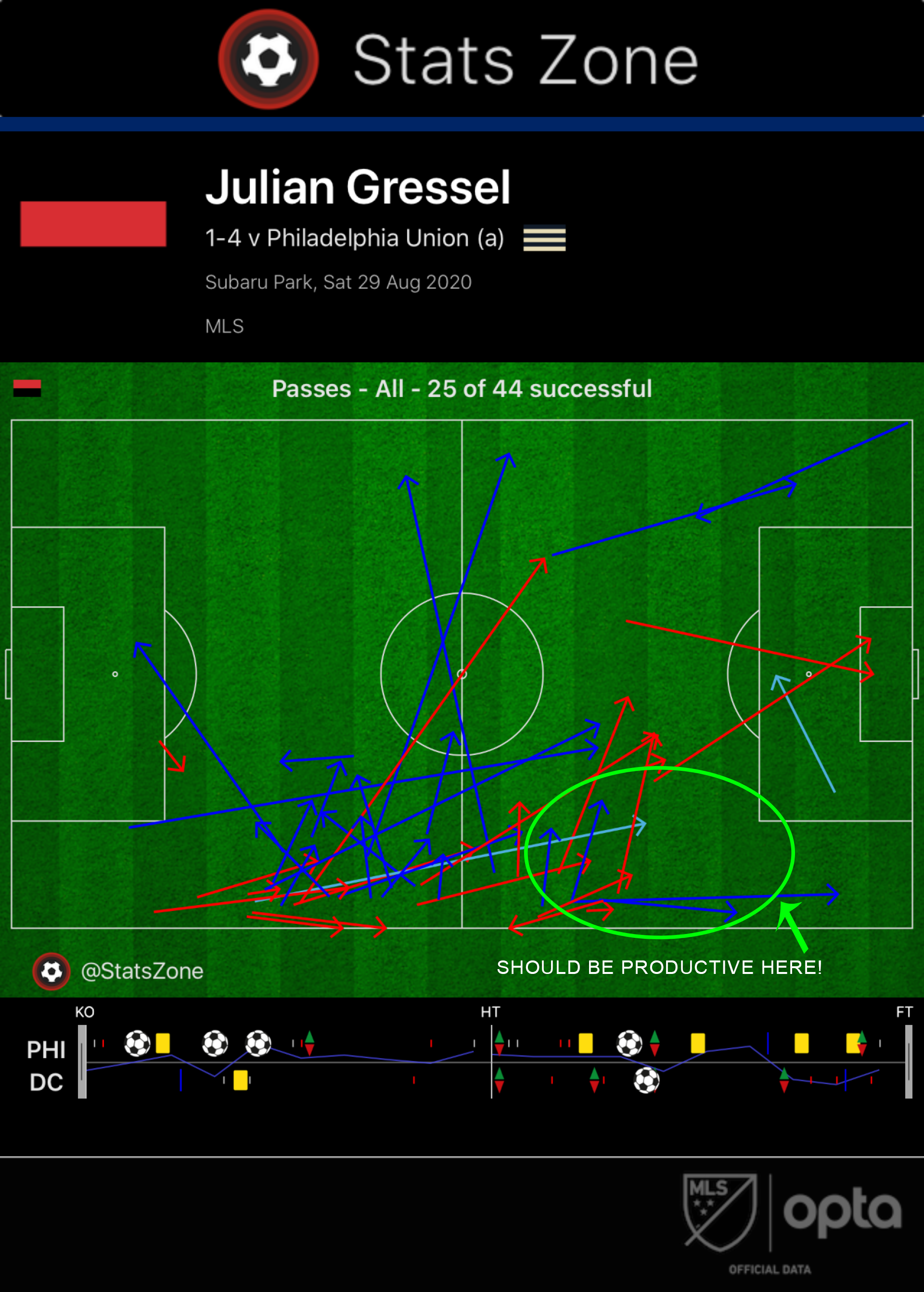 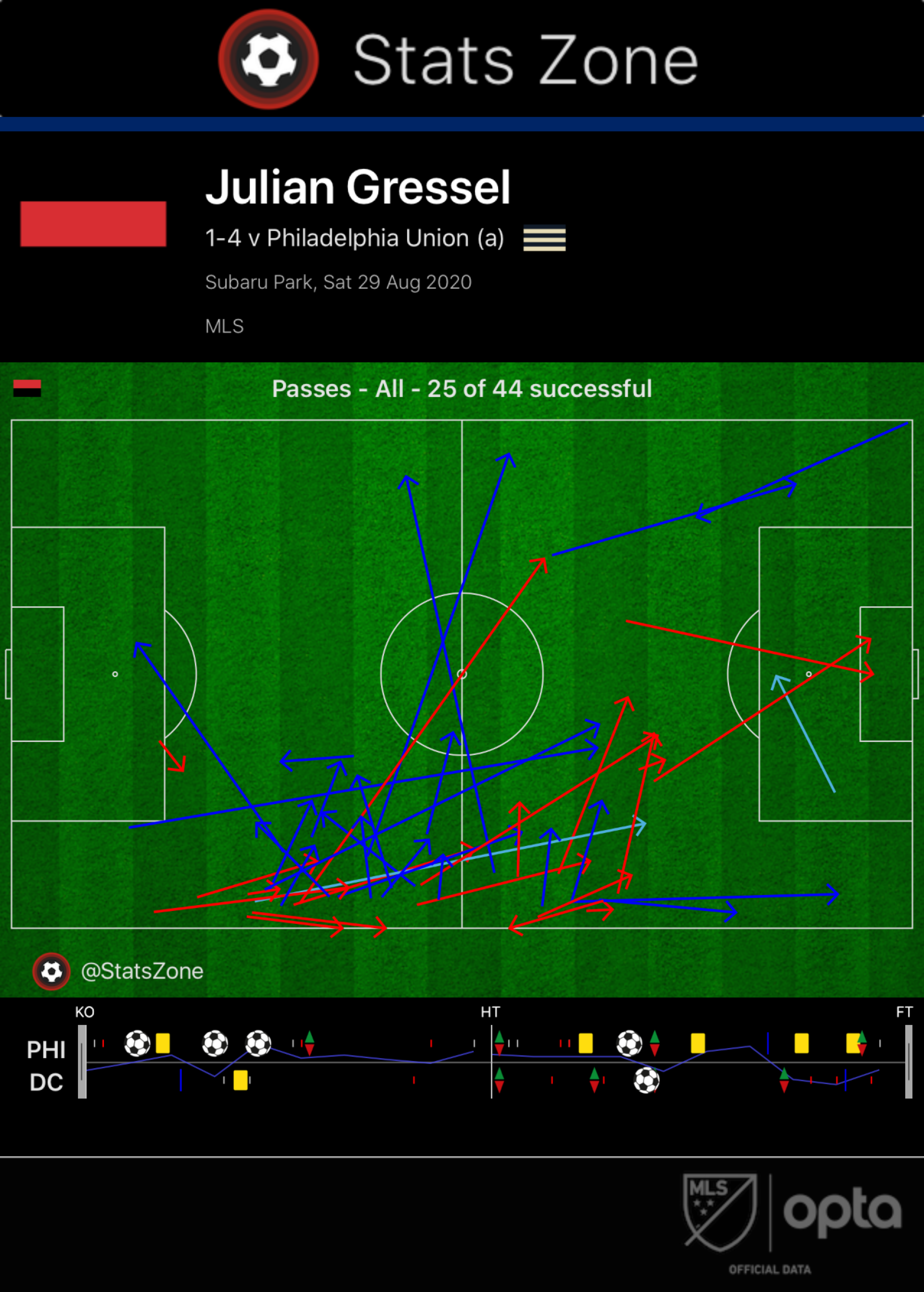 The Union wanted all three members of the United back line to defend in space, and they especially wanted to exploit Sjöberg’s lack of pace. While the midfield pulled the strings all night, the visitors’ shape wasn’t going to allow them to play centrally to get to those matchups. Instead, it took a driving run from left back Kai Wagner to warp United out of shape on the second goal:

How good was this finish? pic.twitter.com/tfzejHDxne

Sjöberg wanted nothing to do with an incoming Wagner and handed him off. While the fire could have been put out after a misplaced cross, he lost his mark, sat in no man’s land, flubbed a clearance and was slow to close out a striker. The onus of the work still fell on Kacper Przybylko to finish, but he punished a defense that gave him just enough room from distance.

You could forgive D.C. United for being a step slow on a shorthanded road trip to a talented Union team. It doesn’t make it any less impressive how ruthless the Union were on their next two goals as they hunted Sjöberg with two through balls as direct as they come.

“It’s no secret with our group we like to play forward as fast as possible,” Curtin said. “Scoring the early goals, especially off a restart, makes D.C. have to open up. That created more space and let us play balls through the lines, be relentless and go for the killer instinct.”

A beeeeautiful ball from Brujo, & Santos takes it the rest of the way! Boys are off to a fast start tonight at Subaru Park #DOOP | #PHIvDC 3 - 0 pic.twitter.com/JcRgcThxmd

Sjöberg’s positioning is way too high and narrow compared to the rest of his back three. While Sergio Santos’ run is coming from a wide position where there normally would be an outside back, there’s just empty grass between Gressel and Sjöberg. José Martinez, who has been dynamite in the No. 6 role this year, made them both pay with a ruthless through ball. El Brujo, indeed.

After their first half flurry, the Union coasted their way through the rest of the night, content to play comfortably through United’s paper-mache press. It wasn’t until the 60th minute that the Union found another line-breaking pass to cap off the rout.

“You can see guys tonight finding some really good pockets, and turning and playing the next ball forward,” Curtin said. “There’s always movement ahead of the ball and that’s when we’re at our best.”

FOUR! It's Aaronson's turn to get on the scoresheet. #PHIvDC pic.twitter.com/av7pnbksTQ

Olivier Mbaizo, who started at right back on a night of rest for Ray Gaddis, had a great night going forward. His instinct and understanding of the game plan was on full display here with a one-time laser over the heads of the United backline.

Przybylko showed the advanced movement Curtin alluded to as he waited off of the shoulder of Sjöberg, ready to be dangerous even when the ball was in front of his own box 40 yards away. As soon as Mbaizo let it fly, Kacper turned Sjöberg inside out and was off to the races to hand Brenden Aaronson a goal on a silver platter.

When asked how confidence is playing into the Union’s attacking freedom, Curtin opted to praise his team outright and not their mental state.

“We’re confident, and it needs to be said we’re good,” Curtin said. “We have a good team.”

Given their performances this summer, it’s deserved.

Another ‘good team’ awaits on Wednesday in the Columbus Crew, who sit two points ahead of the Union in second place in the Eastern Conference. Philadelphia will have less weaknesses to pick on, more talent to account for, and a highly motivated team that knows what it wants to do under Caleb Porter.

It’s a great test for a squad functioning at an elite level in the MLS due to its defensive effort and tactical discipline.