Share All sharing options for: ‘Right side dominant’ Union stretch out Red Bulls’ back line in 1-0 win

The Philadelphia Union used the width of Ray Gaddis and Alejandro Bedoya to stretch out a narrow Red Bulls side beyond their breaking point for a 1-0 win Tuesday night at Subaru Park.

“We’re naturally a right-side dominant team with Ale and Ray, and then Ilsinho, as well as Brenden [Aaronson] likes to make runs out there,” head coach Jim Curtin said. “Overall, it was a really good performance and we have something that is really strong on that side.”

Curtin instructed the Union to attack out wide, and it was necessary against a narrow New York team that eagerly presses high up the field like all of the teams under the Red Bull umbrella. To get the ball there, Curtin needed his center backs to bypass New York’s press with long diagonals to the touchline and Mark McKenzie and Jakob Glesnes did so effectively.

“We knew that they [Red Bulls] liked to trigger their press with central passes and short balls into the midfield,” McKenzie said. “We can try to break lines by skipping passes out wide and trying to reduce the number of passes from one side to the other … I thought we did well with that, especially in the first half.”

It was an excellent night of distribution from the center backs, who found the wide man time and time again while largely avoiding any cheap giveaways to fuel the Red Bulls’ attack. After their second straight shutout, Curtin wasn’t shy about claiming he had the “best center back group in the league.”

From there, the Union attack got going due to the chemistry of Bedoya and Gaddis. Bedoya’s positioning was key as he hugged the right touchline to stretch the Red Bulls and create pockets of space that the Union generated key chances from, including the night’s lone goal. 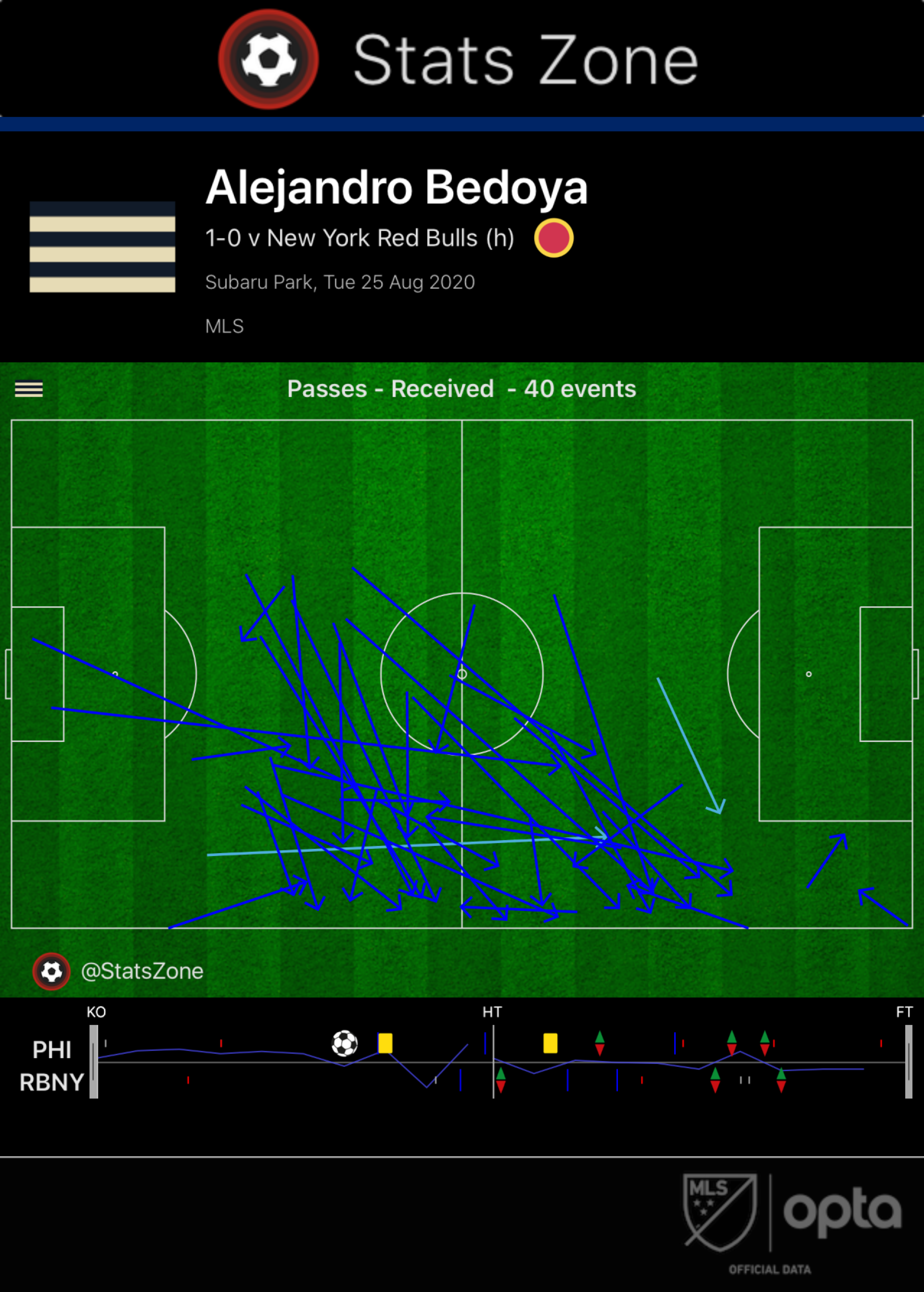 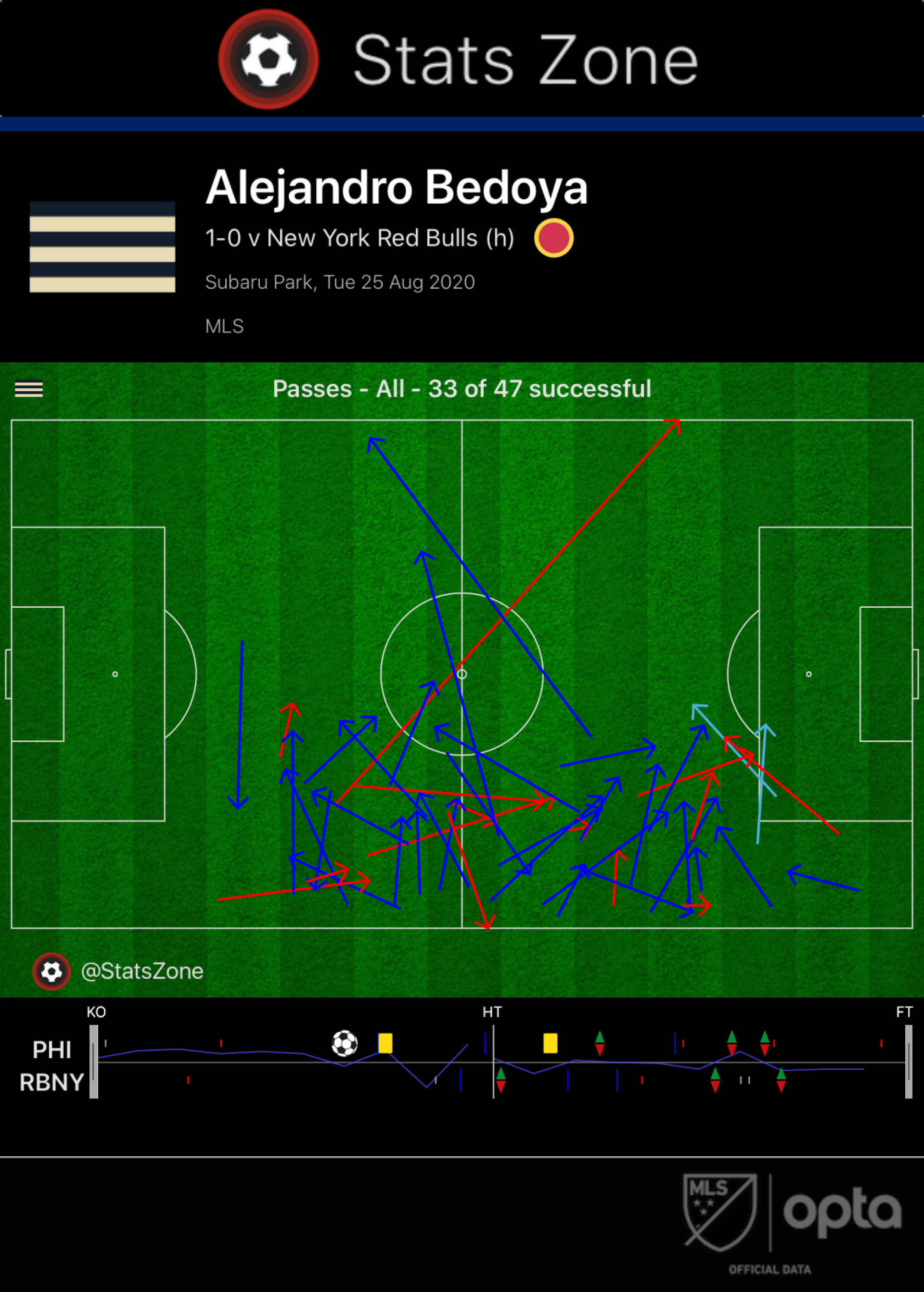 “They have a good thing going where they feed off each other,” head coach Jim Curtin said of Bedoya and Gaddis’ partnership. “There’s moments where Ale comes inside and it allows Ray space to overlap him. There’s other times where Ale can come back low and Ray will run past him … We’ve even taken it to the next level where you’ll see Ale all the way out wide and Ray pops up inside.”

That final “next level” combination is what undid the Red Bulls and set up Gaddis to deliver a pinpoint cross to Kacper Przybylko:

Bedoya’s width when he received the first wide ball dragged New York left back Pendant up the field and out of shape. Gaddis immediately made an inverted run inside of him as Bedoya cycled the ball centrally. Pendant tracked back but he was drawn outside once again, this time by Andrew Wooten. The striker’s clever positioning opened up a huge area of space for Gaddis to run into from a central position, where he delivered a perfect final ball.

It was the epitome of Curtin’s game plan, with Gaddis and Bedoya’s spatial awareness punishing a Red Bulls side that didn’t get enough ball pressure.

Gaddis is playing like one of the best right backs in the league in his ninth season with the Union and making contributions up and down the right side of the field. While he usually shuts down an opponent’s entire left side, he was rewarded with an assist for his two-way effort.

“Ray does a lot of work and he is an unsung hero,” McKenzie said. “He deserves a lot more credit than he gets ... He does a lot of the dirty work as well and that’s the same for everybody in the back.”

New York played with more desperation in the second half, and turned the game into an open affair. The Union had some trouble playing through the press, but still created a handful of golden chances for Pryzbylko and sub Sergio Santos.

Some better finishing would have given the Union breathing room in the final 10-15 minutes, but they ultimately created more than the visitors and enough to grab a goal. Curtin joked in the postgame press conference about how he loves a 1-0, but it’s the type of performance that suits his hardworking side.

That the Union didn’t blink against the press and outthought their way around Chris Armas’ deployment speaks to the level the team have reached in 2020. If the Union can earn another three points at home against a struggling D.C. United side on Saturday, it sets up a tasty encounter against Columbus, the table-toppers in the Eastern Conference, on the road next Wednesday.