According to the player, the Union finally have a true left back.

Australian based Fabio Alves tweeted and posted on Facebook late last night that he will join the Philadelphia Union.

UPDATE: Alves has deleted his posts on social media sites, but here they are side-to-side with how his profiles look at the moment: 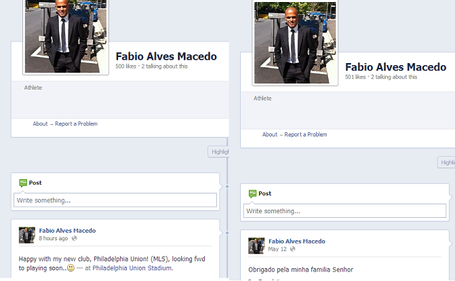 The left back had agreed with his former club, Sydney FC, to mutually terminate his contract at the end of the latest A-League season, in order to leave as a free transfer. Alves wished to find another job when Sydney told him that it was unable to guarantee a starting role for him.

Fabio, who signed a two-year contract with Sydney in 2012, was told by the club that it could not guarantee him a first-team spot next season and the player has agreed to have his contract terminated.

"Fabio wishes to thank Sydney FC for giving him the opportunity but since he would like to play regularly he took up the option of leaving the club a year before his contract expires," the player's agent Milton Da Rocha said.

"Fabio loves Australia and he has started the process of acquiring citizenship.

"He has asked me to find him another club."

Alves originally joined Sydney FC's rivals Melbourne Victory in 2011-2012 when he impressed on trial. The Brazilian went on to play 23 times for Melbourne, scoring once and assisting on another goal.

Reports out of Australia state that Alves left the Victory when the club pulled an agreed upon contract extension. He then went to their rivals after again impressing on trial.

He went on to play 18 times for Sydney, with his only statistical record of note having been twice sent off for two yellows in a game during 2012-2013. With Alves in the lineup, Sydney went 6-11-1 in A-League play.

The 28-year-old will join Raymon Gaddis on the left side of the defense and will be only the third true outside back on the Union's current first team roster (Sheanon Williams).