The Fabinho or Gaddis conundrum

Defenders are not usually talked about, except for when they make mistakes and goals are conceded. I delve back into the discussion about Union's left backs, and get to the bottom of whose name should be listed in the starting XI.

Share All sharing options for: The Fabinho or Gaddis conundrum

The day was Sunday, March 6th 2016. The location was Frisco, Texas. The scoreline was FC Dallas 2, Philadelphia Union 0. The focal point of the Dallas attack was their right wing attacking the Union's defensive left . I received a couple of questions on Twitter while live-tweeting the match as to why Fabinho was starting over Ray Gaddis. It has been and always will be the case that in times of inability to keep a clean sheet, the lineup selection will inevitably come in to question.

Fast forward to April 16th, for example. Not the best day, as Union lost at Seattle by a 2-1 scoreline. It's the 1, however, that's important here - the lone goal for Union started from the foot of the left fullback. Fabinho was played out wide by a pass from central midfielder Warren Creavalle. He assessed the run of CJ Sapong, and deftly floated a cross into the 18-yard box. The pass took Sapong, along with two defenders, towards the area wide right of the goal, and allowed CJ to be able to win the header, cushioning it down for Sebastien Le Toux to strike first-time into the net.

The downside of that ability is that Fabinho is asked by the team to get forward and augment his team's forward forays. It takes him away from defending, which is his primary responsibility - something his counterpart Gaddis does not neglect. I used the stats on Whoscored.com to research the passing and defending data between the two. Fabinho is dribbled past 1.3 times per match, where Ray is at zero. Ray also has yet to commit a foul, albeit this is only in one-and-a-half games this season. Fabinho has on average almost double the clearances, tackles, and interceptions than Gaddis. But, those statistics prove that opponents make more attempts to exploit Fabinho; they are not as much to his credit. Ray also keeps himself out of the referee's disciplinary summary. 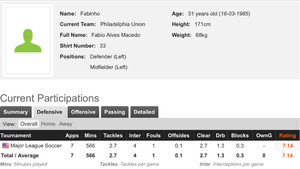 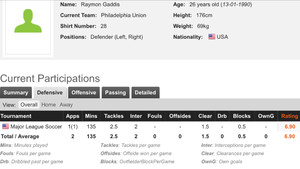 I don't know what to make of the overall rating that this site uses, but the defensive stats make for an interesting decision for a manager. The decision is bigger than just the choice of one player or the other: it is a choice in team tactics. Fabinho allows for fluidity in the attack up the left flank and the ability to pass to set up goals. Gaddis provides cover against the opponent running out on the counter-attack. Fabinho's romps into the attacking third mean that he gets stretched while retreating, and he is prone to making rash challenges. His five yellow cards already accumulated in just seven games are a testament to that. It also causes the left midfielder playing in front of him (usually Chris Pontius) to be mindful to cover for the defender, as well as changing the positioning of the left holding midfielder and the left central defender. A lineup with Ray Gaddis is more consistent in its shape and line discipline, as Ray does not get himself caught upfield. His overlapping runs usually result in him passing short to an attacking player, and then getting himself back in position to defend. The statistics I've sourced from whoscored.com suggest that the opponent decides to probe Union elsewhere when Ray is on the patrol.

A common cliche in sports is "Defense wins championships." In this case, though, the choice of the more capable defender limits his team going forward, making them much more predictable. Yes, Fabinho gets caught out of position, and he is a risk of a double-yellow red-card sending-off. Union have shown by starting rookie Keegan Rosenberry at right back all season that they value their outside defenders augmenting the offense. Fabinho being on the pitch allows Union to tactically attack with symmetry. Gaddis leaves their left wing play wanting. In the end, I hope Jim Curtin goes with Fabinho.

Who would you like to see at left back? Take the poll and let us know in the comments section below!