The fan poll results for game #1 are in!

Given the stellar eight save performance by Andre Blake and the obvious gaffes by left back Fabinho, the first week's results don't come with many surprises. Andre Blake was the runaway winner getting an average of 8.2 out of ten points from the fans, nearly three points more than second place Ilsinho with 5.5. Here's are the final results:

The bottom three according to the fans were Fabinho, rookie Ken Tribbett and Leo Fernandes. Here is what the distribution of responses looked like for Fabinho and Blake: 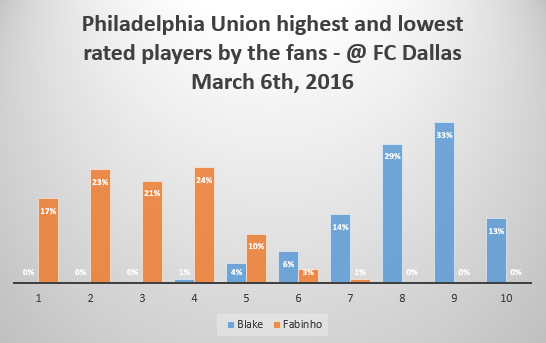 There were a few apologists who ranked Fabinho as high as seven. Thirteen percent of the voters thought Andre Blake had a perfect game and awarded him a ten.

There are other sites that rate Union players after each game. This week Adam Cann from Philly Soccer Page rated the Union players, and whoscored.com has a statistically based performance score that typically ranges between six and eight points. While the fans and PSP take a more subjective approach to assessing performance, the whoscored method is completely computer driven which puts an interesting lens on the results.

PSP had roughly the same ranking as the fans with the exception of anointing Sapong with the second best performance. When looking at the "man vs. machine" results, however, the whoscored rating was sour on Sapong, ranking him ninth out of the starting eleven and giving him a very low score of 5.88. Digging into his stats might give a clue as to why. Sapong gained just 27 touches on the day, the fewest of any starter. He turned three of those touches over and completed just 61% of his passes. He also only won one aerial duel and attempted just one shot, which missed the goal. Fans might have been intrigued by his second half where he held the ball up well and helped improve the attack, but a purely statistical view lacks anything to get excited about.

On the other side, the fans appreciated Brian Carroll more than PSP or whoscored. The fans gave him the 8th best performance while PSP and whoscored placed him barely better than Fabinho.

Andre Blake was the unanimous winner this week and Fabinho the unanimously loser. I doubt future games will offer such an obvious hero and an obvious goat. Let's hope there will be few games with any goat at all.