HOT TOPIC QUESTION OF THE WEEK: Who does Maidana replace?

A long week off welcomes back the Philadelphia Union's Number "10" back into the fold. But with the Union playing some of their best soccer without him, who does Cristian Maidana replace?

Share All sharing options for: HOT TOPIC QUESTION OF THE WEEK: Who does Maidana replace?

Cristian Maidana has had a polarizing season. His start was mired in being forgettable instead of being as exciting as a new attacking midfield Designated Player is expected to be. After a quick turnaround and being tops in the league in assists, Maidana got hurt. Once we started to love Chaco, he was ripped out of our sights. The heralds than sang of his return during one of the best stretches of play in Philadelphia Union history. Who will he replace once he returns to the field in blue and gold?

The Brotherly Game weighs in.

Matt Reppert - Probably Andrew Wenger, despite his good run of form, you can't leave off Maidana and Wenger will be our "super sub"

John Rossi - Ethan White. Maurice Edu will slide back into defense, Vincent Nogueira will be paired with Amobi Okugo, and Maidana will be slotted in at central attacking midfielder.

Eugene Rupinski - Personally I'd like to see the Danny Cruz/Andrew Wenger tandem go to the bench and the Union run a 4-2-2-2 with White and  Carlos Valdés at center back, Edu and Okugo at defensive mid, Maidana and Nogueira as the central/attacking mids, and Conor Casey and Sebastien Le Toux up top. This would have to rely on Sheanon Williams and Raymon Gaddis providing speed and width from a more wing back position than a typical full back position, but I think they could pull that off.

That being said, I have a feeling it'll be White going to the bench with Edu moving back to center back and the team retaining the 4-4-2 formation they've been playing. It's not a bad problem to have. I think it's more of a question of what Jim Curtin and staff think the best tactic will be.

Frank Cobbina - If we're sticking with a 4-2-3-1 formation, then White is the one that has to sit. I'd prefer to keep Nogueira in his desired "8" slot, paired with Okugo in the central midfield.

Barry Evans - What I'd like to see and what i think will happen is two different things. I'd like to see Wenger/Cruz out because they are the weak link of the team just now. I think Okugo is the one drops out because Curtin likes White, and Cruz/Wenger will be a different role from Maidana. Edu and Noguiera will be "DMs" and Maidana, Cruz/Wenger and Le Toux the attacking midfielders/forwards with Casey.

Matt Ralph - As long as Wenger isn't feeling sick I like him better as a sub. If he's feeling sick again like he did last Sunday night I'd start him again.

Jared Young - If it were me and thinking about just this year I'd sit Ethan White, put Maidana at central attacking midfielder, start Wenger on the left and move Nogueira back to the "8" slot. Either Okugo or Edu would fit nicely next to Valdés and this would be the Union's best shot at the postseason. But Curtin seems to like White at center back and may be grooming him longer term to pair with Valdes. So I bet Wenger sits and Maidana takes over left wing and Nogueira stays as the central attacking midfielder.

The issue with Maidana is truly a wonderful issue to have. We're really discussing what the best way is to bring our best player back, and we're struggling to do so. There is no real best answer for this predicament, as the team is playing really well during the last few games.

The answer comes down to who they play. The opponent is Toronto FC and if he returns to the pitch at home it should be with an attacking mindset against a weak and wobbly team. If Maidana returns to the field against Toronto on the road, than perhaps Jim Curtin will take a more defensive approach especially without the aid of Valdés and M'Bohli.

I'll give my two answers based on whether Maidana starts at home or away against Toronto for his first game back: 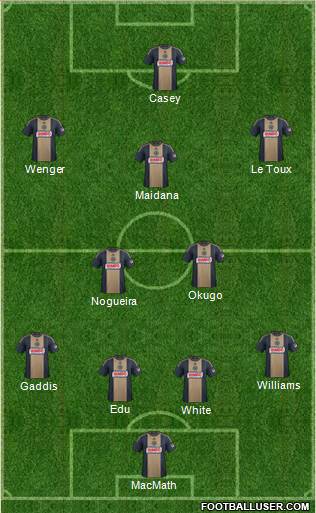 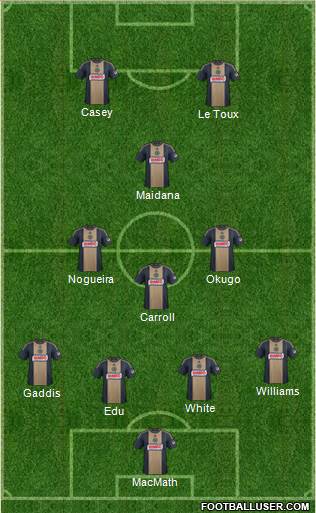 The two lineups are obviously different based on the fact that MLS coaches tend to go all out at home and go reserved at home. Curtin isn't particularly different and in my opinion I think these are the best two options. With several players out for Toronto I believe the Union can pick up two wins with these two lineups. Although playing two games in four days is going to be rough for both teams involved, I don't think four points in out of the realm of possibilities, given more of a low energy performance in the second leg of this week.

Just in case you were wondering what my favorite starting XI looks like with a full squad (I'm looking at you, New York Red Bulls), here it is: 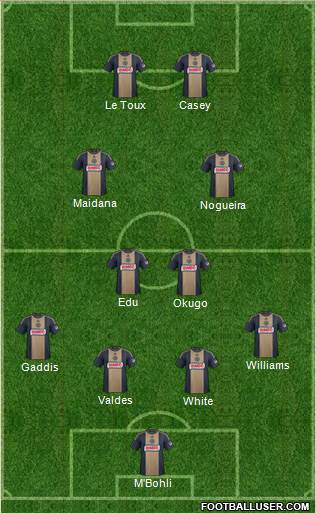 So let's see what Curtin decides to do when the full squad is available for selection, because I think that looks rather tasty. In the meantime, welcome back Chaco. Go show Toronto why you were one of the best playmakers in MLS before your injury.

So who do you think sits? Take the poll below and let us know in the comments section!