HOT TOPIC QUESTION OF THE WEEK: MLS Next and New Logo?

In typical overblown MLS fashion, the league decided to have a ridiculous press conference to announce their new logo and MLS Next. What should we make of it?

Share All sharing options for: HOT TOPIC QUESTION OF THE WEEK: MLS Next and New Logo?

MLS is not afraid to have a press conference and, as a matter of fact, they love press conferences. So they had one yesterday to show everyone their new, shiny logo. Or to show their new 22 shiny logos. Yes MLS Next is here, which I'm not sure what is happening to the current MLS or where it's going to go. Much like the new iPhone, MLS Next is sure to be innovative and have a bigger screen. 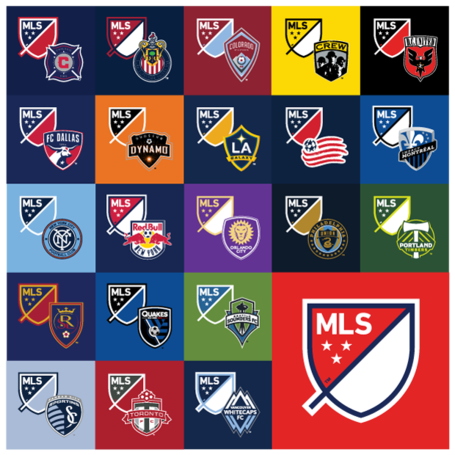 Funny, they wasted all that time on a Chivas logo.

The main draw was in fact the logo, so what does the staff here think about it? I asked them just that.

Nicholas Youngstein - It looks like the US Soccer crest. I guess they thought the old logo was a bit cartoon-ish and gave the boot the boot.

Heather Reppert - I like it overall. However, my OCD is kicking in with the line that goes outside the crest. It confuses me. What's the point of it? If they got rid of that seemingly pointless line I'd give the logo better grade.

JC Escobar - I like it, but with the boot and soccer ball gone, people are going to think they're selling real estate.

Eugene Rupnski - Looks like something an MLS executive's second-grader drew in art class to explain what daddy does for work.

Eryin Wandel - It's not bad. It's technically done properly and all the rules apply and it looks alright. The more I see it, the less I hate it, especially when you see it on a jersey (LA example that is floating around).

This does not say I like it, it is WAY too simple, making the whole simple look not feel right. Take bumpy pitch's logo, that's simple, but it has a "wholeness" to it. This just looks like a default logo for generic soccer video game as Dan mentioned. They explain it all out and it has meaning, great, I could assign meaning to anything and have it work. Doesn't mean it needs to look like that.

Also the line, WHY IS IT OUT!? Yeah, they explain that too, but I DON'T CARE! OCD, it's stupid.

Overall, it could be worse, we still don't have the worst league logo, but I wouldn't say we have the best.

This makes me actually like our current logo, but I am glad they rebranded (after talking about it for a while), I just wish they did a better job.

Dan Kenworthy - 2 points as your question eludes to something more.

1) Thought of the crest is like it's a default emblem or logo for your video game character, that you then end up changing once you level up enough and do it practically right away when you are able to.

2) They are branding the release of the logo, and everything else, as MLS Next. This is something more. There are things in the works and coming that may change the league as we know it, and this is possibly the first step. Especially if things more could be where a generic, interchangeable logo, is necessary.

Andrew Stoltzfus - The more I look at it the less I think it's terrible. If the slash didn't extend outside of the crest and there was maybe a half soccer ball coming out of the slash into the lower empty half I think it would be great.

Jared Young - I wasn't a fan of the old logo. The soccer ball seemed too in your face and desperate. Simplicity is the new design standard it seems, and the new logo falls in line with that, grabs from the crest tradition but gives it a modern update. It doesn't blow me away but I like it. I'm not a fan of the team versions however. I get why they are doing it but it reminds me too much of the single-entity structure of the league.

John Rossi - I was a fan of the old logo. The new one may be cleaner and more modern, but it doesn't look like a real major league logo. It's way too plain. Also, team-specific league logos seem incredibly unnecessary and totally bizarre.

In the grand scheme of things a logo is a logo. I don't really notice the league logo to begin with so having a gigantic press conference announce something I routinely don't notice doesn't really do anything for me. I also don't buy that this very plain and simple logo represents anything significant for the league. Like Eryin said, I can slap whatever meaning on anything I do and tell you that it has meaning. The MLS has not impressed here.

The logo is boring, but again it's a logo. I cannot, however, justify the representative nature in which MLS decided to unleash it. It doesn't need a 32 minute presser to tell us nothing. It doesn't need 21 accompanying logos specified for each team (mind you the reason for this is because MLS didn't want to be bogged down by the weight of a uniform logo). It certainly did not need to be announced in September of the 2014 season when it is to be officially the logo for next season.

I just can't seem to find a reason to talk about this new logo. The headline MLS Next doesn't really do anything for me either. The logo is uninspiring heading into a brand new era of MLS and at the perfect time for MLS to really wow everyone, they personally have come up short.

Good thing I won't notice it after too long.