Visiting Philadelphia for the first time to take in a Union match? Here is our ever-expanding guide of this to see and eat and do. Enjoy

Share All sharing options for: Visiting Philadelphia: Our visitors guide

Philadelphia is a vibrant city laid out with grand French style boulevards superimposed on a basic grid pattern. Philly has been called the smallest big city in America because of its neighborhoods. Each neighborhood has its own culture and style and while we don't really recommend spending a day driving around to confirm that, you may encounter vastly different people all hailing from separate sections of the same city. 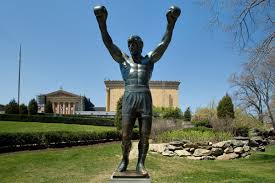 The first thing to know for any soccer fan is that PPL park is not in Philadelphia, it's in Chester. The waterfront of Chester is closer to Wilmington Delaware than it is to the Liberty Bell, think Stub Hub and Carson to LA as a comparison. So we certainly recommend staying in Philadelphia proper but make sure you rent a car because calling public transportation from Philly to Chester difficult would be generous.

Eastern State Penitentiary - Americas first prison, the insane asylum in the 12 monkeys, host to various paranormal investigative TV shows and a Soundgarden video. It's the coolest creepy place in the city.

Mütter Museum - The headquarters of the American College of Physicians (Philadelphia also houses Americas first medical school) is the site of a medical oddities museum. Wall of Skulls, babies in jars and the soap lady your thing? This is your spot.

Liberty Bell - a large cracked bell that played a part in some important event in the remote past.

Benjamin Franklin Parkway - Franklin and his legacy are everywhere in Philly. This is the place where tifo began, It's a wide grand boulevard lined with world class cultural attractions that ends where that boxer ran up the steps.

Rodin Museum - Yes Godzilla's famous foe got his own spot. Well, not really the Thinker is his signature work but the GATES OF HELL are way cooler.

Philadelphia Museum of Art - Rocky ran on the outside and a top notch display of art and such lies inside. The Armor Room is particularly neat.

Kelly Drive / Boat House Row / Water Works - Named for Philadelphia native Olympic oarsman John B Kelly, brother of Princess of Monaco, Grace Kelly. This picturesque riverside drive is perfect for a walk or run. It's lined with boat houses from most of the local universities, nice sculptures, a vue of General George McClellans mausoleum and hides the not to missed Water Works behind and underneath the Art Museum. 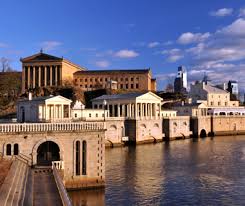 Franklin Institute - some guy and a kite who loved science and got his own place to showcase it, along with an IMAX theater to show volcano movies on.

LOVE Park - The iconic symbol of downtown Philadelphia housed in a far from sterile marble plaza.

Italian Market/South Street - Open air "Italian" market is great for the sites and smells of Philadelphia, great cheese and a quality cup of joe. South Street is a crummy tourist trap of a street with the best punk bar in the universe in Tattooed Moms.

Zoo - Hey Seattle! Philly invented zoos in America, so there

Philly is actually one of the culinary epicenters on the east coast with lots of young chefs doing wonderful things, but all anyone wants to really know is where do I get one of those cheese steak things, right? 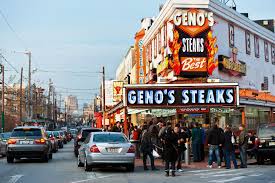 Pat's vs Geno's - Two huge and obnoxious looking open air joints face each other across an intersection like prize fighters before a match. Here is the skinny, most real Philadelphians don't really like either that much but they are a both good in their own ways. one is chopped the other is sliced and what side you come down on that argument has ruined relationships and tore families apart. Choose wisely.

Tony Lukes - Loud and boisterous and confusing and delicious, sliced of course.

Johns - small, loud and quick. The name is often whispered with reverence by devotees.

Phillips - Little more than a shack, but the South Philly glitteratti swear by this place.

Here is a little secret, steaks are good and all but the real Philly sandwich is ROAST PORK. Try it with sharp provolone and broccoli rabe, you won't be sorry.

Reading Terminal Market - An indoor festival for the senses. Lots of diverse food stalls and vendors.

You will see lots of Union gear here but not of the sporting nature. This is unfiltered Philadelphia, fantastic crabs, zero elbow room and all the Philadelphia youse guys can handle. A personal favorite.

Wherever you go or whatever you wind up cramming down your gullet, it always helps to become familiar with the local language. What's that you say? This is America and we speak all speak English? Au contraire homie, this is Philly, where the accent is vaguely Bostonian, kinda New Yorkey, with a slight note of unplaceable southern draw. We have a few words that may help you around town.

How to Speak Philadelphian

Wit or witout?: A question posed by every counter person when ordering a cheesesteak. It means with or without fried onions.

Nutter: in the soccer world so used to hearing English slang most fans would immediately think of someone who is a bit off.  Not in Philly though, he's the Mayor

Pretzel: it's Philadelphian for essence of life. The basic element of sustenance for most Pennsylvanians who eat them at a rate of 10 times the national average.

Jawn: literally a replacement for any noun and can be used as an adjective on its own. Examples of proper useage: 1.Don't touch my jawn. 2.Yo, that is the jawn

There is so much more I could write such is my boundless love for this city, but if you enjoy life and freedom and we all know that you do, you should enjoy Philadelphia. If you need some soccer travel related advice always feel free to reach out to @brotherlygame on twitter so that we can help you feel apart of our sporting community as well.