The Philadelphia Union play for their first trophy and host MLS' best team, the Seattle Sounders, in the 101st Final of the U.S. Open Cup. It feels like Christmas in September as we approach the game that even a Scrooge has to love.

The Lamar Hunt U.S. Open Cup is alive: to begin with. There is no doubt whatever about that. This must be distinctly understood, or nothing wonderful can come from the story that is about to be told. For despite the life in the cup, the oldest soccer tournament in the United States also has its collection of ghosts, and these ghosts have domain over all that has occurred over the last century.

Those ghosts may play a vital role in the outcome because the teams look relatively even going into the game. The Sounders currently boast the league's best record, but both teams are performing in a dead heat over the last ten games. Take a look at their recent results. 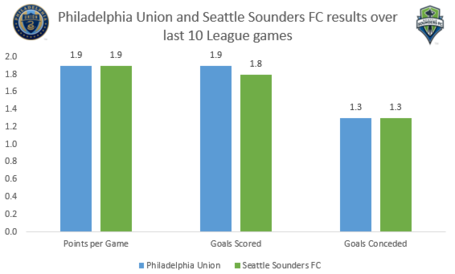 Both teams have averaged an impressive 1.9 points per match and both have conceded a respectable 13 goals. The Union have punched a single goal more through over their last ten.

Each team's recent run of form indicates the game will go down to the final whistle or even beyond. Here are three things that will very likely make the difference in the outcome, with an assist from Charles Dickens.

The game is in Philadelphia, and indeed the crowd may be the single biggest factor. The Union are the fortunate recipients of a coin flip, which decided where this game would be played.  The Union fans may not make as much noise as the 40,000+ faithful in Seattle, but at least the Union don't have to play in that environment. The Union fans will give the team all they have and the Union's "12th man" could be the difference.

2. "Now a pair of legs without a head, now a head without a body"

The Union should be the better rested side. The Union were at home in their most recent match so they have been home now for over a week. The Sounders on the other hand played in Seattle on Friday, and had to travel across the country to play this game.

Both teams played games this past weekend with big playoff implications. The Sounders chose to start a typical XI while the Union started five players who are generally considered bench players.  That extra bit of freshness from some of the key Union players may be the difference. Sebastian Le Toux, Cristian Maidana, and Vincent Nogueira, the core of the midfield, played only substitute minutes on Saturday. Carlos Valdes and Sheanon Williams did not play with the back four and should be fresh for the defense.

3. "Offenses carry their own punishment"

Ok, I'm altering Dickens' intention of the first word for my own purposes. Please forgive me. But these offenses can indeed punish. Both teams are blessed with dangerous scoring duos. The Sounders boast the best and most exciting forward pair in MLS. Clint Dempsey and Obafemi Martins have electrified the league combining for 24 goals and 16 assists this season. They both are difficult to mark on their runs, make excellent passes in the final third and are efficient finishers.

But the Union host one of the surprise scoring duos of the season. Sebastian Le Toux and Conor Casey have combined for 20 goals and 8 assists this season. Most of that damage has been done under new coach Jim Curtin.

The Union duo in fact may be the hottest of the two pairs. Over the last 18 matches Dempsey/Martins have 12 goals and 9 assists while Le Toux/Casey have scored 18 and assisted on 7. Dempsey did take time off for the World Cup which factors into the slowdown in the numbers, but the Union pair have been red hot and are just as dangerous.

Curtin has done a fine job juggling injuries, summer transfer additions, and international windows. He now has the rare opportunity to start his best players, and expect him to do so. He will keep the same 4-2-3-1 formation he has favored since taking over and the lineup should look like this: 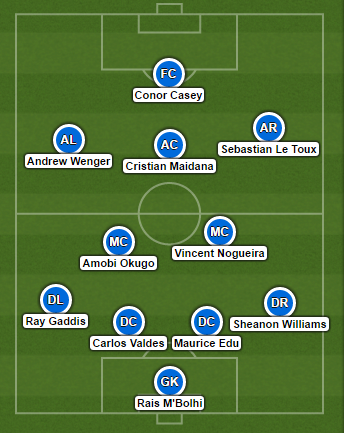 The Union will concede most of the possession and look to strike on the counter. The primary focus should be to sit back and contain Dempsey and Martins while making sure Brad Evans and Lamar Neagle do not threaten from the wings.

Everything points to a tight game where phantoms may involve themselves in a bounce here or a call there and decide the outcome. But in the end, the counterattacks that have served the Union well late in the season will see them to the podium. The Union will open the scoring with a rare goal from Cristian Maidana. The Sounders will equalize with a strike from Dempsey, but the season's savior, Sebastian Le Toux, will score late to win the trophy. The Union win 2-1.

But beware: the air will be filled with phantoms, wandering hither and thither in restless haste, and cheering their side as they go.

With sincerest apologies to Charles Dickens

What are your thoughts on tonight's game? Let me know below!