Share All sharing options for: Cup Final Day - One of the greatest days of the year Part I - The little and big of it

The World Cup Final. MLS Cup. The Champions League Final. All three are big days in the calender of soccer fans in the US. The US Open Cup Final? Not so much because the MLS cup is the big trophy for MLS teams to aim for. However, it is still a big moment in Philadelphia Union history as it's the first chance at a trophy in team history. If you are not excited for this Final, then you are missing the point of being a soccer fan.

If the only thing that mattered was winning the "big one" then fans would only support the Manchester Uniteds and Barcelonas of the world. Obviously that's not the case. While fans of the lower league teams are unlikely to enjoy winning the league, or champions league, they get just as much enjoyment out of the smaller teams avoiding relegation, getting promotion, and even winning trophies that are not the big one of that country.

Growing up in the small town of Peterhead, Scotland, I am a Peterhead fan. The team averages around 500 fans so obviously aren't a big club. The club used to play in the Highland League, which is not part of the Scottish leagues. However, they did have plenty of trophies. Peterhead was league champions in 1988-89 and 1998-99. They won many other trophies in the late 90s, and just last year won their first piece of Scottish League silverware by winning the Scottish 3rd division (something I wish I could have been there for).

Even although I missed that trophy-winning day, I was able to have a few "Cup Final Day" experiences to write about. I'll start off with the smallest cup final that I "attended."

As a youngster, I wasn't lucky enough to play for a team that made any finals. However, I was lucky enough to coach some very talented kids. They had entered a national 8 and under tournament that started off locally. A win in the Aberdeenshire section, and it was the North East tournament and a trip to Aberdeen. They came 2nd in their group, but won the semi final and therefore booked their spot at Hampden.

Hampden, for those that don't know, is the national stadium of Scotland. The Scottish Cup, Scottish League Cup, and all Scotland home games are played there. It's Scotland's Wembley, if you will. Unfortunately, the size of he US is too big to have a set national stadium. If it was, say, Dallas against Seattle in the US Open cup, hosted at Red Bull Arena then the crowd would be lucky to break four figures. Going to a final at a famous neutral venue, with both teams having half a stadium of fans is sadly something MLS teams will likely never be able to do.

The "Cup Final" day came. I was picked up at Aberdeen and the bus went on to Hampden, which is about a 3hr bus ride away. That meant an early start although getting up for it was easy. 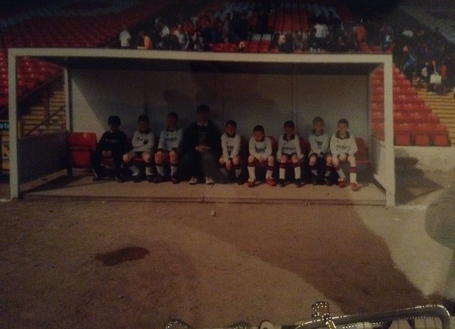 Once there, the way the finals day was organised wasn't as much a tournament, but it was all about fun, skill, and enjoying the day. Two teams from seven regions of Scotland all took part and were split into two groups with no Final. Each team played six games. My team (Peterhead Central School) won three of those games, and lost three. The good thing for my own arrogance is that there were two of us coaching, and I won all three games that I took charge of. 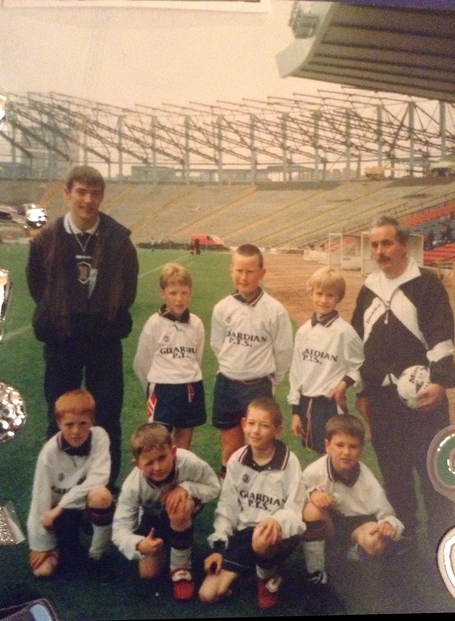 (Photo courtesy of Barry Evans - Team lining up before game 1)

Anyway, cutting the story short, the day was a great experience. It didn't matter that it was an empty Hampden park, or that it wasn't a major trophy. Everyone involved had a great day, and even got to meet and get autographs from then national team coach Craig Brown. Therefore, no matter how small a tournament, how small a crowd - there can always be something to remember forever on Cup Final Day. 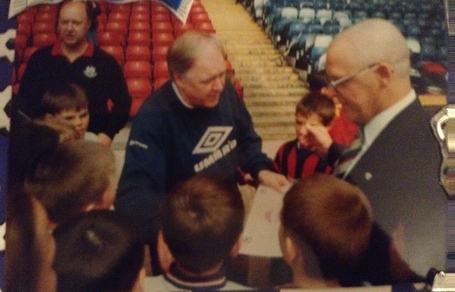 2) Even for the League Cup final, being at Wembley is amazing.

While story 1 was probably the smallest Cup Final I've been to, the biggest was undoubtedly the 1995-96 English Coca-Cola Cup final where Aston Villa beat Leeds 3-0. To those that didn't know, that was what the League Cup was called at the time. At the time, I had a link to Aston Villa. Therefore, when they beat Arsenal in the semi-final of the tournament, I was immediately on the phone to try and get tickets to the Final. Luckily, I was able to attend. Perhaps unluckily I was also able to see Les Miserables, as my grandparents were taking me down and had tickets to go.

On the day I could talk about staying in the team hotel or talking to Ugo Ehiogu after the game in the elevator, but that isn't what this is about. It's about the game day experience.

I went to the stadium along with 77,000 other fans, Wembley way - the bridge on the way to Wembley was packed. Equal numbers of Leeds and Aston Villa fans. The noise was (at the time) the loudest I'd ever heard (maybe only bettered by the time I went to Wembley to watch Scotland beat England 1-0 in 1999).

Before the game started, politicians were introduced to a chorus of boos. God save the Queen was sung (this is a strange event, as in the UK, national anthems aren't played for every game). Finally, The teams were ready and kickoff started. Outstanding players such as Keon Daniel's buddy Dwight Yorke, Tony Yeboah, Gary Mcallister and much maligned Savo Milosevic were waiting to try and score the winning goal.

20 minutes into the game, and it was Savo Milosevic picking up the ball. Nobody would have expected to see what happened next, as Milosevic ran towards goal, and unleashed what could be the best shot and goal of his career. The Villa end erupted, and from there it was almost all Villa with Andy Townsend controlling midfield

On to the second half and it's 1-0 Villa. Leeds had struggled, but brought on Brian Deane to try and turn it around. However, it was Villa getting the 2nd goal, with lifelong Villa fan Ian Taylor scoring a beautiful volley. 2-0 Villa, both goals good enough to win the trophy. It was all going well for the Villains.

Obviously at 2-0 in the final, Leeds were pushing forward to try and get back into the game. That left plenty of room for Villa to exploit and Dwight Yorke got the third goal of the game. It was all over from then and when the final whistle blew, there were no more goals scored. The trophy was lifted by Andy Townsend, and the celebrations began with Villa fans singing their version of New York New York.

So, that was the biggest final i've ever been to. The second biggest is going to be on September the 16th. Until then, keep an eye out for more cup final day stories, and learn that there isn't just one trophy to be excited about winning. Lets cheer on the boys in blue and gold for trophy number 1 in the history of the club.

**Editor's Note- What the author is too humble to admit is that his "connection" to Aston Villa was that his Uncle, Allan Evans, played for Aston Villa as a Defender, and was the assistant manager for this squad.**