How Important is Cristian Maidana?

Cristian Maidana is back and he's really important to this Union team. Is he important enough to be team MVP?

Share All sharing options for: How Important is Cristian Maidana?

Cristian Maidana made a welcome return to the lineup in the home and away series against Toronto FC, and the Union earned six crucial points. The Union offense was not clicking quite as well as it had been before Maidana’s hamstring injury, and his creativity in the final third was greatly missed. In the four matches under Curtin leading up to Maidana's injury the Union had scored 2.3 goals per game. During the five matches Maidana missed the team averaged 1.6.

It’s hard to imagine, but there was a stretch of four games early in the season when a healthy Maidana didn’t play more than 60 minutes in any game. Over those four games, he played just 126 of a possible 360 minutes as he got fit and acclimated to playing Major League Soccer. During that time there was talk of Maidana being a Designated Player bust.

Return to right now and Cristian is the dynamo that sparks the Union’s offense and he’s arguably their MVP. He’s not just great for the Union. He’s also one of the best set up men in MLS. Consider that he ranks second in the league in assists per 90 minutes with 0.57, behind only Landon Donovan. He ranks tenth in MLS in key passes per 90 minutes (passes that lead to a shot taken), right behind Thierry Henry and Diego Valeri. He ranks first in the league in assists per key pass, with more than 20% of his key passes resulting in goals. That means that more of his key passes lead to goals than those of any other player. He’s only played 59% of the available minutes this year due to the aforementioned adjustment period and the recent hamstring setback, but he’s already established himself as one of the best attacking midfielders in the league.

As far as the Union are concerned, Maidana’s impact goes beyond just passing in the final third. Take a look at the points per game the Union have earned when Maidana starts compared to when he was a substitute or did not play. Given the very different performances of the two Union managers this year, the points are broken out by tenure. 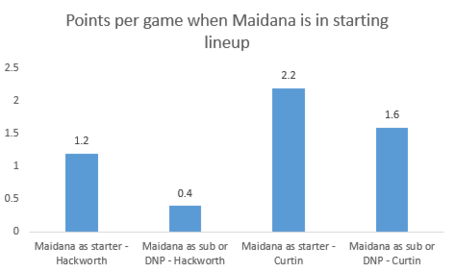 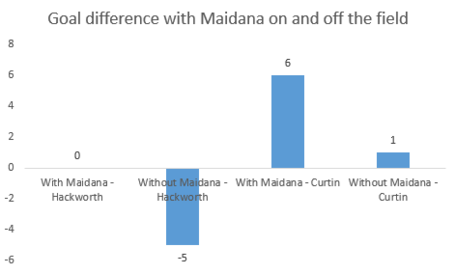 It’s unlikely that one player can have that much impact based purely on his play. There is a domino effect in the lineup to consider as well. The Union do not boast a deep trough of attacking midfielders, so when Maidana in on the bench, both managers have opted to bring Nogueira out of position and into a central attacking role. This is not the ideal spot for Nogueira. However, when Maidana is in the lineup, Nogueira has been placed further back in a box-to-box midfielder role, where he is more ideally suited.

Maidana’s play and the domino effect he has on the lineup has a significant impact on goals scored and allowed. Note how Maidana’s presence actually influences the defensive results more than the offensive results. 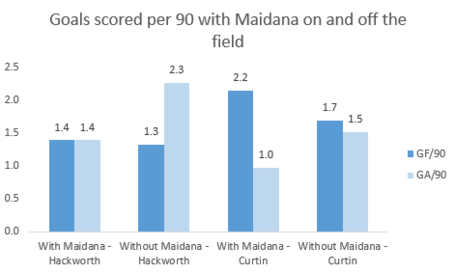 Maidana’s impact on the offense is more pronounced under Curtin. The team is averaging .5 more goals per 90 minutes when he is on the field under Curtin. Interestingly this is not due to the Union taking more shots. In fact, when Maidana is the playing the Union attempt fewer shots per 90 minutes. This trend also holds up across managers, although the difference in both cases is very small. 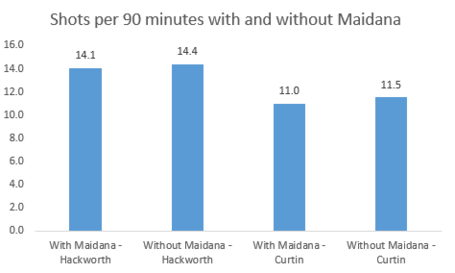 The Union don’t shoot more frequently with Maidana in the game, so they must shoot more accurately when he is. Remember back to the stat about the percentage of Maidana’s key passes that result in goals. He leads the league in that statistic and that efficiency drives to a higher shooting percentage, especially under Curtin. 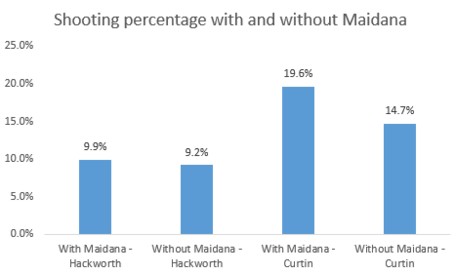 Despite playing only 59% of his team’s minutes so far, I believe these numbers put Maidana in the conversation for team MVP. Arguments can be made for Conor Casey who has brought more than stability to the striker position, or Sebastian Le Toux whose offensive resurgence has been vital, or even Vincent Nogueira who handles the ball more than any other player on the team, and does it exquisitely. But the team’s goal differential is +10 when Maidana is in the game compared to when he is not, and he is one of the best set up men in the league. Add to that, he's had that impact while only playing 80 minutes or more in 11 games this season.

Let's hope Maidana is at his best during the U.S. Open Cup Final and last 7 regular season games. This team is significantly better when he is on the field.