SKC-Union analysis: Losing the possession battle is not losing the war

The weekly post game analysis digs into how the new Union are giving up the possession battle but not giving up the battle for good shots.

Share All sharing options for: SKC-Union analysis: Losing the possession battle is not losing the war

Union fans are anxious to see if Curtin's new approach and their new goalkeeper are good enough to win the US Open Cup and make a run at their 2nd ever playoff appearance. But patience was the virtue as the Union made the difficult trip to Sporting Kansas City. While the Union needed a win, fans could not expect one. And the new goalkeeper Rais M'Bolhi is in the process of getting fit. Union had to be happy with the 1-1 result even if there weren't many answers to be found.

Digging into the stats there is even more reason to be hopeful going forward. As Curtin suggested at half time, the Union were perfectly happy to have just 30% of the possession in the match. But it's how they handled each side of the ball that show the team's improvement within the system.

The game funnel reveals the absolutely absurd difference in completed passes in the match. Sporting Kansas City completed 536 passes, the highest amount by any Union opponent this year, while the Union completed just 176. But as you can see where the funnel gets a little twisted, the Union were able to create more and better shots with their possession than Kansas City. The Union actually won the shot in the box ratio collecting 60% of those shots. 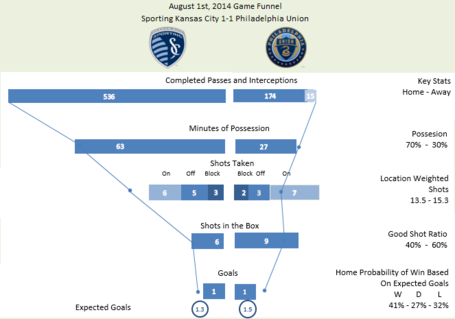 Continuing the shot efficiency analysis, the Union were excellent managing shots taken and allowed in the game. The Union took .32 shots in the box every minute they had the ball and held Sporting Kansas City to just 0.10 in the same metric.  The Union's measure was twice the MLS average. This efficiency effectively neutralized the game and in fact turned it into the Union's advantage. The Union's expected goals was 1.5 to Sporting Kansas City's 1.3.

On the eve of the All-Star announcement Maurice Edu showed why he was invited. He tallied impressive defensive statistics across the board and was solid in his passing. He had 6 clearances, 5 tackles, 3 interceptions, 1 blocked shot and an offside won. He also completed a team high 83% of his passes including 75% over 25 yards. Edu was a big reason why the Union defense was able to hold Kansas City to so few shots relative to their possession.

There weren't any bad games this week but there were a bunch of meh games. Amobi Okugo did little to make an impression on the game. He completed just 72% of his 25 passes and otherwise didn't pile up any significant numbers. Cruz completed just 58% of 12 passes, but 2 of them were key passes. As Gaddis tallied the lone assist and super sub Brian Brown headed home the lone goal, it was a quiet night for the midfielders and starting strikers.

The Sporting Kansas City match wasn't the first time the Union showed improved shooting efficiency under Jim Curtin. On both the offense and defense the Union are doing a better job of creating shots and keeping their opponent from taking shots. Under Hackworth the Union completed 42 passes for each shot taken and under Curtin that number has dropped to 35. The defensive improvement is even better. Under Hackworth opponents completed 39 passes for every shot and that number is now up to 52 under Curtin.

Much of this change is due to the deliberate bunker and counter strategy being employed, but it's good to see the numbers backing up the strategy. The Union have been able to cede possession without relinquishing the advantage on shots taken. The Union have allowed just 3 goals in the last 3 games, indicating the defensive focus may finally be taking hold. 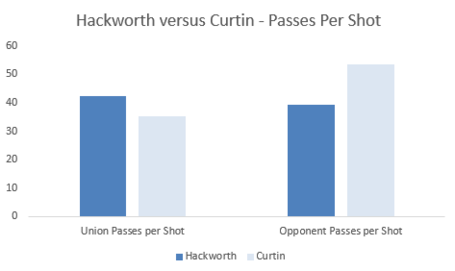 The Union's next three MLS matches are against teams at the bottom of the league. They face Montreal at home, then travel to Houston before returning home to play San Jose. After that the schedule gets considerably more difficult. It will be interesting to see if Curtin changes strategy against more manageable opponents and looks to control possession. It will also be interesting to see if the addition of Valdes to the backline gives Curtin more confidence in the team playing more assertively.

Despite the positive trends the questions about the team remain. Now Union fans can look forward to Rais M'Bolhi and the August schedule for answers.