By The Numbers: Who should play on the left: Cruz, Wenger or someone else?

Danny Cruz and Andrew Wenger have held down the left side of the attack under Jim Curtin. Who has been performing better, and what will happen when Maidana returns?

Share All sharing options for: By The Numbers: Who should play on the left: Cruz, Wenger or someone else?

Ever since Jim Curtin took over the reins nine MLS matches ago, Danny Cruz and Andrew Wenger have been the interchangeable pieces on the left hand side of the Philadelphia Union's attacking midfield trio in the 4-2-3-1 formation. They have directly subbed for one another in 8 of the 9 matches, the lone outlier being the New England away match where Wenger played 20 minutes at striker, replacing Conor Casey. The questions to be addressed are twofold. 1) Who has been more effective with their minutes? 2) And when Cristian Maidana is healthy, should he replace them on the left side?

Without looking at the numbers, the answer to the first question is probably tainted somewhat by expectations. Danny Cruz has had a solid year but that is relative to low expectations he set last season. He has scored some big goals and assisted others and generally been a positive presence. Andrew Wenger has also had a solid year but he was a replacement for one of the fan favorites in Jack McInerney, and was already considered a Super Draft bust. Wenger also makes $100,000 more in guaranteed compensation. Mix all that together, and the consensus seems to be that people are pleased with the Cruz minutes and less so with Wenger's. Of course all of this was thrown up in the air by Wenger's performance against the San Jose Earthquakes. He scored two "in your dreams" goals in that match that lifted the team to a much needed three point result.

Here's a look at the minutes of both Cruz and Wenger since Curtin became interim manager.

Danny Cruz has logged 488 minutes, or the equivalent of 5.4 games and Wenger has played 331, minutes or the equivalent of 3.7 games. Cruz has a goal differential during his minutes of 0 with 7 goals scored and 7 goals against. Wenger has a goal differential of +4 with 12 goals scored and 8 goals against. It might seem shocking that Wenger has been part of so many more goals than Cruz, give he's played fewer minutes. But it's not all that strange. 41% of all goals in MLS occur after minute 60, and the Union score more than 50% of their goals after the 60th minute. Considering most of Wenger's minutes have come as a substitute, it's therefore not surprising the team has scored a few more goals overall. Wenger has scored 3 goals and assisted 3 others. Danny Cruz scored the goal against New England and has no assists. 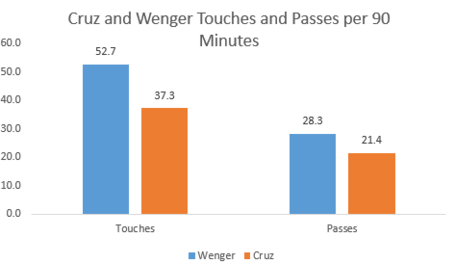 Wenger is more involved in the game during his minutes. He averages about 40% more touches and 33% more passes when he is playing. This level of engagement as a left wing is solid by MLS standards. Pure left wingers who have played more than twelve matches per game this year average 21 passes per game. 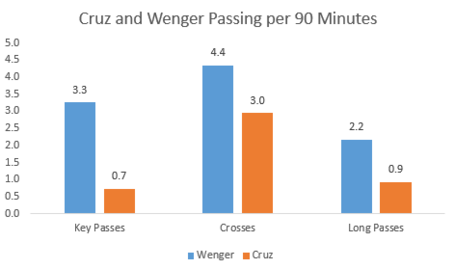 When looking at pass types, it's evident that Wenger is clearly more of a risk taker when passing the ball as his number of crosses and long passes is higher per 90 (even as a percent of passes), and his passes generate shots for his teammates at a much higher rate. Wenger's 3.3 key passes per 90 minutes would actually rate at the top of MLS with the likes of Graham Zusi and Javier Morales if he were played enough minutes to make the threshhold. 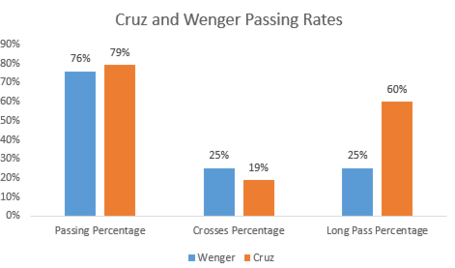 With the exception of crosses, Cruz completes a higher percentage of his passes, but that could easily be a function of the riskiness of the passes. Wenger's completed crosses (when multiplying crosses attempted with the completion percentage) rank with average left wingers while Cruz's a good deal below average. Both players are below average in both long pass attempts and completed long passes. 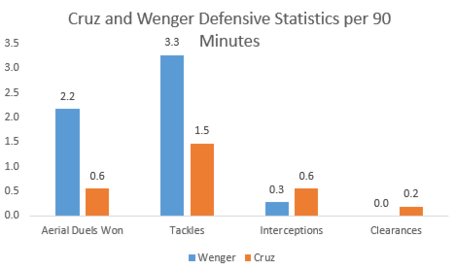 While Cruz holds a slight advantage in clearances and interceptions, Wenger is notably stronger in the air and in making successful tackles. Neither player is considered a defensive stalwart, but Wenger appears to have the advantage defensively.

So far Andrew Wenger has a decided advantage in +/-, goals, assists and key passes. He's more engaged in the flow of the game and has a bigger impact. But here is the downside of Wenger's risk taking. 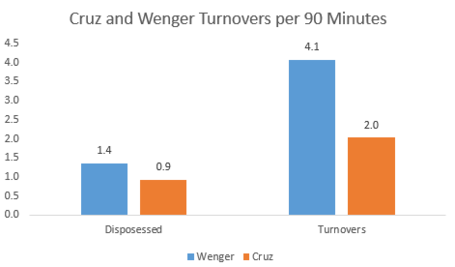 Summary and Looking Ahead

Wenger is a more productive player when looking at offensive and defensive stats per 90 minutes. In fact, Wenger is performing as an above average left winger when adjusting his minutes to reflect a full match. But he is more of a risk taker with his passes and as a result turns the ball over much more frequently than Cruz.

The next question is what happens when Maidana fully recovers from his hamstring injury? The Union have lacked that extra creativity in the final third that only Maidana can bring, and his return to the starting squad is definitely needed. One option is for him to replace the Cruz/Wenger duo. The other is for him to replace Noguiera as the CAM and keep Cruz/Wenger on the left. But sliding Nogueira further back to his more natural 8 position would create a log jam in the central midfield with Maurice Edu, Amobi Okugo and Vincent Nogueira. One of them would have to sit if Curtin does not want to slide Edu or Okugo back to the center back spot and replace Ethan White. Should Wenger/Cruz play over Maidana, Nogueira, Edu or Okugo?

What would you like to see going forward at the top of the formation? Take the poll below, and weigh in.

All stats in this article are from whoscored.com