16 teams, 73 players all went to Camden on a Sunday afternoon to raise money for Kensington and Camden Youth Soccer Clubs. This is the story of how four of them have earned a spot in national finals in Florida.

Share All sharing options for: No Ice Buckets Needed To Raise Money For Camden And Kensington Youth Soccer Clubs

In 2013 there were 13 teams registered. This season that number increased to 16 despite a late change in date and location that ended up coinciding with other tournaments. By any person's math that is an improvement. Before reporting the story I'd like to thank  all 73 players who took part. It is a good sign that the Sons of Ben had to just give a donation, as all the players they asked to play had already "signed" for a team. Also, thanks again to WaWa who supplied enough water and pretzels to keep the players and volunteers hydrated and satiated.

Unlike last year's tournament there were no traffic issues and everything was organized and started in a much more timely manner. The 16 teams were split up into four different groups for the initial group play. Each team would get to play three group games with the top two teams qualifying for the quarter finals. In order to give everyone four games minimum, we had the 3rd place teams play each other and the 4th place teams  play each other, giving the qualifying teams a little break before the quarter finals.

Group 1 comprised AO Philly, Trenton Social, Byron's Boys and the Brotherly Game's own "Outerwhere FC."  While I don't have the results of that group, I am reliably informed that it was the closest group of the tournament, with the top 3 only separated by goal difference. Coming out on top were Outerwhere FC, with Trenton Social claiming 2nd place. The unlucky teams was Byron's Boys, with AO Philly ending up at the bottom of the group. 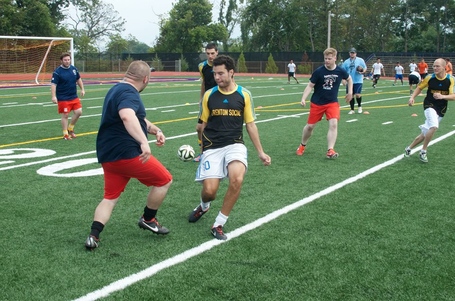 Group 2 was made up of Sauken Indians, Fuzzy Footballers, Philadelphia Footballers and The Mix FC - a mix of a couple of teams who had to merge due to the change of date. It's great to see that it didn't turn them off of coming out for the day. In a series of high scoring but very close matches, it was Philadelphia Footballers who won all 3 of their games. In 2nd place with 2 wins were the Sauken Indians, who had taken advantage of a tired The Mix FC having played just before their game. The win against The Mix was what put them through in second place, as the Mix had won their game against Fuzzy Footballers. This was a group that the decision to allow 3rd and 4th place teams play against the other 3rd and 4th placed teams may have changed the outcome of the group, as The Mix weren't able to get a "revenge win". In last place, Fuzzy Footballers may feel hard done by getting put in a tough group, but they probably did have the best team name of the tournament. 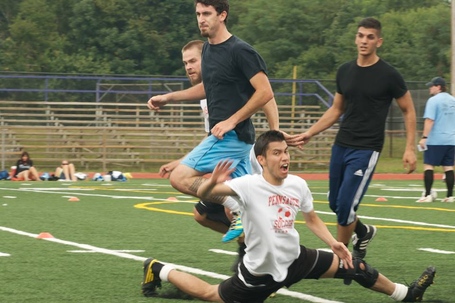 Last year, the winning team included the top goalscorer. This year had the strange occurance that the top goalscorer in the tournament did not play for a team that qualified for the quarter finals, as the Majestic Strikers Marvin Irvin ended up top scorer with 18 goals in the 3 group games he played. Unfortunately, he may have wasted 12 of those in one game, and could have used some goals in other games of the group. 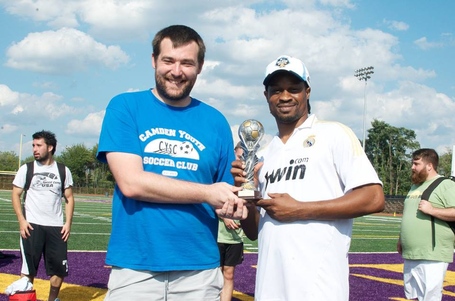 The best team in group 3 turned out to be Prestige Worldwide, who won all 3 of their games including a close 6-4 win against Majestic Strikers. The team that was on the end of Marvin's 12 goal game were the Scrubs, although to be fair - they were just players who wanted to play for fun, and got together on the day without actually playing any games prior together. When they get scared by people talking about tactics, you know they are only in it for the charity. The important game of the group was the last game, where Majestic Strikers were up against ME Gunners. At the half-time point of the game, it was 2-1 to Majestic. However, a goal in the second half by ME Gunners tied the game up, and then Majestic got caught on the break twice giving ME the win, and leaving Majestic Strikers to play a game against another 3rd place team. 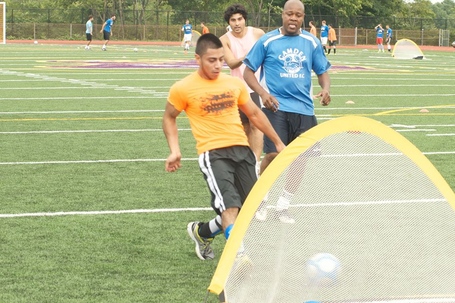 The final group included CREAM, Grape Train, Braziladelphia and Soccer Players. Winning the group was CREAM, who were easily the best team, winning all games by a minimum of 4 goals. In second place, not following the Germany vs Brazil scorelines (yet) were Braziladelphia, captained by CYSCs own Bryan Leib. The third place team was Soccer Players and in last were Grape Train. 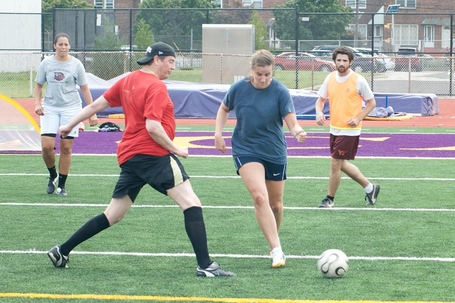 The fun games of 3rd vs 3rds and 4th vs 4ths were up next. Grape Train and Majestic Strikers were among those who took advantage of those matchups to get a morale boosting win. However, the important games were the quarter finals. Not only would the winners of those have the chance to play for medals - but this year one improvement we made to the tournament was joining up with Challenge Sports to be a qualifier for the Challenge Sports 3v3 Naitonal Championships. All 4 semi-finalists would qualify for the event (if they want to participate).

The quarter finals started, and in quarter final #1 it was Outerwhere FC (The Brotherly Game team) against Sauken Indians. The winners turned out to be Outerwhere, as the experience they showed from being in the same stage at last seasons tournament worked, they had conserved their energy well enough, and qualified for the national finals. In quarter final 2, it was a close, tense game, but Trenton Social fell at the same stage as the year before, as Philadelphia Footballers claimed the second national title shot.

The third quarter final was between Prestige Worldwide and Braziladelphia. While Brazil lost in the semi-finals, there was to be no semi-final for the Phialdelphian "Brazilians". Prestige Worldwide managed to relax, and won 9-2 in what was an easy encounter for them. The final quarter final went all the way to the end, and was tied with a couple of minutes to go. However, just like they did in their final group game, ME Gunners snatched victory at the end to advance to the semi-final stage.

That meant that Outerwhere FC, Prestige Wordwide, Philadelphia Footballers and ME Gunners are the 4 qualifiers from our tournament. While they have qualified, the cost of flying to Florida, the hotel as well as entry fees mean that some teams don't participate. If these four teams want to go, I hope everyone will happily help out with their fundraising, as local teams doing well in national finals can be a good thing, as seen by Taney Dragons at the LLWS recently. 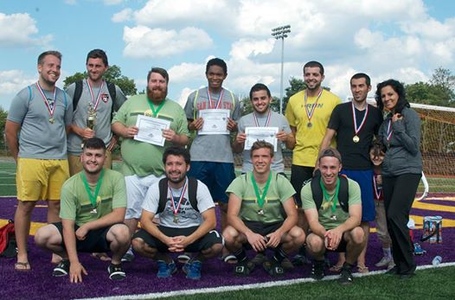 (3 out of the 4 national final qualifiers with their certificates. Congrats to all - Photo courtesy Gerhardus Van Wilgen)

It was on to the semi-finals, and in semi-final one, Outerwhere FC was missing DoopCast member Richie, who had to leave for an emergency (either that or go and stand in the misting station that we added to try and keep everyone cool this year). Maybe because of this, maybe because of an injury to Eryin Wandel, or maybe because the other team was just far better, it was an easy win for Prestige Worldwide as they went on to the final. Perhaps importantly, they also were able to conserve energy, and saw out the game professionally. In the other semi final, it was another close game as ME Gunners took on Philadelphia Footballers. Unfortunately for the Philadelphians, it was ME Gunners who took the game. Maybe inspired by their name-sake Arsenal's recent trophy wins, they were going for the win.

The final was set, it was ME Gunners vs Prestige Worldwide, and a replay of the group game that Prestige had won 6-2. Before then, the 3rd place game was played and like many 3rd place games was a very friendly affair. Outerwhere was the team that got the medals for 3rd place as they beat the Philadelphia Footballers. In what may have been the goal of the tournament, Outerwhere went Scottish by playing the long ball- a punt out of the back by Andrew Stoltzfus was nodded home and it made the Scottish part of me proud to know players on the team.

In the final, as you would expect it was again very close, and ended up being decided by 1 goal. ME Gunners had a difficult run to the final, playing many close games whereas Prestige Worldwide were able to stroll to the final. Would the extra difficulty help ME in the final, or would it have tired them out? 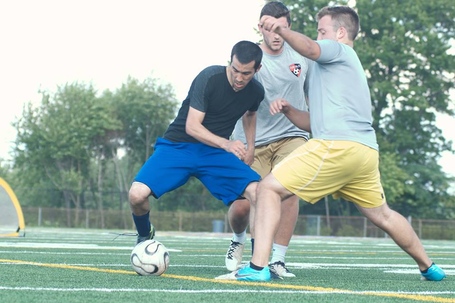 In the end, the extra tense build up may have hurt ME Gunners as Prestige Worldwide came out 8-7 winners. It was a great final to see, as you don't want a team running away with all the games like the Vezuvela Ukranians did last year. 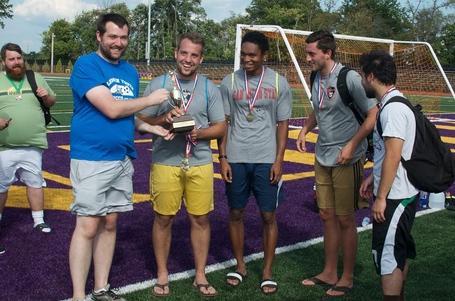 For more photos of the day, both Kensington and Camden have uploaded them to our facebook pages. Go there, have a look, and spread the word of both teams.

Of course the day isn't about winning trophies or qualifying for national finals. It is about raising funds for two of the important Soccer Clubs in the area. Both Camden Youth Soccer Club and Kensington Soccer Club have to run these fundraising events to keep things running and offering affordable soccer for the kids in both areas. It doesn't stop here and if you would like to donate to either club (without the need of ice buckets) you can find information about each club on their websites :-

You don't even need to donate money. Your time by volunteering is just as important. If you can't get to Kensington or Camden, find a similar club in your area. 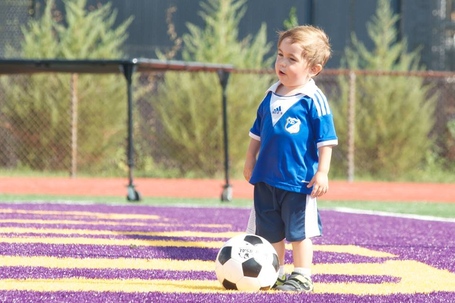 Thanks to all that played and donated, we managed to raise over $2,000 before costs. It was a great turnout  and we hope to see even more teams next year. Keep an eye out for the 3rd Annual Building Bridges Adult 3v3 Tournament information (as well as other fundraising ideas).