HOT TOPIC QUESTION OF THE WEEK: How does it feel now that the Union are in a Cup Final?

Consider yourself pinched. The Union are hosting a U.S. Open Cup Final. It's going to be awesome. The staff gets a little introspective and discusses what it means now that the Union are one game away from their first trophy.

Share All sharing options for: HOT TOPIC QUESTION OF THE WEEK: How does it feel now that the Union are in a Cup Final?

Hunkleberryfinn, the usual author of this post, has been swamped with a series of wonderful life events, but he did have time to say hello and raise this question to the staff. The U.S. Open Cup Final means a lot to the folks here, and these answers point to many different perspectives on what will be the biggest game in PPL Park history for the Philadelphia Union.

Heather Reppert: This means everything. I'm especially happy for the few players who are still left from the beginning to be able to experience this as a reward for all of their perseverance and hard work through the many changes this organization went through. As a fan, this is the ultimate reward. Also, bragging rights over NYRB would be absolutely amazing.

If we fail to win the final, I'll still be so very proud of our team.

Frank Cobbina: The prospects of hosting a Cup Final are exciting, but what really intrigues me is the possibility of the Union playing in the CONCACAF Champions League. I'm excited to see some better (ie. Mexican) competition here during the week that isn't just stopping by in Chester for some worthless friendly. How would the Union FO react, both in trying to attract the typical Union fan to come to PPL Park for these CCL matches and how much they upgrade the back of the roster to accommodate the uptick in matches.

John Rossi: I still really haven't processed it. I probably will once the 16th comes around, but it hasn't hit me yet. It's huge that the Union are so close to their first trophy in just their fifth year of play. A win against the Sounders would expose the team to continental soccer, which wasn't something that seemed reasonable just a few months ago.

While trophies are fun, and I like them very much, I will never get as excited for the Open Cup as I will for MLS Cup, or even the Supporters' Shield. The series of isolated, one-off matches kills some of the excitement for me.

In the regular season, a team has to be dominant over quite a long period of time in order to grab any silverware. It's great to be rewarded with the Shield at the end of a long season.

During the play-offs, there's so much excitement from the soccer community, even in markets that aren't involved in the postseason. Everyone is watching, and there are no other story lines aside from the MLS Cup. Though it's a crapshoot, and the SS is a better indicator of a team's success, the fanfare made in late November makes the Cup the most desirable trophy, at least in my mind.

Since the Open Cup occurs in the midst of the playoff race, it doesn't receive the attention it's due. While it is the most reputable competition in US Soccer history yada yada yada, it doesn't feel that way. The game is a side-show, not an event. It's on Gol TV, not ESPN or NBC. And there's a very good chance that you'll have to watch it on your computer. It's hard to get behind a Cup that has already been so marginalized by its own governing body.

While I'll be at PPL Park in September, and I'll go absolutely apeshit if they win it all, the US Open Cup will never be The Big One.

Doop Cast It still feels a little weird, almost as if it is not real. Five years has flown by and I feel very lucky and a little privileged for the U to be hosting the final. I am more nervous for the off-field ability of the U (and MLS / US Soccer) to market the final than I am of the opposition. Someone has to win so we have a good chance to get a cup in the cabinet and to be able to gloat at our 'cupless' noisy neighbors to the north. Is it wrong that I want to win to be able to rub it in the faces of Red Bulls fans almost as much as I want to win just to win?

JC I feel happy and surprised that we made it this far, but it means nothing if they don't win.

Barry Evans: I feel excited. It doesn't matter to me that it isn't the MLS Cup, the chance to win a cup is always exciting to me. To be able to go to the game, and perhaps witness a team that's just 5 years old lift silverware means i can't wait until September 16th. If they are able to win it, it's an amazing accomplishment considering the state of the team at the start of the season, and will allow us to mock the Red Bulls forever.

Eugene Rupinski: It's exciting and nerve-wracking. And while I'm very hopeful that they win, it won't be the end of the world if they don't. I think getting this far is proof that there is a reason to be optimistic about this team. The pieces are there, and with the right guidance (and perhaps a couple of tweaks) this could be a very good team for a long time to come.

Jared Young: When I read this question I was at a 3 year old's birthday party. It was one of those where I didn't know a ton of people outside of the hosts. So I was left engaging in mostly awkward conversation trying to find something in common with people at the party. All the time I'm internally assessing my feelings about the upcoming U.S. Open Final. Eventually I started talking with a guy who moved over from Germany 8 years ago. Naturally he is a pretty big soccer fan. That was all I needed. He told me his club is Werder Bremen, who finished 12th of 18 in last year's Bundesliga. He said he subscribed to an online channel in German where he can watch the matches after they are played. He still watches all the matches despite usually knowing the score.

He went on to say that decades back Werder Bremen rivaled Bayern Munich for titles and prestige, but in the last 6 or so years they have not been very good. He told me the story of how Bayern Munich had the vision to become an enormous football club, while Werder Bremen did not have that same business acumen. As a result, the club is slowly starting to become an afterthought in the Bundesliga despite their large following. He admitted he wondered if Werder Bremen could ever be great again given the changing financial landscape of football in Europe.

The conversation left me more appreciative of this time with the Union and their run to this historic cup. The world of soccer can be very cruel. There are so many things that have to go right to win and win consistently. We can never take this moment for granted. We could have a terrific team like Sporting Kansas City and not be in this final. You just never know. But right now the Union are in it. They are hosting it against one of the League's best. It really doesn't get any better.

Eryin Wandel: I'm beyond pumped. Skipping classes and a lab to make it. And I echo what everyone has said in a way. It would be amazing to win, but even to make it this far AND host it, amazing. (Seattle is not going to be easy.)

Also hope the FO markets the crap out of this. We NEED to fill the stadium. People told me we'll fill it, but I have my doubts.

It's also really cool to see this in the local newspaper 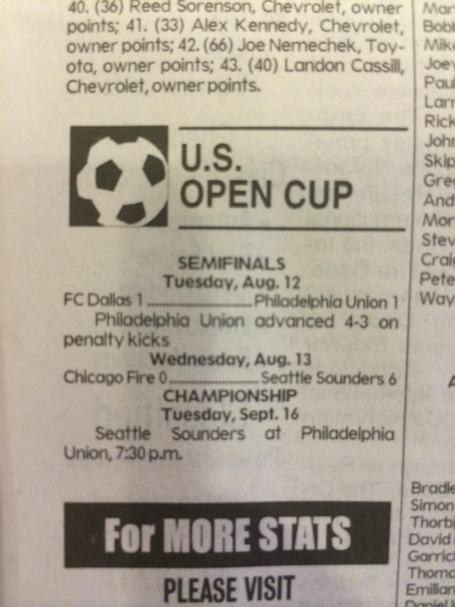 Matt Reppert: It feels amazing. If the Union are able to pull it off and beat Seattle, it puts us in the category of "Teams that have won a trophy" not to mention it puts us into the CONCACAF Champions League next year.

Seriously, imagine that for a moment, the Union could be competing in the biggest club tournament in North America in 2015 if they can pull it off.

I am nervous about Seattle, if there is one team that takes the Open Cup seriously it is them. But it would be so SATISFYING to beat them because it would shut up the Seattle supporters that act like Soccer was invented in Seattle in 2009. Not to mention that as others have said, it would give us bragging rights over the Red Bulls until the END OF TIME.

Matt Ralph: I think it's incredible not only that they're in the final but that it's being held at PPL Park. I just hope they can win and that the stadium is full. As great as it would be to win a trophy for a club so early in its history, bragging rights over Red Bulls and Championship League next year would be oh so sweet.

The moment is here Union fans. Savor it. Add some to your morning cup of coffee. Hold its hand and take it for a long walk. Feel it blow through you hair and take some time to roll around with it. Listen to its laughter. The moment will be gone in a brief instant. They don't come often and they don't come without their share of pain - the many heartbreaks from the experiences needed to play in this game. In the end, the moment will turn into a memory. It may bring joy and it may bring sorrow, but it will be the Union's moment for everyone to share.