The Philadelphia Union Hope To Be Earthquake-Proof vs San Jose

A Home game against a team 8 points away from the playoffs, should be a win right? Lets see how the game should play out.

Share All sharing options for: The Philadelphia Union Hope To Be Earthquake-Proof vs San Jose

At full time last Friday, the Union players were coming off a hectic schedule that had the team playing 300+ minutes of soccer in the space of seven days. This week, it's San Jose who are the team that have been playing a lot of Soccer (180+ minutes since the last time a Union player kicked a ball in league play). In one of those two games, they got thumped by the same FC Dallas team that got knocked out by the Union from the US Open Cup. They also managed to get a very respectable 1-1 draw in Seattle. However, just like the Union's tiredness struggles last week, San Jose are likely to be gassed with all their travel and play this week.

Since they won the 2012 Supporters' Shield, things haven't gone entirely to plan for the Earthquakes. They missed out on the 2013 MLS Playoffs on goal difference, and this season sit a long way out of the playoff spots (although they do have a better points per game ratio than the Union do). One reason for this may be the injury problems the team has faced, and that hasn't cleared up for this game. They will be missing a guy that loves to score against the Union in Steven Lenhart, as well as a defensive stalwart in Clarence Goodson.

In the past, San Jose have not been a friendly team for the Union to play, as the 'Quakes have won four out of six games they've ever played against the Union. Last season, a Shea Salinas goal was enough for all three points. The Union hope they can build on a first "moral victory" against FC Dallas by beating a team they tend to struggle against.

The Union building on recent success.

Whereas San Jose are missing players from injury, Philadelphia only have doubts over Cristian Maidana and Fabinho. Rais M'Bolhi is unlikely to feature yet, so Zac MacMath should get the nod in goal. They will be looking to continue the run of good form that has seen them reach the final of the US Open Cup and lose only 2 game since Jim Curtin took charge.

3 Important Matchups that the Union need to dominate to win 3 points:-

Carlos Valdes vs Chris Wondolowski - Forget the miss at the World Cup, if Wondolowski gets a chance, usually he will put them away. It is likely going to be up to Valdes to keep Wondolowski at bay. Since coming back to the team, Carlos has played relatively well, playing with people for the first time in both games. Lets hope he is able to keep Wondolowski in his back pocket, or else the goals will likely fly past MacMath in goal.

Sheanon Williams vs Shea Salinas - Sheanon Williams was one of those players lucky enough to have a break last Friday night. He will likely need the rest as he will go up against old teammate Shea Salinas. Since moving away in the 2010 expansion draft, Salinas has either missed games against the Union through injury or scored the winning goal. He has had a productive season for the Earthquakes, leading the team in assists and chipping in with one goal.

Going the other way, Sheanon has struggled a bit since missing the preseason with injury. He has started to get into a groove lately however, and can get forward for goals as well as supplying assists with his long throws. Whoever gets the best of the battle on this side of the park may be the key to winning three points for their team. 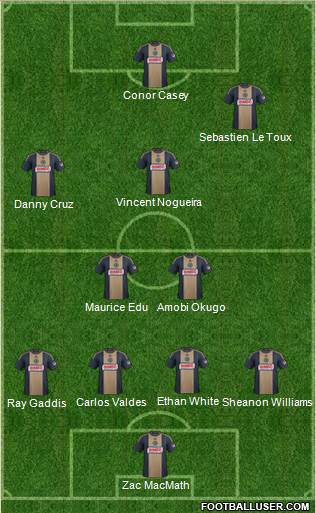 The Union had the week off, and should be recuperated enough to play their first choice lineup (out of those that are healthy). Cristian Maidana will be able to come off the bench for some much needed minutes, and Zac MacMath should be up for starting with Rais M'Bolhi unable to get to 100% in time.

The Union are on a high despite the loss in Houston, and San Jose should be there for the taking. This is a result that needs to go the Union's way, and will give us all a free haircut getting all the points available. Conor Casey, Sebastien LeToux and Maidana to get the goals while Shea Salinas gets one for the 'Quakes, as they barely register on the (Ryan) Richter scale.