Should Ray Gaddis be on the left or the right?

Both managers have been slinging Ray Gaddis from one side of the field to the next. Here are five observations on how the team and individuals have fared when Gaddis is on either side.

Share All sharing options for: Should Ray Gaddis be on the left or the right?

Somewhere on the Union's list of needs is an upgrade at left back. There was a call for such a move in the off season, but Fabinho was given the job to start the season. He performed admirably enough that those calls dwindled and other needs became more readily apparent. But there was still a gap as the defense struggled. With both Sheanon Williams and Ray Gaddis capable at full back, ex-manager John Hackworth moved Gaddis over to the left side while Williams manned the right side. As that small leak was getting plugged the leak at center back was gushing open. Williams was asked to help in the middle, leaving it open for Gaddis to play on the right and Fabinho to return to the left. Then Ethan White emerged and Williams once again became available at full back. Interim coach Jim Curtin kept Williams on the right and moved Gaddis over to the left for his second stint of the season.

The result of all this movement is that Ray Gaddis has played 15 games at right back and 8 at left back (he split right and left back in 1 game). The question is how is he doing? And more importantly, is this a viable long term solution? Here are 5 observations of how the Union perform when Gaddis mans either side of the pitch. And there is also more interesting insight about the differences between Hackworth and Curtin's styles of play.

1.       The Union average more points per game and allow fewer goals per game when Gaddis plays on the left.

There are certainly more factors at play than where Ray Gaddis is lining up. And of course this may have nothing at all to do with the play of Gaddis himself and more to do with what other players get time. For example, could Williams on the right be that much more valuable than Fabinho on the left? The chart above also reveals that Gaddis on the left was not successful during Hackworth's tenure. Could it only be under Curtin's style of play that Gaddis on the left is more successful?

2.       Ray Gaddis is less aggressive defensively from the left 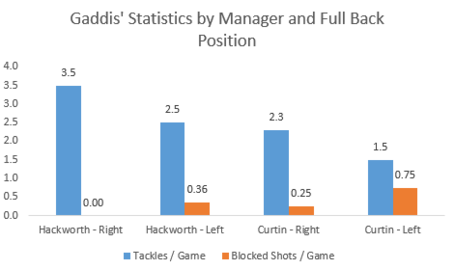 Ray Gaddis is currently 7th in MLS in tackles per game. That's pretty impressive. But he might be ranked higher if he only played on the right side. Under both Hackworth and Curtin, Gaddis averages less tackles per game on the left. However, he does block more shots when playing on the left. That might be because he plays a more conservative role when on the left, since it's not his natural side. Playing more conservatively would limit his tackles but keep him back deeper to potentially block more shots.

The tackle results are even more interesting when adjusted for opponents passes. Gaddis' tackles are way down under Curtin, especially given the increase in opportunities. That is likely due to a less aggressive defensive style under Curtin, where the defense is asked to absorb more possession by the opposing team. On a side note, Gaddis' interception and clearance statistics are flat to lower from the left hand side as well when adjusted by opponent's passes.

3.       Gaddis is slightly less effective passing the ball from the left 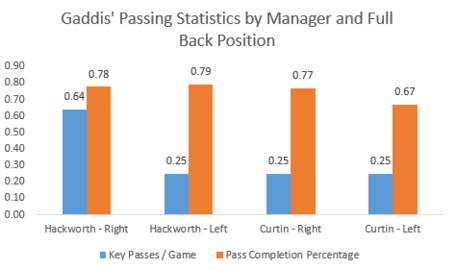 Gaddis' strong suit is not his passing in the offensive half. He ranks 174th of all players with 12 games or more played in key passes per game (256 players including goalies). Nevertheless, Gaddis averages less key passes (passes that lead to a shot attempt) from the left hand side. His passing percentage is down from the left, but only under Curtin. Gaddis is a more than adequate passer of the ball, but he may be struggling from the left hand side with Curtin's more direct long ball approach.

Overall Gaddis seems to perform slightly worse on the left than the right. His whoscored rating on the right is 6.86 and 6.65 on the left. This is hardly a surprise since he is not playing his natural position. The question then remains, why do the Union perform better when he is on the left, especially on defense?

4.        Fabinho has better statistics on the left than Williams does on the right 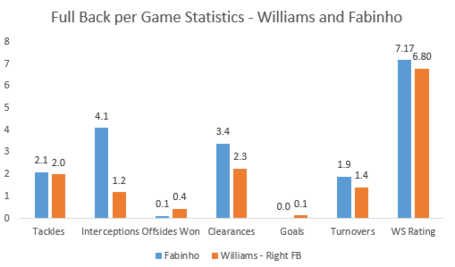 The immediate answer to the last question would be that Williams is playing on the right instead of Fabinho on the left and that is an improvement overall for the defense. The trouble is there isn't much data out there to back that answer up.  There is not much evidence that Williams is impacting the game more than Fabinho defensively. He is slightly more active going forward and less susceptible to bad turnovers (to the tune of 1 less turnover for every two games played), but other than that there is little evidence of better play.

I'm the first to admit that data doesn't describe everything, especially in the nascent landscape of soccer statistics. There can be a number of reasons why the combination of Williams and Gaddis at full back has led to better defensive performances. Unless of course you believe in very odd occurrences...

5. Brian Carroll plays more often when Gaddis is on the left

Brian Carroll has been the DCM paired with Gaddis on the left in 88% of those games (7 of 8). Yet he's only been paired with Gaddis when he is on the right in 33% of those 15 games. It's hard to imagine why such a defensive combination would be allowing less goals, if there is even a relationship here at all. The Carroll/Gaddis Right combination does not have a better goals against average than other pairings when Gaddis is on the right.

To summarize, the Union seem to perform better when Gaddis is placed on the left. All efforts to determine why exactly come up short. It appears Gaddis is a slightly less aggressive defender when placed on the left, which is understandable. The data from his full back partners indicates he may be better suited to play on the right. Could the difference be Brian Carroll?

The presence of Brian Carroll when Gaddis plays on the left might indicate an effort on the part of the coaches to protect Gaddis with a veteren presence. Perhaps there is a more conservative approach deployed in total when Gaddis is on the left. Whatever the case the move appears to work. Is it a long term solution? It definitely appears not. But will it be good enough as the Union make a push for the playoffs and the U.S. Open Cup?

What do you think the full back pairing should be as the Union make one last push for the playoffs?