Jim Curtin and his use of the Union "Puzzle Pieces"

After reading an article on the Philadelphia Union website by Doug Ammon, I started to think about his opinion and i decided to voice my own.

Share All sharing options for: Jim Curtin and his use of the Union "Puzzle Pieces"

Go back a week and a half, and everyone is excited about Carlos Valdes coming back. Jim Curtin has the players playing well to his "system" and everything is fantastic right?

Well, since the Valdes announcement, there have been some worrying signs for some Union faithful. One of this was in the form of this interesting article on the Philadelphia Union Website written by Doug Ammon.

The first thing to point out was his preferred Union lineup. 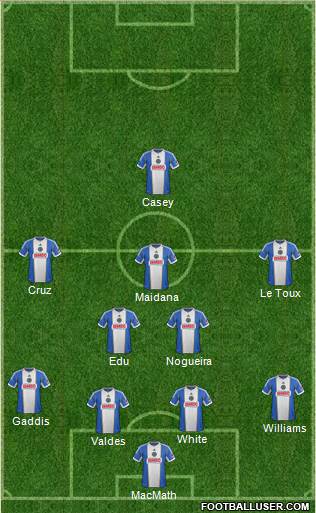 One of the first things I noticed was his use of Zac MacMath in goal. When the Union have just signed a goalkeeper finishing an impressive World Cup stint, I would find that a bit odd coming from a Union website writer. Apparently Raïs M'Bolhi has had "personal things to deal with" that kept him out of the past few weeks' games. MacMath played in the home game against the Montreal Impact as well as the US Open Cup Semifinal against FC Dallas before Andre Blake made his debut against the Houston Dynamo. In all three games, both goalkeepers played well. It makes me wonder if this is a hint that M'Bolhi may not even play this year, and that the signing is all for next year. If  the Union had to make the signing in summer, but M'bolhi won't play until next season, that is fine. However, it should be something that is stated and not "Zac MacMath is playing his last game as the number one keeper against Sporting Kansas City".

Then I noticed was that it is Valdes and Ethan White in central defense. This is something that Jim Curtin backed up on radio, saying that he wanted to play Valdes and White together as much as possible. In a way, this makes a lot of sense for Curtin to say. White has come in and played well enough to show that John Hackworth was probably wrong not playing him. I am a fan of giving White and Valdes time to get to know each other, and think that it could be a great partnership going forward. Ray Gaddis and Sheanon Williams are the two obvious players to round up the defense, and are rightly in Ammons' lineup.

The next thing I noticed was that like many coaches, Ammon had Sebastien Le Toux playing on the right wing instead of up front with Conor Casey. As we've seen before, when that happens Le Toux is not very effective, and Casey gets isolated. Let's hope that isn't inside information.

However, from there it leaves four spaces available in the team. In reality it was the first thing I noticed, but I wanted to leave this to last. His left midfielder in his lineup is Danny Cruz. Cruz has had a few good games, but often is invisible for much of his 60 minutes of game play. Another problem with starting Cruz is that he is an automatic sub out after 60 minutes because he runs himself into the ground so much (at times literally).

That leaves three spaces in midfield. You'll notice the absence of Maurice Edu, Vincent Nogueira, Brian Carroll, Amobi Okugo and Cristian Maidana from the lineup so far. That means two of these players have to miss out. 99.99% of those reading this would agree with me that Brian Carroll should be one of those players. For all his experience, he is easily the worst player in that list. The other guy that has miss out is going to be controversial however. Here's the conundrum:

1) Do you pick Maurice Edu to sit? Obviously not. He is a Designated Player = the highest paid player on the team in fact - and is probably the biggest signing in Union history.

2) Do you sit Vincent Nogueira? Obviously not. He was probably the star player of the first half of the season for the Union, up until he was injured.

3) Do you sit Cristian Maidana? Obviously not. He is leading the team in assists, and the team looks 100 times better when he is in the number 10 role of the team.

4) You have to sit Amobi Okugo. That's what Doug Ammon seems to want to do at least. This is something I've been worried that was going to happen since Curtin took over. Apparently, Okugo was dropped from an early US Open Cup game to "send a message". He has been substituted at times for tactical reasons, yet Michael Lahoud has stayed on. He was one of those not played in all three games this week, having been dropped (or rested) for the home game against Montreal (and not for tactical reasons as Carroll/Edu played the DM spots). All of this suggests that one of Hackworth's "Golden Boys" in Amobi Okugo may not be as well thought of by Curtin.

When a new manager takes over, there are often players jettisoned from the old manager's team. The new guy likes to make a change that he will be known for. In Hackworth's first games - Amobi Okugo was taken into the team out of the blue, and played in defense. He never missed a game there other than for suspension. Curtin is rightly doing the same thing, and Ethan White is "his guy". This means that Okugo has to go into that crowded midfield. Could Curtin be dropping and resting Okugo because he is a Hack guy? Who knows. However to get a midfield position is certainly far harder for Okugo at this time. This may change next season if Maurice Edu's loan isn't turned into a permanent transfer, and Brian Carroll leaves the club.

Another worrying point for Amobi came from a "Chalk Talk" presentation I went to a while back. In that occasion, and in plenty of interviews by Nick Sakiewicz, it's continually been said that the Union aren't going to go out and buy over the hill stars. They haven't so far and you could say that is a good thing. However, what they also said is that they want to build around their core of young stars. Those guys were mentioned as being Jack McInerney, Amobi Okugo, Sheanon Williams and Zac MacMath.

Since then Jack Mcinerney has been traded. Zac MacMath has seen Raïs M'Bolhi come in and was told that the team "doesn't hand the keys over to young goalkeepers". I think Zac is gone at the end of the season, possibly to expansion club Orlando City. We have seen signs that Amobi isn't thought of as highly any more, and with Ray Gaddis doing so well this year, it makes Sheanon Williams a very attractive trade piece. It seems that all the front office and managements claims about building around these stars may not have much honesty about them.

I hope I am wrong, but I have a bad feeling that Amobi may not be the Union captain for the next ten years like I wanted to see (well, at least until Amobi gets a move to his beloved Chelsea or Real Madrid).

While I don't agree with Ammon's lineup 100%, the good thing is that he points out that instead of players being played out of position like they were so badly under John Hackworth - Curtin is using the players he wants on the field, and then picking the formation/tactics around them. The only player out of position is Ray Gaddis, and that is because an out of position Gaddis is still a better option than Fabinho. I'd love to think that Curtin will continue to think this way, and change his tactics. To Jim Curtin - I propose these eleven players are the eleven players you want on the field :-

How do I fit these guys in? You could easily go four at the back, Okugo and Edu as defensive midfielders, Nogueira just in front of them with Le Toux and Maidana supporting Casey. However, I wonder if the following could be a formation that would work well for the Union? 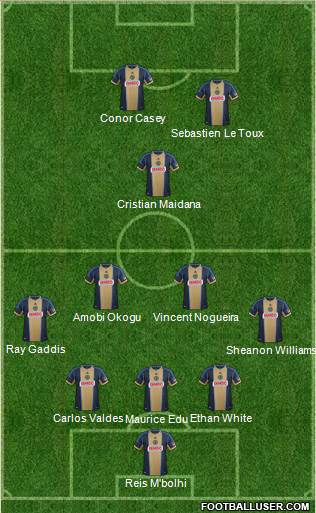 In my team, although Edu is out of position - he has done a good job there. It gives Williams and Gaddis freedom to get forward, and Okugo can sit back in the defensive midfielder job, with Nogueira not having to be too attacking. You can play the quick counter attacking play that Curtin likes - and the best 11 players are on the pitch.

Tell us what you think of the lineup suggestion, and what would you do with our crowded midfield?