Union 2-1 Impact: The changing role of the back four

The Union played their new game and the result was a second straight home win. The post-game analysis looks at how Curtin's counterattack design has changed the role of the Union back four.

Share All sharing options for: Union 2-1 Impact: The changing role of the back four

All questions about Jim Curtin's strategic intent for this team were answered in the game's first 12 minutes. With lowly Montreal limping into PPL Park there was a question as to whether or not the Union would seek to control possession. If there was any game the Union could manage to control it would be at home against the team with the league's worst point differential. But the Union embraced their counterattacking strategy from kick one, much like they did against Sporting Kansas City, and this time came away with the win.

The Union controlled the ball just 32% of the game. However, the game state is important context to put around any use of possession statistics. The Union did after all take the lead in the 12th minute of the match, which can change how both teams approach possession. But Curtin's intentions were clear even in those first 12 minutes. Montreal controlled the ball 75% of the game before Zac MacMath started the ultimate counterattack with a 75 yard long ball that dropped perfectly for Le Toux and resulted in the Union's first goal.

After the first goal, the Union continued to sit back but actually increased their presence on the ball to 35%. After Le Toux's second goal the Union sat back further and controlled possession 22% for the rest of the game. That was less than Curtin would like, no doubt, as the Impact took 55% of their 11 shots in the last 28 minutes.

The possession may have been better if the Union's passing was more stable. Their overall pass completion percentage tied a season low at 65% and was a low for home games. That performance was primarily driven by a poor performance from the backline, who completed just 60% of their passes. Normally defenders have the highest pass completion rating of all players and complete about 78% of their passes.

But this poor performance came somewhat from the design of Curtin's new strategy. Here are a few charts that lay out the change that's occurred since Curtin took the reigns. 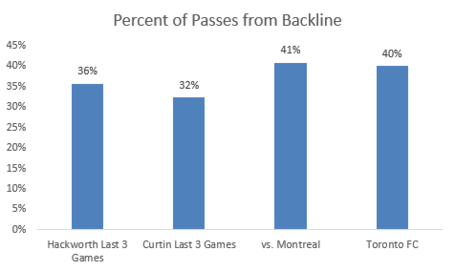 This chart simply points out that the percentage of passes coming from the back has not shifted significantly. Toronto FC statistics are included to provide a comparison to a team that has been successfully employing a counterattacking strategy all season. 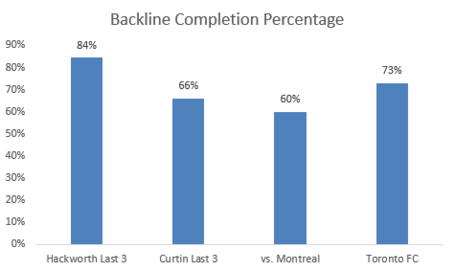 The last three Hackworth matches the back four completed 84% of their passes. During Curtin's last 3 matches they have completed just 66%. This is not due to deteriorating skills. This drop is due to the back four being asked to take more risks by pushing the ball up the pitch more quickly.

There is some evidence of this when looking at the percentage of passes attempted that are more than 25 yards. 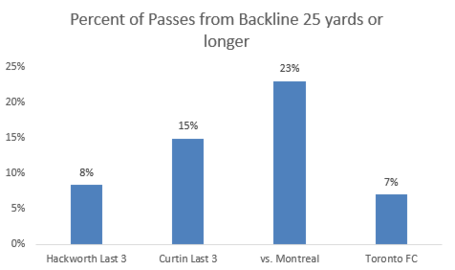 The Union backline are attempting longer passes. Comparing these results against the Toronto FC numbers it's evident Curtin is relying more on the back four to start the attack than may be needed. Toronto's back four doesn't attempt nearly as many long passes and their pass completion rate is higher which likely indicates they are taking less risk with their passing.

Analyzing a counterattack game under Hackworth also backs up the hypothesis. In the 2-1 road win at Sporting Kansas City earlier in the season the Union back four attempted passes of more then 25 yards just 7% of the time. That same number was 15% in the most recent Sporting Kansas City match under Curtin.

Given the Union had the lead against Montreal for most of the match, the 23% long pass rate seems excessive. Looking at the chart below, indicates this will be more the norm under Curtin. 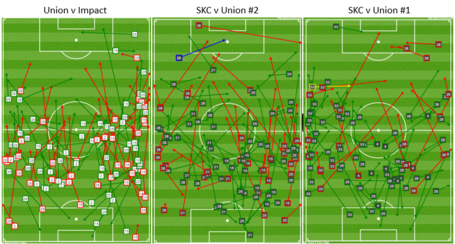 Pass charts can be daunting to look at, but focus the number of long red lines during the Curtin matches (the left and center charts) compared with the Sporting Kansas City game under Hackworth. Those are unsuccessful passes. All three games employed a counterattacking strategy but the roles of the back four are quite different. The game situations will drive some of the change, but in the case of the first game at SKC the Union also held a lead for most of the match.

Now focus on the verticality of the passing lines under Curtin compared to Hackworth. It's evident that defenders under Hackworth kept the ball wide with shorter attempts, while under Curtin, there is more direct down the middle approach.

The difference in approaches between Toronto FC and the Union could be who mans the midfield. It would make sense for the Toronto defenders to more conservatively link with Bradley and let him push the attack. Whereas linking with Carroll or Okugo/Edu may not be what Curtin thinks is the best option. The Union have attacking players that are solid at holding balls and distributing. Conor Casey, Sebastien Le Toux and even the smaller but crafty Vincent Nogueira are good targets up the pitch. That's how the 2nd goal against Montreal happened. After a quick throw from MacMath, Gaddis's first pass found Casey who quickly distributed it to a running Andrew Wenger who eventually set up Le Toux. That Gaddis to Casey pass is likely Curtin's formula for success.

The Union back four has been riddled with change all season long. There have been 9 players who have played defense this year with 6 different center backs. And Curtin has now changed their role to kickstart the offense. Fortunately, Carlos Valdes has arrived and it appears consistency is here for the final 12 games and the U.S. Open Semifinal. The back four will need to pass better for the Union to make a serious move this season, but don't be surprised to see them continue to push the ball far up the pitch when they get the chance.

Data for this article was culled from mlssoccer.com and whoscored.com.