The Union Should Counterattack More - And Here's Why

To possess or not to possess is the question for the Union this season. Here's a look at how the types of passes their making inform a style of play and which style has been most effective.

Share All sharing options for: The Union Should Counterattack More - And Here's Why

The Philadelphia Union are currently second in the league with 24 crosses attempted per game. Whoscored.com defines a cross as a pass from a wide position to a central attacking area. Crosses sounds like a good thing, but are they? The more times the offense is in the attacking third the better, right? In the case of the Union, the answer actually is not really.

Against the New England Revolution, the Union attempted just 16 crosses and won. That got me wondering about the value of being near the top of the league in crossing attempts. They also attempted 57 long passes (passes of more than 25 yards) which was their second highest total of the season. The Union rank second-to-last in the league with just 56 long passes per match.

Against FC Dallas, the Union attempted 26 crosses and 36 long passes and lost the match 2-1. What would such a relationship between the two types of passes mean? And were they telling us something about why the Union won and lost?

Here is my hypothesis about what the two pass types might indicate. Long passes are generally made by a team that have space in front of them and are looking to quickly expose that space. They would be more common for a team whose strategy it is to commit more players to the back and defend and then look to counterattack. Counterattacking teams tend to have less possession than teams that look to maintain possession more methodically. We can test this hypothesis then by looking at the relationship between long passes and possession. Sure enough, teams with a higher percentage of long passes have lower possession. The correlation between the two variables is -.55. That doesn't prove the hypothesis but shows it's not out of line either.

The other side of the hypothesis relates to crosses. Crosses are a poor man's pass in this theory. A team attempts to get a ball wide and then pass into the box when they can't find the space to penetrate the box with a higher percentage pass. This is not universally true, as teams like the New York Red Bulls are adept at crosses, but the argument here is more general. Crosses as a percent of total passes actually is negatively correlated with goals scored, which backs the theory, but it is relatively weak at -0.28.

What would it mean then when looking at the ratio of long passes to crosses? By this hypothesis, a higher ratio would indicate a successful counterattacking team that finds the space they are looking for in the box without having to go wide to find it.

Admittedly, this is an overly simple theory. Some teams may have a more direct style of play, willing to play longer balls up the field to quality holding players to make something happen with more space provided. They don't necessarily need to be counterattacking teams, just teams with a more direct approach to offense.

Moving on from what long balls and crosses might mean - does it matter for the Union? Apparently this ratio does matter. Here is a chart of each Union game that plots the long pass to cross ratio against possession. The orange dots indicate Union wins, the green dots indicate draws and the blue dots indicate losses. PPG means points per game earned in the table. 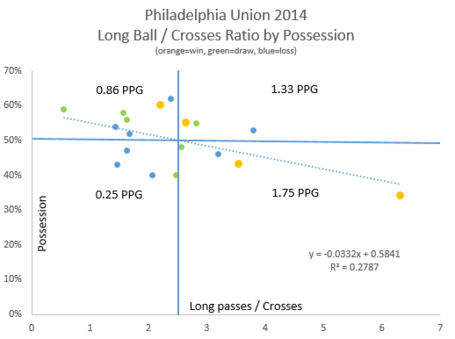 The fact that the long pass to cross ratio is negatively correlated to possession suggests that the ratio can be defined by games where the team was playing more defensively. That's positive for the hypothesis.

Take a look at the line that marks 2.5 long passes for every cross. There appears to be a successful break at that line. Just as a point of reference, the average MLS team attempts 3.3 long balls per cross. The Union rank last in the league in this metric. Above 2.5 long passes per cross, the Union are averaging 1.57 points per game across seven matches. In the eleven matches where Union's ratio was below 2.5, they are only averaging 0.64 points per match.

The importance of the ratio becomes more pronounced when looking at possession. Look at the four quadrants in the chart. When the Union possess the ball less than 50% of the time, the winning percentage is stronger above and below at the 2.5 ratio. The Union have gotten 1.75 points per game when possessing the ball less than 50% with the higher ratio. When they don't possess ball or have a high ratio they have mustered just one draw in four matches.

On the flip side, when the Union gain most of the possession, the ratio is less important, but still matters.

The Union have had a bit of an identity crisis this year. Over long stretches, they have shown the ability to possess the ball efficiently in the midfield. Other times however - especially on the road - they have abandoned possession and shown the ability to counterattack effectively. The road wins at New England and Sporting Kansas City are prime examples.

The data here suggests that they have been most successful when defending, playing more long balls up the field, and minimizing the number of crosses attempted. This isn't to suggest that the Union abandon all possession-based play. A manager must use game theory when making tactical decisions about possession. If a manager feels confident the team can control possession against another team, they likely should. Even in those cases, the Union would still benefit from a more direct approach to offense and rely less on slower building of play, as that has resulted in too many crosses.

One of the big questions out of this analysis is how much of these pass-type results are dictated by tactical decisions versus the reality of play on the field, and the impact of the opposition. Looking at pass attempts (as opposed to passes completed) gets us closer to a look at tactical design in my view. A manager will tell the team what approach to take to the game, and we can see that in what types of passes they attempt. But clearly game factors can still adjust these numbers.

Whatever the approach from a possession perspective, it appears the Union would improve their results by moving up from the bottom of the league in long passes and moving down the rankings in crosses.