FC Dallas 2-1 Union: Too many turnovers haunt the Union offense

The Union reverted to their old ways in Dallas but still could have earned a draw. In the end the Union offense was punchless and sloppy and couldn't overcome a defensive lapse and some bad luck.

Share All sharing options for: FC Dallas 2-1 Union: Too many turnovers haunt the Union offense

The Union reverted back to their old tendencies in a disappointing trip to Dallas. Defensive lapses and an inability to create quality shots eventually sunk the Union with a 2-1 loss. Despite the play, the Union could have easily escaped with a draw were it not for one very unlucky play. Without Sheanon Williams' unfortunate own goal we may have been willing to forgive the lackluster performance. Let's dig in and see where the Union went awry on Friday.

Too Many Turnovers - Stat of the Match

Conor Caseyand Sebastian Le Toux struggled to play soccer Friday night.  Whoscored tracks two bad play statistics. The first they call "dispossessed". They define dispossessed as when a defender tackles the offensive player and gets the ball away from them. The other metric is called "turnover" which is defined as a loss of possession due to a mistake. A mistake is not necessarily an incomplete pass which could be the result of a risky pass in the 18 yard box trying to make something happen. Such a pass wouldn't be considered a turnover. It's meant to be a play where incompetence plays a significant factor. To simplify I'm going to refer to the combination of those two statistics as "turnovers." Conor Casey and Sebastian Le Toux combined for 14 possessions where they turned the ball over. That was out of 88 touches. As a point of comparison, the forwards for Dallas had 91 touches and turned the ball over 5 times.

For more context the league leader in turnovers is Fabian Espindola of DC United. He averages 6.7 turnovers per game which is just under what the Union pair averaged on Friday. Espindola also averages 2.7 key passes per game and the Union forwards managed just one of those. The turnovers were there for Casey and Le Toux but the rest of the offensive play wasn't.

Let's just say it was a rough game for the forward pair.

The game funnel reveals that the Union's 11-10 shot advantage (and 4-2 advantage of shots on goal) was fool's gold. Six of the Union's shots were actually taken from farther than 28 yards out. Their effective shots, adjusted for shot location, was just 6.8 compared with Dallas' 10.8. Rather than outshooting FC Dallas by one, the Union really took 4 less shots than Dallas.

The Union managed just three shots inside the 18 yard box. That's a season low. They had taken just four shots inside the box on three other occasions. The Union were out possessed and were unable to effectively counterattack throughout the match. Not a great pairing. 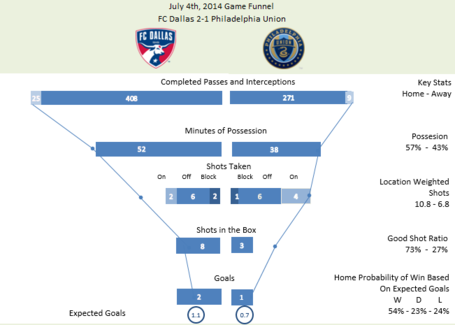 There are a lot of candidates this week. We have the aforementioned forward pair Le Toux and Casey for consideration. Maurice Edu's outing was also poor. His missed header attempt left him out of position on the Akindele goal and he did not hustle to get back. Williams had also partially committed to mark Perez on that play leaving no center backs in the picture when Akindele struck the ball home. Edu also had the red card that put the game out of reach. It was an ill-advised hustle play that came too late. But then there is also Andrew Wenger who was pretty abysmal in his 28 invisible minutes of action. Wenger turned the ball over twice in 13 touches (the same percentage as Le Toux and Casey) and completed just 5 of his 9 passes. In the end, there were too many players with sub-par performances. My vote this week goes to Maurice Edu but vote below for your Zero.

Cristian Maidanais becoming the Union's MVP midway through the season. Whether or not that is a good thing is up for debate. Maidana had another solid outing, registering 4 key passes including the assist on Okugo's goal. His passing was rather pedestrian with a 72% completion rate but he was the only dangerous player on the offensive end and the only hope to create a Union equalizer.

The long ball passing we witnessed against New England completely disappeared this week against FC Dallas. After attempting 57 long ball passes (2nd highest of the season) the Union attempted just 38 such passes against Dallas (2ndlowest of the season). They were also back to their league leading crosses level, attempting 26, led by Maidana's 14. The formula didn't work this week as the Union were unable to earn quality shots.

The change in passing types and results got me wondering if there was a broader connection between long ball passes, crosses and results for the Union. It turns out there is but the analysis is too long to publish in this post. Look out for part two of this week's analysis that looks into how these types of passes give us insight into the Union strategy, and what they should be doing going forward.