It started off with an email that had me thinking it was April 1st, and ended with a Q&A session with three Liverpool players. Monday July 28th is a day that Camden kids will never forget - here is why.

A few short months ago, I got an email asking if I could attend a Camden Youth Soccer Club (CYSC) board meeting. Assuming it was about our upcoming 3v3 Soccer tournament, I thought no problem. Then I saw the words :-

Liverpool Football Club want to come to coach our kids

At first i thought it was April 1st again. It wasn't however, and at the meeting we found out that the Liverpool Football Club foundation had heard about CYSC, and wanted to come out for the evening and coach the kids of Camden (not necessarily just CYSC). Obviously everyone at the meeting was delighted to hear this and agreed it was a great idea that we would support.

As I am sure you are all aware, Liverpool are currently playing in the International Champions Cup (or Guinness cup). They were in Boston, flew to Chicago and played a game (a win against Olympiacos). On Monday morning they flew to Newark, as they were staying in Princeton for a few days before they played Manchester City on Wednesday night at Yankee Stadium (a win on penalties). They flew out to Charlotte NC on Thursday morning and will play against AC Milan on Saturday night. If they qualify for the final (good chance since AC Milan are struggling so badly), they will then fly to Miami to play that game on Monday. If they don't they fly back to the UK on Saturday night.

Along all the stops on their tour the Liverpool Football Club foundation are shadowing the team. In that time, they have coaching sessions organized by the tour sponsors, as well as trips to hospitals to visit kids. Having played in Chicago and then playing in NY you might think why would Liverpool be close enough to care about Camden at all?  For some reason they were spending a few days in Princeton (would they do that just to be able to run the training session in Camden, or was it being close to Camden that allowed them to chose the club?) One of the LFC Foundation coaches is good friends with a friend of a volunteer coach at Camden. A few phone calls and suddenly it was all organized. If you get the chance check out the LFC Foundation, they are a great group of people doing fantastic things.

The details were ironed out, and we were able to start advertising. It was going to be three sessions of one hour each to take place on July 28th. The club started to advertise and space filled up fast with Camden kids wanting coaching that would be better than the volunteers (well at least me). Suddenly interest in the club was picking up. While in the past we have had Shea Salinas and Roger Torres of the Union to visit, with all respect that isn't as big a name as anyone to do with Liverpool. We received a lot of fantastic help organizing from the Camden School District, and there was even going to be a visit from Camden Mayor Dana Redd.

So the day of July 28th arrived, and having taken the day off of work I headed to Camden High playing fields. We got there early to set up and were soon met by something we rarely see - sports reporters interested in CYSC.  All it took was Liverpool visiting - some reporters seemed to think it was the first team there, but we will take that. Unfortunately, the Liverpool flight was delayed and then they underestimated the travel time from Princeton to Camden. It was 4.15, the mayor was ready, but no LFC Foundation. The show went on however, and I was asked to accept a proclamation from the mayor, and the key to Camden on the Foundation's behalf. Later in the day, Forbes Duff accepted the key and proclamation for the Foundation. 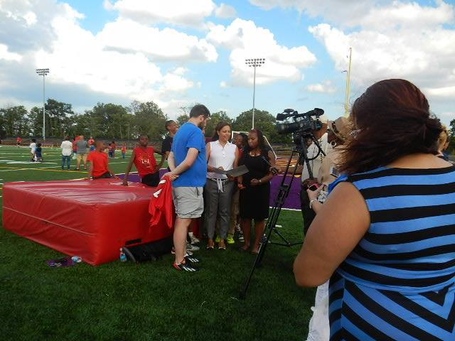 By this time the coaching sessions were under way. The kids were warmed up and split into two age groups; 4-9 and 10-14. The younger kids did some ball skills, shooting practice, and a fun game where they had to kick a ball and knock other balls off of the cones they were sitting on. 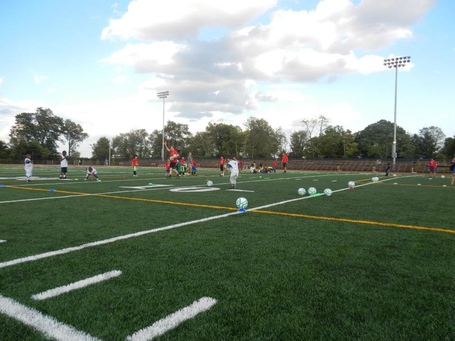 The older age group had more advanced drills, including lots of dribbling, and then went on to play small-sided games. The only high school team in the area, Woodrow Wilson, had some players at the event, and we all like to think that the Liverpool coaches were impressed with some of the skills on show. 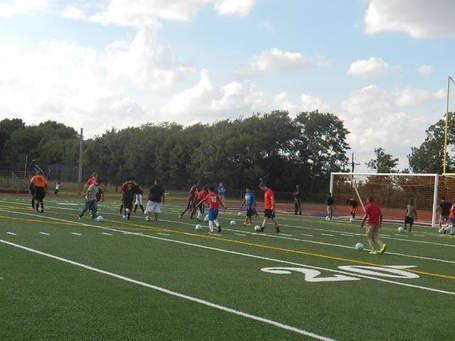 Once it was all finished, it wasn't the end of the day for 20 of the kids who attended. They boarded a school bus, and headed to Princeton for a Q&A session with the three of the players. Nobody knew who the players would be, although I'm sure everyone wanted club captain Steven Gerrard. The parents weren't allowed in the room for the event, and had to wait in the hotel lobby while the kids and coaches were taken in. On the way Steven Gerrard was giving an interview on live TV. Oh well, no Gerrard in the Q&A session. Who were the players? They were still famous enough for the kids to enjoy it. Brazilian Lucas Leiva, French International Mamadou Sakho and England Under 20 captain Conor Coady were there - and while he doesn't have the resume of his teammates, Coady's Scouse "cheekiness" was on show throughout. 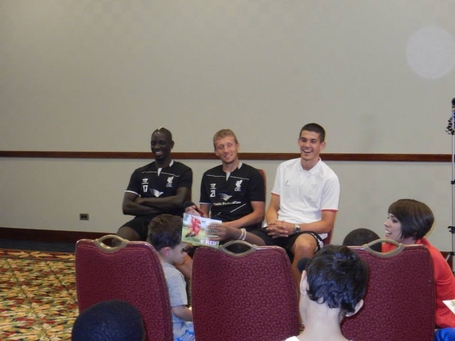 At first the children were allowed to ask questions - they included "Where are you from?", "Do you like soccer?", "What is your favorite sport other than soccer?" (tennis and boxing were the two answers given) and even "Do you like Shakira?" (we have some Colombian CYSC kids). However, the players made one little guys night when, after he had given his answer to questions they asked him to come and sit with them. 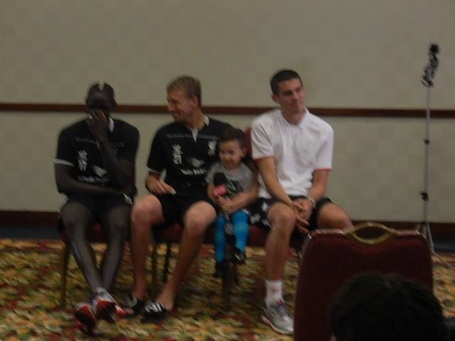 After the kids got their questions answered the LFC Foundation staff gave some loaded questions. Conor Coady was asked why he talks funny (well, I'm the coach that talks funny so the CYSC kids are used to that). Conor replied he thought he talked normally - Scousers, eh? Harshly, they wanted to ask Lucas Leiva what happened to Brazil against Germany. The answer of "I wasn't playing" was suggested, but Lucas just said yes - they were bad. Lastly, after finding out Mamadou has his hair cut in Paris, we were treated to what was called "the best dancer on the team".... well, at least he can play soccer. 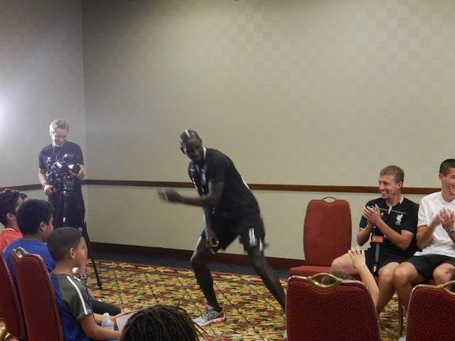 After the questions, the kids got a "team photo" along with the players and LFC Foundation coaches of the day. 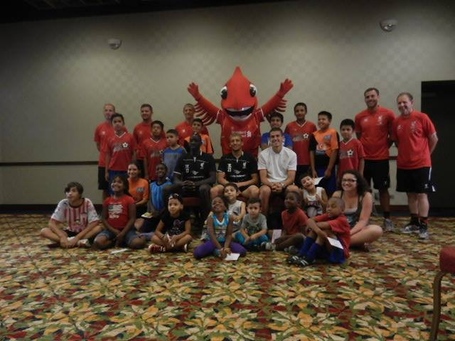 They also got autographs from the players, plus Liverpool mascot "Mighty Red" the liver bird. 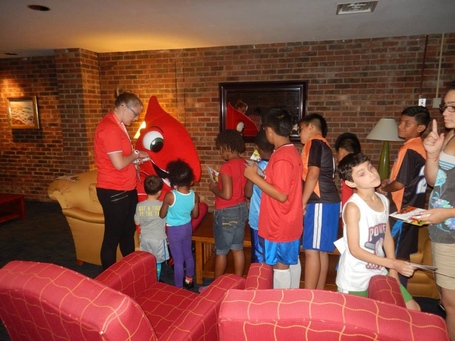 Lastly, while the players are always appreciative of the fans support, CYSC felt that they should thank them for allowing the visit. Therefore, during the day two CYSC shirts were signed by all participants, one was given to the players, and the other to the LFC Foundation coaches. I wonder how many players get to receive something from kids for a change? 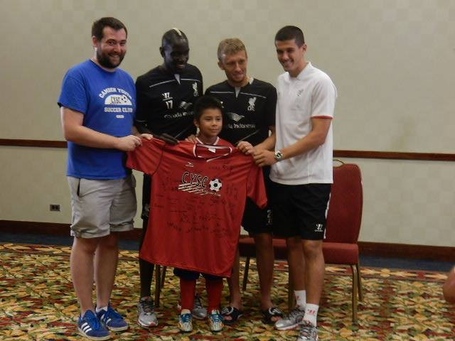 So that was it, the day was done, and time to meet the parents to tell them a story the children (and adults) will be telling for years to come. The parents must have lost out, you say? Well, remember earlier I mentioned a Steven Gerrard interview? After the interview, Gerard walked by our parents, and apparently stopped for a few moments to chat. Even the CYSC parents have their story to tell.

Walking out of the hotel, in the waiting area, we saw Ian Rush and Kenny Dalglish, two heroes of Liverpool (and Scotland in Dalglish's case). The one overriding thought I had was that CYSC was incredibly lucky to have experienced what they did on Monday morning. The LFC foundation and Liverpool did a lot for the club, be it the coaching and Q&A session, or just the advertisement we got out of the day. The mayor and schools superintendent are more aware of the club, and things are looking up. What a great day for CYSC.

So, having read this, I bet you are thinking "Wow, even mighty Liverpool are doing something for Camden, and I live right next door, what can I do?"  Well Camden Youth Soccer Club is always looking for volunteers, but if you don't have the time how about funding?  You could also start off by attending our 3v3 tournament for adults (maybe seeing if you can beat Diego and his dad if they play). Whether it's Camden or Kensington, go out and find out how you can help local urban kids live better lives by being able to play the greatest game in the world. 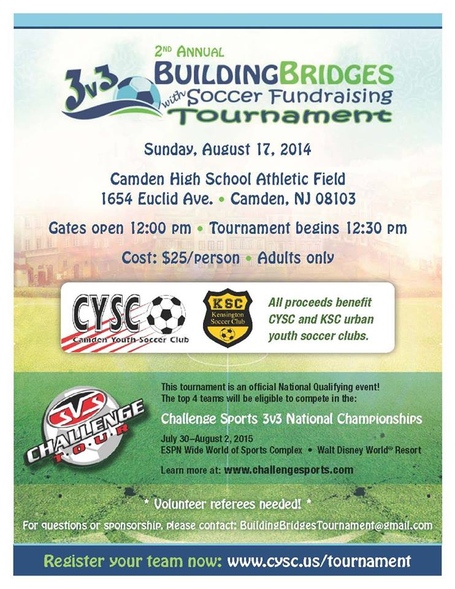