With reports of the Union signing Algerian goalkeeper Rais M'Bolhi, the goalkeeping situation is up in the air. Here's a look at how MacMath has been performing this year and how the front office might be viewing him.

Share All sharing options for: Is Zac MacMath Improving?

The Union are reportedly in the process of signing Algerian goalkeeper Rais M'Bolhi. He would come to the Union on the heels of Algeria's exciting World Cup run in Brazil, and it would appear raise the performance at that position. But the potential signing has the Union faithful scratching their heads about the Union front office priorities. With firmly entrenched starter Zac MacMath currently running the show, and 1st overall draft pick and Jamaican National Andre Blake waiting in the wings, it appears that Goalkeeper is close to last of the Union needs.

While Andre Blake's potential is still to be determined, Zac MacMath is building a body of work that can be broken down and analyzed. Looking at MacMath and his performance over the last two seasons will give us insight into what the front office is seeing and why they may be headed in a new direction.

At the highest level, the results do not look great for MacMath. The Union are conceding 1.67 goals per game in 2014, up significantly from the 1.29 GAA the Union posted in 2013. This is despite the fact that Union opponents are taking fewer shots per game - 12.7 in 2013 and 11.9 in 2014 (thru 19 games). When looking at shots on goal however, the results are even - 4.2 per game in 2013 and 4.2 per game in 2014. Last year Zac saved 69.2% of those shots on goal but this year his save percentage is down to 58.8% (data only through the first 19 games). Despite the same number of shots being put on target by opponents the Union have conceded 29% more goals per game, and Zac's lower save percentage accounts for the full deterioration.

But we all know that the goalie is not totally responsible for goals or shots allowed, because all shots are not created equal. SB Nation updates regularly a selection of shot statistics we can use to further assess MacMath's performance.

Here is a look at the distribution of shots on goal by location and the save percentages: 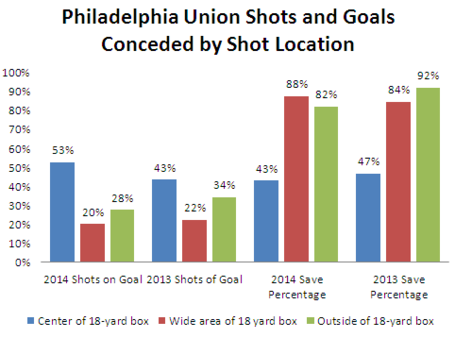 Looking at the chart a few things jump out. First is that the Union are allowing 10% more of their shots on goal from the center area of the 18-yard box. That's not going to help Zac. But it's also clear that MacMath is saving less of those shots. His save rate has dropped from 47% last year to 43% this year on those shots. Working out the math, about half the Union's goals against increase is due to the shot location and about half is due to MacMath's worsening save percentage.

But we still can't blame MacMath or at least suggest he is deteriorating quite yet. One of the big issues of looking at just save percentage, even adjusted by location, is that we don't know how many defenders are between each shot. A shot on target from the top of the box with 6 defenders in the way is very different than that same shot with just 1 defender in the way. Against fewer defenders, a shooter has many more angles at his disposal and guessing which angle the shooter would take would make it tough for a goalie to effectively position himself.

There are two metrics we can look at as a proxy for "defensive density". The first is shots allowed per game. The more shots allowed in a game the more defenders are likely to be between the shooter and the goal. Shots allowed have dropped as we mentioned (12.7 to 11.9), which would indicate less defensive density, but it's not a lot. The other metric is blocked shots. The Union are indeed blocking fewer shots (thanks DoopCast!) this year. Last year they blocked 25.1% of shots and this year that number is down to 22.7%.

Is that decline in blocked shots enough to describe the MacMath's save percentage decline? It's hard to tell but it doesn't seem like it's entirely responsible for the issue. Fans have seen breakdowns all year from the defense that have left MacMath in terrible positions. So statistics don't tell the whole story.

The other major aspect of MacMath's game to analyze is whether or not his play in the box is reducing the number of shots taken by opponents. This is a very difficult aspect to analyze, because so many players are involved in stopping an opposing offense.  Again, there are two metrics that can help here. The first is the percent of shots that come from crosses. A lower number would indicate that a goalie is cutting off more of these passes and therefore limiting shots. MacMath is doing well in this area. Last year the opponents took 41.2% of their shots from crosses. This year that number is down to 31.5%. This indicates he might be limiting the oppositions' chances by cutting off more crosses.

American Soccer Analysis tracks the percentage of shots on goal that result in a rebound and a quick follow up shot. MacMath has the 2nd highest level in the league for any goalie that has played more than a handful of games. He allows 9.5% of the shots that come his way to result in a 2nd chance. This is contributing to allowing actually more quality shots by the opponent.

Putting it all together, MacMath is not having a banner year. No goalie with a 1.67 GAA could say they are. But it appears most of the regression from last year can be attributed to the declining play of the defense (fewer blocked shots and more shots allowed closer to the goal). That said, it's disappointing that MacMath isn't improving on his statistics even when adjusting for shot location. Perhaps the Union front office is eyeing this progress and feels his upside is limited. Perhaps they feel his value is strong in the league and it's time to make a change by bringing in M'Bolhi.

Even assuming that M'Bolhi becomes a member of the Union and that Zac MacMath is moving on, questions still remain. What is to be made of the future of Andrew Blake? And given the limited resources that MLS teams operate under, was upgrading the goalkeeper one of the key priorities?

Only time will tell. What do you think of the current goalie situation given what you've seen of MacMath and Blake?