Ten reasons the Union offense is the hottest in MLS

Through the Union’s first 11 matches they scored less than 1 goal per game. And over the course of their last ten they are scoring more than the Seattle Sounders. What happened? Here are 10 reasons the Union have become one of the hottest offenses in the league.

Share All sharing options for: Ten reasons the Union offense is the hottest in MLS

I'm sure if you think back hard enough you'll remember how bad the Union offense was this season. It was so bad writers were counting the minutes between goals. During one stretch the Union took 55 straight shots without scoring. It was bleak.

And then everything changed. The Union have averaged 2.3 goals per game over their last ten. That's a higher clip than any team in the league has managed, even the mighty Seattle Sounders.

The Union have had three distinct phases this season, and analyzing each of them will help highlight what's changed. The first phase is the first 11 games of the season. Only twice during that stretch did the Union even score 2 goals. The second phase was the last five games of Hackworth's tenure, starting with the 2-1 road win at Sporting Kansas City. That game was the start of the Union turnaround.

The third phase is the Jim Curtin era, where the offense continued to excel, but for different reasons. To understand what changed, here is a look at completed passes by the Union and their opponents across the three phases. 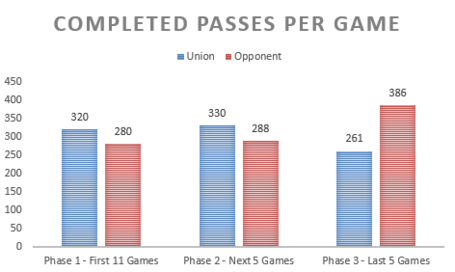 The Hackworth era was clearly very different from the Curtin era. Under Hackworth the Union consistently possessed the ball more than their opponent. During Hackworth's last five games the games were played at a faster pace as the passes on both sides increased slightly. But under the Curtin the Union are passing much less frequently and allowing their opponents to pass much more frequently.

The completed passes shift has impacted the Union's shots taken. 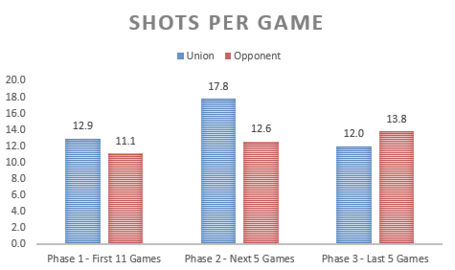 It might seem disturbing that the Union have conceded the shots attempted battle under Curtin, especially after the Union were improving their shots taken as the season was progressing under Hackworth. But the Union are still creating more shots per minute of possession than their opponents, and more than they were during the first 11 games of the year. 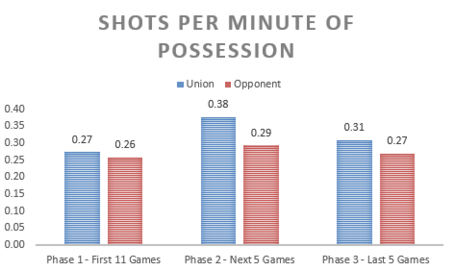 Reason #1: The Union are creating more shots with their possession - 31% more than their first 11 games to be exact

Sometimes it's just a question of volume. The Union are more efficient with the ball and that is creating more opportunities for shots. The shots they are taking now appear to be taken with more space and closer to the goal. Here is what they are doing with those shots. 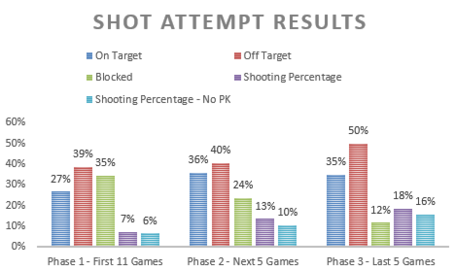 First take a look at the percentage of shots taken that are blocked across the 3 phases. During the first 11 games the Union had 35% of their shots blocked. In 2013 the MLS average was 23%. During Hackworth's last five games the Union had fewer shots blocked. And under Curtin the Union are well below average at 12%. Blocked shots serve as a proxy for how many defenders are between shooters and the goal. The decline for the Union would indicate they are taking shots with less defenders in the way, which leads us to the 2nd reason.

Reason #2: The Union are shooting with more space and their opponents are blocking fewer shots

The dark blue bars on the left of the above chart indicate the rate at which the Union shooters are putting shots on frame. The Union are putting 31% more of their shots on target in the 2nd half of the season. Part of that can be attributed to shooting with more open space. The rest perhaps can be the tactics which will be broken down later.

Reason #3: The Union are putting 31% more of their shots on target

The Union have been more efficient creating shots in space and also putting shots on frame, but the biggest impact is they have found a way to get more shots past the goalie. The Union had a shooting percentage of just 7% over their first 11 games. They've more than doubled that percentage since then to 15.4%.

Reason #4: The Union are shooting a higher percentage of their shots past the goalie

However, the shooting percentage is inflated somewhat by an increase in penalty kicks. The Union have taken and made 5 penalty kicks in the last ten games compared with just 1 in their first 11 games.

Reason #5: The Union have taken 4 more penalty kicks in the last 10 games

The penalty kicks account for nearly 1/3 of the increase in the shooting percentage. Even still the Union have improved their shooting percentage. Some of that is due to the counter attacking strategy employed by Jim Curtin, but this increase was already happening under Hackworth, leveraging his strategy. The bottom line is the Union are shooting up to their potential.

Another reason for the improved shooting percentages is where the Union are taking their shots from. Here is a chart of the distribution of their shots across the low and high scoring periods. 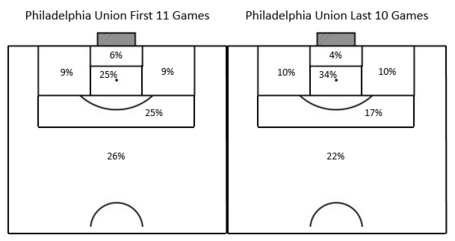 During the first 11 games the Union took 51% of their shots from outside the 18 yard box. In the last 10 games they've taken just 39% of their shots from outside the box. Shots are generally 5x more likely to go in when they are taking inside the 18 yard box compared with outside. They've managed to move those outside shots into the zone in front of the goal and just beyond the 6 yard box.

Reason #6: The Union are taking shots (much) closer to the goal

Time to shift gears from passing and shooting trends to the tactics that are driving them. Here are the average field positions for all starters. There is one chart for each phase that highlights what a typical formation was at that time of year. 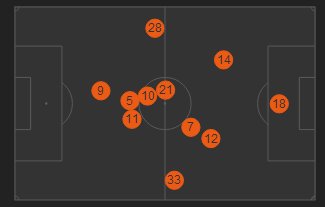 Notice the 9 position (in this case Jack MacInerney) is spread far from the rest of the offensive players, set up as a target forward. Also notice the bunching of the attacking midfield players. This indicates that the wings were switching sides enough so that their average position was in the middle of the field. This was a Hackworth tactic that you will see changed over time. Also notice how high up Nogueira is (the 2nd highest position) and how deep Maidana is playing relative to the wings. 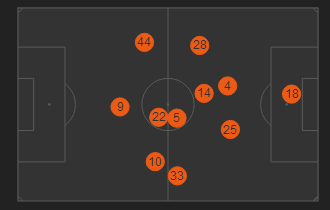 The nine position, now Andrew Wenger, is still central and spread out from the rest of the midfielders. But the wings are now staying on their sides consistently. Nogueira is now the 4th highest player on the pitch and playing mostly in the defensive half of the field. Also notice there is no Le Toux in the starting lineup. 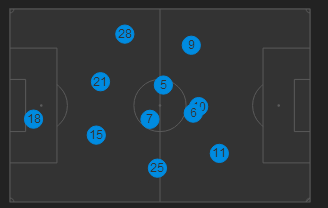 Conor Casey has now consistently entered the scene as more of a false 9, holding up the ball for the wings. Le Toux is consistently in the picture with Jim Curtin at the helm and playing consistently as the highest player and on the right side, which is his best spot. Also notice Maidana is now more central and higher than the striker rather than out on the left or crossing back and forth under Hackworth. Nogueira is the 5th highest player and playing roughly in the middle of the field.

Here is how all of these observations have manifested themselves in more goals for the Union.

Reason #7: Vincent Nogueira is playing deeper relative to his teammates

Vincent Nogueira is more effective when playing deeper and linking with attacking midfielders rather than trying to link with strikers. A case in point is that Nogueira's key passes (passes that lead to a shot) numbers are not that impressive. During phase 1 Noguiera averaged 1.1 key passes per game when his average position on the pitch was 3.3 (meaning he averaged being slightly more than the third highest player on the field). To put those numbers in perspective that is about how many key passes per game have been coming from Union defensive midfielders this season.

Nogueira increased his playmaking to 1.6 key passes per game during phase 2 despite his average position dropping deeper to 4.2. In phase 3 Nogueira has only played two games due to the groin injury. In the Chicago match Nogueira was placed higher up the pitch to compensate for Maidana's absence and he failed to register a key pass. Against the Red Bulls where he was the 5th highest player in the chart above, he had 2 key passes. The trend continues.

Here is a chart of Union goals scored relative to where Nogueira plays. 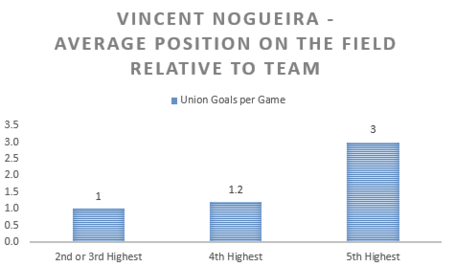 Reason #8: Le Toux is back and forward and playing on the right

It's been noted by many fans, but it's worth saying again. It's good to have Le Toux playing forward again. The Union score more when he is the highest player on the field and playing on the right side. 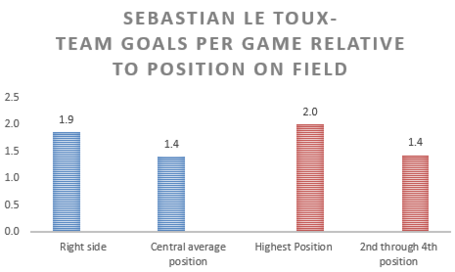 If you cross the 4 games where Le Toux was both the highest player and on the right side the Union averaged 2.3 goals per game. When on the wing and asked to cross fields Le Toux was falling out of favor. But this renewed focus has been a huge boon for the Union scoring leader.

Reason #9: Maidana is playing more and setting up more shots

Maidana's game is setting up the other midfielders or forwards. He leads the team in key passes by a wide margin. This may be a surprise, but Maidana has been very consistent in his ability all season. The difference is not in how many key passes he makes per 90  minutes, but that he is consistently playing more minutes and becoming a bigger part of the offense. 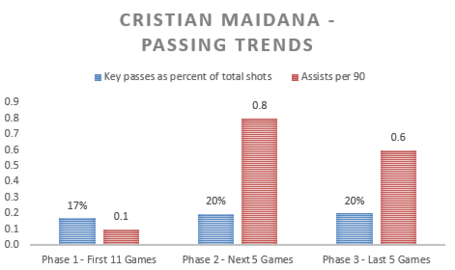 Maidana sets up 1 of every 5 Union shots. From the first 11 games Maidana averaged 64 minutes per game but since has averaged 82 minutes. That has allowed him to help create a higher percentage of the team's shots and his assists have dramatically increased as well.

Reason #10: Conor Casey has rounded into form and the team performs best with a holding forward

Whether or not it's the improved play of Conor Casey or that the offense is best suited to a forward who plays deeper is hard to tell. The results indicate one of the two factors or a combination of both are making a difference. 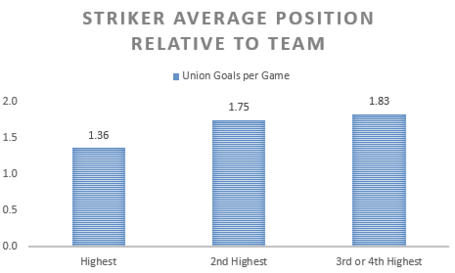 When rolling it all up there a number of factors contributing to the Union's amazing turnaround. Much of it seems to come from players coming into form and managers finding where they're most productive on the pitch. Nogueira, Le Toux, Maidana and Casey have all come improved their play by finding their comfort zones. Couple the efficiency that those changes have yielded with a new counterattacking style that gives the Union shooters more space, and all of a sudden there is a Union offense that is fun to watch. The big question is will the Union continue this hot streak or was this a peak performance? There is nothing about these trends that indicate anything out of the ordinary is happening, or that fans should be wary of a fall from grace.

All data for this article is from mlssoccer.com and whoscored.com.