Every week we "Monday Morning Manage" every game with our fellow Union faithful. What could have been done better? What were the missed opportunities? Did that sub really need to happen? We bring all the talking points to you each week right here.

Share All sharing options for: Monday Morning Game Changers Analyzes The Fireworks Occurring On The Pitch

There were people who bought tickets to yesterdays game, and sat in front of me during the game. They left just before the final whistle. I wonder if they realized they had purchased tickets to fireworks tonight. Or perhaps they had seen enough fireworks on the pitch. That was an interesting 90 minutes of action, and we have plenty to discuss in this week's game-changers article.

1. Ethan White starting in place of the suspended Maurice Edu.

It's been a very consistent, settled lineup under Jim Curtin so far, but that had to change this week because of Maurice Edu's suspension. Instead of moving Amobi Okugo back to central defense, Curtin gave Ethan White his first MLS minutes as a Union player. And White didn't let Curtin down. White had a solid game and played physical despite not being the tallest player. He was also quick enough to recover when things went against the Union, nearly getting a last ditch block on the third Rapids goal. The big question that White's performance brings up, however, is why hasn't he played before? The Union have had two converted midfielders in central defense and the disastrous "Wheeler experiment" all playing in central defense ahead of White prior to Saturday night's game. Surely White should have played prior to this.

The other benefit the Union had from this decision was allowing Okugo to stay in midfield, his most natural position. His passing ability allows him to create from the position. It was his fantastic run that created the third Union goal for Andrew Wenger's boot studs to bundle home. If Amobi is allowed to continue to play in the midfield he's going to turn into a special player who may one day see a call-up from Jurgen Klinsmann. Let's hope he realizes his fullest potential with the Union for the near future.

2. Danny Cruz nearly having his leg broken in a tackle - and it's only a yellow card.

Last week I mentioned that Maurice Edu deserved his red card. This week, if anyone thinks that Shane O'Neill didn't deserve a red card they must have been thinking about where to watch the post-game fireworks. Unfortunately for the Union, referee Sorin Stoica must have been doing that at the moment of the tackle. Lets have a look at this still, expertly taken by Matt Reppert. 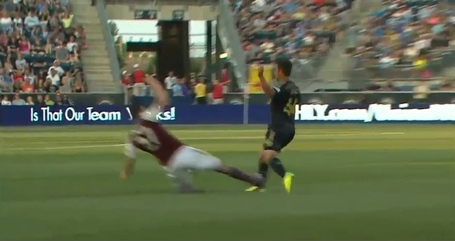 First , note that you don't see the ball anywhere near where O'Neill is tackling, so obviously it was quite late. Secondly, look how far off the ground that O'Neill's foot is. Thirdly, check out the position of his foot - i.e. studs up. Looking at the image, it was an awful tackle.

Now have a look at the video.

Check out the speed that both players are moving at. Cruz manages to easily get the ball and O'Neill is absolutely flying in with an out of control tackle. If you manage to get to the last replay from behind the goal, you see the bend in Cruz's leg/ankle. It really was a leg-breaking tackle and Cruz was lucky not to be out for a year, and O'Neill was lucky to stay on the field.

I am willing to bet that the referee didn't give the red card because of the wrong belief that you can't send someone off early in the game. This was a tackle that deserved a red card even two seconds into the game, and it's a disgrace that it was only yellow.

Of course, talking about game-changing moments, maybe this is one that went the Union's way, with their well-known inability to do well when they have a man advantage. The rest of the game was looking good for the Union until the 76th minute Then......

3. Michael Lahoud gets sent off and gives away a penalty kick.

There will be more on this later in the week from our TBG panel, but here's my comment on it. Michael Lahoud tried an overhead kick, and while he managed to clear the ball, he also managed to kick Colorado's Jared Watts in the face. The kick wasn't enough to hurt Watts, but it was enough for the referee to bring out the red card, sending Lahoud off for the kick.

For me, it was the wrong decision. It's a play that happens all over the pitch, with the outcome usually an indirect free kick and no card. Watts head was lowered, and while there was contact, Lahoud didn't go out to deliberately kick Watts in the face. If the ref had given a yellow card, then it would be a more acceptable decision, but that wasn't what happened, though a yellow would have sent Lahoud off anyway as he had already picked up a yellow in the first half.

As for the decision to give a penalty, I disagree as I believe it should have been an indirect free kick. According to Law 12:

"An indirect free kick is also awarded to the opposing team if, in the opinion of the referee, a player:

By all the rules I could find it should have just been an indirect free kick. Regardless of what Stoica should have done, this was a game changing moment, and it may have directly cost the Union two points.

4. Making the wrong decisions defensively.
One thing we can't blame the referee for is the decision that Michael Lahoud did by trying the overhead kick. Last week, Fabinho tried an ill-advised clearance that led to the own-goal. This week, Lahoud had his panicky moment trying the overhead kick, which even if Watts is not there, is far too risky a chance to take in your own box.
There was another very poor clearance by Fabinho, and then later in the game Fabinho cleared the ball out of Zac MacMath's hands for a corner when Zac was shouting for him to leave it. On the Rapids' third goal, Sheanon Williams tried a risky interception instead of playing safe defense, and Deshorn Brown was in through on goal for the equalzing strike. While Sheanon's mistake, like Edu's last week, was likely due to playing in an unnatural position, it's typical of the defensive lapses that continue to haunt the Union. Hopefully if Berry, White, and even a returning Carlos Valdes are the centre-back pairings from now on, there will be a lot less of this.
5. The idea that the substitutions made after the red card were wrong.
I've seen a lot of suggestions about the substitutions costing the Union. Fans seem to hate the fact that Brian Carroll and Aaron Wheeler got to see the field. Let's go through the substitutions and see which are agreeable and which are not agreeable.
A) Andrew Wenger for Danny Cruz.

Danny Cruz had another good game. He was all over the place, should have got O'Neill sent off, and had a great effort saved by Clint Irwin (one of two the Colorado keeper had). However, as always, Danny Cruz isn't a 90-minute player. You put him out there, let him run a lot, and then take him off after 60 minutes. Looking at the bench, Wenger is the obvious replacement. This was a perfectly acceptable sub to make, and Wenger validated Curtin's decision with a goal.
B) Brian Carroll for Conor Casey.
This is one where most people were upset. However, like Cruz, Casey isn't a 90-minute player. The sub came just after the Lahoud red card, and was needed to keep the shape of the team. When going down a man, it is necessary to make changes to compensate the loss. This sub  would not have happened if Lahoud didn't get sent off. Curtin needed to make a change to get the shape of the team back to four defenders with two defensive midfielders, and the rest attacking. It was the correct change to make as nobody else could fill that position in center midfield.
C) Aaron Wheeler for Cristian Maidana.
This was the strange one for me.  In a game where the Union had the lead, bringing off a player that can hold the ball in midfield and create chances (Maidana) for a player that will just challenge for the ball (Wheeler) isn't a clever thing. If Maidana is coming off, Curtin needs to bring on Vincent Nogueira or even Austin Berry to shore up the defense.

The fact that Nogueira didn't come on suggests one of two things. 1) Nogueira wasn't fit enough to play any minutes at all. If that was the case, then why was he even on the bench? Surely a player such as Zach Pfeffer should have been there, and would have been a better choice to bring on than Wheeler. Or 2). Nogueira isn't thought of as a player of high enough quality by Curtin to bring into the team. That's a disturbing thought.
So, those are my picks for the moments that changed the course and outcome of the game. Do you disagree with my assessment of the substitutions? Vote in the poll and let me know! Was there anything I missed? Continue the discussion in the comments section!

The Whole Story: Matchday 19 The Colorado Rapids Make A Quick Stop In Philadelphia