Revolution 1-3 Union: The Union went from wide to long to get the road win

A new formation. A new lineup. A new commitment to defense and counterattacking. How the Union went from wide to long and stole a win.

Share All sharing options for: Revolution 1-3 Union: The Union went from wide to long to get the road win

The Union jump started the 2nd half of their season with a comfortable 3-1 road win over their New England rival. Sebastian Le Toux continued his recent resurgence with a brace and Danny Cruz sent home the third goal with an impressive strike. Jim Curtin won his first MLS game with a new formation, a new lineup and a solid defensive performance. But there were a few more wrinkles in the new look Union that helped them surprise the home crowd.

From Wide to Long - Stat of the Match

The Union attempted 57 long ball passes (passes more than 25 yards long) and 16 crosses. The reason those stats are interesting is because the Union's season long ratio of long passes to crosses was 2.0 going into the match. The 3.6 ratio against New England represents two things.

1) The 57 long passes was the second highest total of the season. The Union were trying to get the ball quickly up the pitch on counters rather than using shorter passes to maintain possession as they pushed forward.

2) Prior to this match, the Union were tops in the league in crosses, averaging 25 per match. The 40% drop against the Revolution represents a steep decline from the average and shows the Union were not as concerned with getting the ball wide but rather finding the space wherever it materialized. As you'll see in the Big Picture below, the Union were working far more interchangeably up front than they've been in the past.

The game funnel this week is the opposite of what we're used to seeing. Usually the Union control possession only to lose the battle of shots, quality shots or goals. This time they lost all of those battles except the one that matters, goals. They only took twelve shots but they were taken with more space than usual and they converted three. From an expected goals perspective the Union should have lost 2.0 to 0.8. When that kind of a difference happens on the road the away team only wins 15% of the time. It's good to be on that side of the odds. 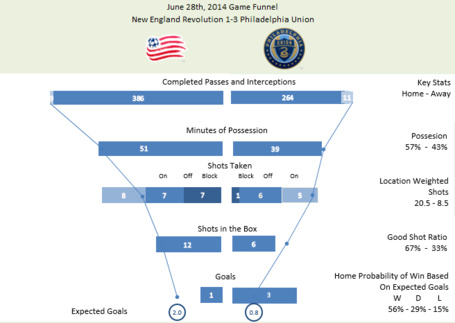 Ray Gaddis didn't have his best game. The Revolution attacked 50% more often down the right side of the pitch (Fabinho's side) than the left side (Gaddis' side) yet the Revolution took 50% more shots from Gaddis' side. Further he completed just 68% of his passes--quite low for a defender. He completed just 1 of 7 long balls and missed on both crossing attempts. There have definitely been better games for Ray.

The eye test was good enough this week. Sebastian Le Toux's opportunistic play on a Revolution mistake gave the Union a surprising 1-0 advantage going into half time. And then just when it looked as though New England might equalize, he iced the game with a cool shot in the lower left corner of the goal. Otherwise Le Toux didn't register much in the game, but he was constantly putting pressure on the Revolution's defense, finding space and creating for others. It's good to see Le Toux back and contributing where he's most comfortable, up top.

Jim Curtin changed formations, abandoning the 4-3-3 and moving to a 4-2-3-1. But he also sat the team back and played the top 4 players interchangeably. Below are charts of the average starting player positions for the last two matches from Whoscored.com.

Here are my observations:

It will be interesting to see if the changes evident in this one match will continue under Curtin. Are the days of the cross happy Union gone? Is this going to be more of a direct attacking team? How deep will the defense play as the team gets comfortable with their new positions?

For once this season the fans can look forward to how they'll play the next match, instead of watching the horror show on repeat.
Let us know what you think of the new look Union in the poll below.