The Union have reversed fortune and now have 9 goals in their last 4 games. But are the goals coming from Hackworth's preferred style?

Share All sharing options for: Chivas USA 0-3 Union: Stat Hero of the Match

The Union had transitioned from frustrating to embarrassing as the season continued to reach new lows - and then along came Chivas. In the last match, the Union appeared to play the blueprint game for Hackworth’s system, dominating possession on the road even while holding the lead. The Union completed 497 passes, by far their most this season. The second highest game was game 2 against Houston when they completed 403 passes in the 1-0 win. The fact that the Union did so while leading most of the game is even more impressive. Their pass completion rate was 87%, also a season high. The game was a passing clinic and this time the goals came along with the linking. But were the goals a result of what has been criticized as a possession strategy that is too methodical?

The game funnel below reveals how dominating the performance was for the Union. They outshot Chivas USA 14-6 and allowed just 3 shots in the box and 1 shot on goal. 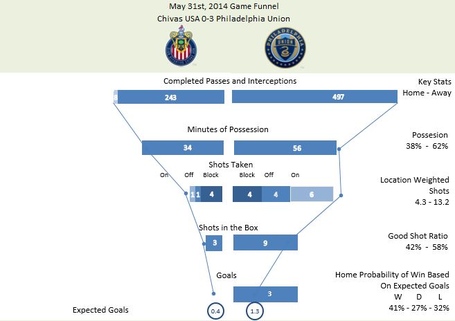 Stat of the Match –

The Union had two players with more than 100 touches each. Both Edu and Nogueira touched the ball 105 times and 104 times, respectively. It was the first time any Union player collected 100 touches in a game and only the second time any player had 100 touches in a Union game. Matt Besler had 115 touches in the Sporting KC match. Nogueira completed 91% of his 90 passes and Edu 89% of his 85. They also combined to complete 15 of 18 long passes of more than 20 yards. It was an impressive display from the central midfield pair.

Stat Zero of the Match –

The exceptional possession display by the Union does not suit Danny Cruz’ style of play. Cruz was the forgotten player in the match. Compare his statistics with his wing partner Maidana. Maidana collected 90 touches to Cruz’ 47. Maidana made 66 passes to Cruz’ 25. Maidana made 4 key passes while Cruz was unable to connect such a pass. Whether the team was intentionally looking to Maidana’s side or Cruz was just less effective, the bottom line is Cruz didn’t make an impact on the match. He also only recorded 1 defensive statistic with a single tackle.

The hero is a tough call this week - Maidana and the goal and beautiful assist or the two goals from Conor Casey? Whoscored rated Maidana’s game an astounding 8.87 and Casey’s an excellent 8.38. The defensive statistics were even close. Casey had two defensive headers off corners, an interception and 2 clearances. Maidana had two tackles and an interception. I’m going to pick Maidana this week. While Casey's PK was solid, it was not earned by a play he made.

The goal scoring drought that plagued the team earlier appears in the past with the team scoring 9 goals in the last 4 games. But there is still concern over the Union’s ability to score from the methodical buildups that have become their calling card. The Union scored from a questionable handball, a counterattack and a breakaway goal. The Union offense appears at its best when attacking quickly from the middle of the field and getting the ball at the feet of Maidana. There is still little evidence they can score while eating up possession.  Here's a breakdown of the six goals in the last four games that did not result from a penalty kick.

1. Against KC - Maidana's run from a throw in deflects off the keeper and the rebound goal is scored on the hustle play by Cruz.

2. Against KC - A great hold of the ball in the box from Wenger whose pass was deflected perfectly to Maidana who calmly finished.

3. Against NE - Nogueira's blast after a pass from a Williams throw-in (which effectively works like a free kick).

4. Against NE - A long ball to the top of the box by Le Toux and a nice header from Berry lands the ball to the feet of Williams who finishes easily.

5. Against Chivas - Edu's pressure forces a turnover picked up by Williams. Edu gets the ball back and finds Maidana headed down the left side with plenty of space. He struggles to control the ball but somehow lands a perfect cross onto the head of Conor Casey.

6. Against Chivas - Fred is at midfield and sends a ball to a running Nogueira who finds Maidana wide open again on the left. This time Maidana takes it himself and scores.

Of the non-penalty kick goals the only one that was scored from a prototypical 4-3-3 mold was the Wenger goal. Four of the others were quick strikes coming from the top of the attacking third, usually taking advantage of Maidana's flair in the open field. These quick strike opportunities were not be executed in the earlier part of the season when the Union struggled to score.

This is not to criticize the goal scoring of the Union which has been pretty of late. The question is whether or not the 4-3-3 is to be given credit for the goal scoring or is there another reason for their recent success.  And should the Union be playing more of a deliberate counterattacking style to take advantage of Maidana's ability in the open field?

What are your thoughts? Please feel free to comment below and let us know.

The Whole Story: Matchday 15 California Dreamin' Of A Win Against Chivas USA