USA 2-2 Portugal: Inside the numbers of the emotional roller coaster

The United States team gets their hero and zero award of the match and we break down how the team is navigating the group of death so far.

Share All sharing options for: USA 2-2 Portugal: Inside the numbers of the emotional roller coaster

The United States Men's National Team gave the nation a thrilling roller coaster ride against Portugal. The ride ended abruptly on a down note, but it also took us so high we can't wait to get back on. While you can't define the thrill of a roller coaster with numbers, perhaps they can help us understand what we just experienced. The numbers for this game tell the story of a wide open affair with more shots and goals than we should have expected. In the end Jermaine Jones' impossible 30-yard shot was the rare moment of skill that gave the United States the point they so desperately needed.

The United States and Portugal took 36 combined shots in the match, which is the 3rd highest total in the 36 tournament games so far. The reason they shot so much is because they connected on SEVENTY-NINE percent of their long ball passes (passes over more than 20 yards). They made 91 such passes and completed 72 of them. Those passes will break defenses down. To put that in perspective, on the same day, Russia and Belgium completed 65% of their 103 long passes and South Korea and Algeria completed 64% of their 91 long passes. Portugal actually shredded the United States defense completing 84% of their 51 long passes. This was the main reason they were able to get off 21 shots in the game. The U.S. will have to defend these balls better against Germany or 2 goals will be the minimum they score.

The game funnel shows that there were more shots than expected in the match but that shots in the box were basically in line. The extra shots taken in this match were primarily outside the box. So while long passes were getting the teams in position to score, the defenses did a solid job keeping the shots from being too dangerous. 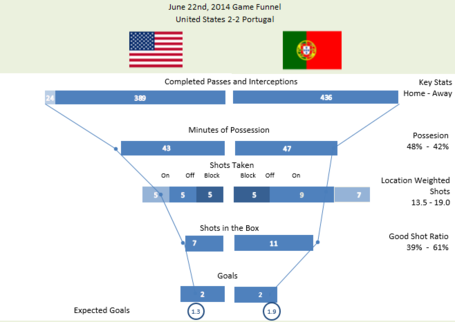 The obvious zero to the naked eye has to be Geoff Cameron right? He failed to clear that ball like a kid in U-10. And at the end of the match, when Ronaldo lobbed that perfect cross we saw Geoff unable to get a head on it and clear the win. However, other than those poor plays he was quite solid. He won two aerial duels, blocked two shots, had 2 tackles, 2 interceptions and 5 clearances. He was busy and dependable. So I am going to look elsewhere. And that elsewhere is Alejandro Bedoya. Perhaps he was still dealing with a knock from the Ghana match, but he was not present against Portugal. Bedoya had a starter low 39 touches. He did not register a shot or deliver a key pass. While his pass completion rate was high at 91%, Bedoya only completed ONE of THREE forward passes in the attacking half. The defensive stats don't show an active defender either. He registered just a single clearance and that's it. Bedoya gets the zero of the match nod and these numbers suggest that Klinsmann might need to look elsewhere for help on the left wing.

Again there appears to be an obvious hero. Jermaine Jones had his 2nd monster match in a row. He tied the game with a fantastic strike, defended (3 interceptions and 2 aerial duels) and had two key passes. But give Matt Besler a look. He had a team high 12 clearances and also led the team with 5 interceptions. He blocked two shots and won two offside calls. He completed 94% of his 48 passes, including 5 of 5 long passes. He put up huge numbers across the board. My vote is for Matt Besler who was instrumental in keeping Portugal at bay for the 85 minutes in the middle of the match.

So far the United States is getting it done in the group of death by finishing their shots. It's that simple. They've held the ball for just 43% of the time, been outshot 41 to 23 and have taken roughly the same quality shots as Ghana and Portugal. The United States has simply finished 17% of their shots while holding their opponents to 7%. All of these metrics point to a team that is sitting back to defend first and looking to counter. So far the strategy is working. Can they keep it up against their toughest test yet? Show your bracelet to the roller coaster attendant, we're about to start climbing.

Vote below on who you think was the Hero and Zero of the match.