Part 1 of the 3 part series that relives the World Cup history of the USMNT Group G foes. Part 1 focuses on the Ghana Black Stars.

Ghana qualified for their first appearance in the World Cup in 2006. The Black Stars were a well-respected side in Africa having won four Africa Cup of Nations trophies, but were a relatively unknown team globally. They entered the World Cup ranked 48th in the world and strong underdogs in Group E, which included the US, Italy and the Czech Republic.

In 2002, The USMNT had experienced their greatest run through the World Cup since 1930, making the quarterfinals before narrowly losing to powerhouse Germany. Now heading to the country that had ended their title hopes, the US had continued to improve and were FIFA's 5th ranked team in the world. The expectations for the team were sky high.

Little did everyone know that the unknown African country at 1/7th the size of the US would ultimately stand in the way of the US and a successful World Cup campaign.

The US inexplicably came out flat in their opening game against the Czech Republic and were decimated by a score of 3-0. 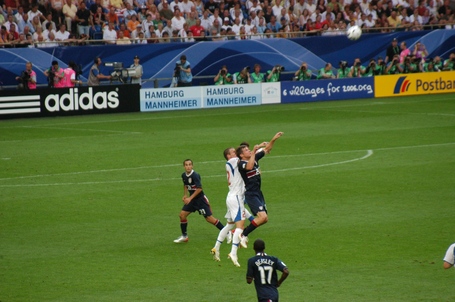 The loss meant that a point against #2 ranked Italy in the next match was necessary to keep their hopes alive. The US responded with a gritty performance that stands today as a signature match. Down a man for 43 minutes, the US held off the Italians for a 1-1 draw. The match included a bloodied Brian McBride, three red cards and a controversial penalty but the United States' resolve endured. The result set up a vital clash between Ghana where a 2nd place finish in Group E was very much attainable.

Despite earning just one point against the European sides, the US would advance to the round of 16 with a win against newcomer Ghana and an Italy win over the Czech Republic. Both outcomes were very possible to imagine.

But just as in the losses to Germany, Ghana would get the first score. In the 22nd minute Haminu Draman would get a foot on Claudio Reyna's ball. In the process their knees collided. Reyna went to the ground with a sprained knee. There was no support behind him and Draman dribbled the ball to a naked Kasey Keller and sent home the clean finish. If their knees hadn't collided Reyna would have been in a decent position to slow Draman down and wait for reinforcements, but it was an unlucky break for the US. Reyna would leave the match for good a few minutes later. With Mastroeni and Pope out with red card suspensions, the US would be without three key players.

In the 43rd minute the US would put together a brilliant goal. DaMarcus Beasley single-handedly took the ball from three Ghana players at the top of the US' attacking third. One dribble later he sent a beautiful cross into the box and Clint Dempsey left no doubt about the finish. The US had equalized before the half.

But they would not make it to the break tied. Four minutes later Oguchi Onyewu was called for a foul in the box on Razak Pimpong. Pimpong had stopped his run as the pass his direction had sailed behind him and an oncoming Onyewu bumped him. Most referees would restrain from making the call. But not this time. Current Ghana coach Stephen Appiah finished the penalty kick and sent Ghana to the half up 2-1. "I am disappointed in the judgment of the referee," US coach Bruce Arena said after the game. "We would have liked to come out at halftime even, with a chance to win the game. That was a big call."

The US mustered only a few good chances in the second half, unable to capitalize on 32 Ghana fouls in the game. Brian McBride in the 62nd minute sent a diving header off the near post. And five minutes later, Onyewu was given his chance at redemption. Donovan sent a beautiful corner kick across the box to the giant center back but his header sailed just over the cross bar.

The US fell 2-1 and the loss stung even more as Italy eliminated the Czech Republic. Donovan would sum up the disappointment. "The worst part is the finality of it. Even during the game, you don't get the sense this is it. Then the whistle blows and it's over."

The US would qualify for their sixth consecutive World Cup Final in South Africa. This time the US drew a manageable group including England, Slovenia and Algeria. The US was favored along with England to advance from the group. After a nail-biting 1-1 draw with England to open the campaign, the expectations to advance were even higher. But the US would not make it easy. They fell behind Slovenia 2-0 before storming back to earn a 2-2 draw. And they worried the US faithful until injury time before Landon Donovan cemented himself in US Soccer lore with a rebound goal and a 1-0 victory over Algeria. The US won the group with literally seconds remaining in their World Cup life.

That last second goal led the US to a match in the round of 16 with Ghana. Every US sports fan had seen the Donovan goal dozens of times on TV. The energy in the US around the World Cup and this team was palpable. And despite the loss in 2006, Ghana was anything but a household name to the average sports fan in the US. Were it Germany or Spain, the sentiment would be different, but the US was expected to beat Ghana. The problem was Ghana was still a very dangerous team and had more than enough talent to beat the US. They had a top class striker in Asamoah Gyan, who had just finished a 13 goal campaign in Ligue 1 for Rennes. And they had a number of midfielders who were playing in the top leagues in Europe. They were a physical and strong team that would give the US a difficult match.

Ghana's physical presence revealed itself early. Ricardo Clark was tackled and gave the ball away too easily in the US' defending third in the 5th minute. The ball landed at the feet of Kevin-Prince Boateng who dribbled up the field and put a left footed strike past Tim Howard. Again the US had surrendered early to Ghana.

The US would eventually begin to exert their will and dominate the game. But Richard Kingson, the Ghana goalkeeper, made several clutch saves. Only a penalty kick from Donovan, forced by a Clint Dempsey run into the box, got by Kingson in the 62nd minute. The US had tied the score. Was there another magical moment for the US?

Kingson was steadfast the remainder of the match and the 90th minute would arrive with the score still tied 1-1. The extra-time period had just begun when Ghana would strike with the crushing goal. Andre Ayew flicked a left footed long ball over the top of the US defense. Gyan, displaying an unbelievable combination of speed, power and skill ran under the ball, held off Bocanegra and sent a blistering strike over the arms of Howard. The US Soccer world was stunned by the brutishness and quickness of score. Howard would say after the match that "[Gyan] absolutely crushed it." Bocanegra was also resigned. "It was too easy. I ran with him, but he just outpaced me toward the end."

The Yanks of course fought hard until the end but the run was over. Ghana celebrated their first trip to the quarterfinals and had knocked out the US from the World Cup for a second straight time.

The US had only led for 3 minutes of the entire World Cup but had managed to make an invigorating run nevertheless. The US fans had tasted success on the big stage again and the anticipation for the next World Cup in Brazil was on the rise.

That moment is now here and the US again opens against a dangerous Ghana team. Will the US get their revenge or will Ghana send them on the road to an early exit in a difficult Group G?