The big picture analysis this week reveals a new franchise low for the Union defense. And we take a look inside the dominating possession performance by the Union against Vancouver.

It's certainly good to see Conor Casey rounding that bald head into form. His two goals in the 3-3 draw brought life to PPL Park and going forward the Union might have a scoring option up top. And it's just in the nick of time as the storyline has now officially shifted from the Union's struggling offense to a defense that is getting shredded on a consistent basis. More on that topic in "The Big Picture."

This game was a statistician's dream. The Union could not have dominated more, but they only pulled off the one point. The counterattack was the great neutralizer in the match and Vancouver had the dangerous players to pull it off. The Union completed 120 passes in their attacking third compared to just 34 by Vancouver. There have only been a handful of games in MLS this year where a team has had less than 34 completed passes in the attacking third. Only one of those games resulted in a point for the underachiever, so the Union are unfortunate indeed to have conceded points. The attacking passing led to the Union outshooting the Whitecaps 29-6 while owning 81% of the shots taken in the box.

Yet another game funnel looks good for the Union all the way through except for the goals. When looking at the game funnel look for any part of the funnel that doesn't look like a nice smooth funnel shape. This is where the statistical oddities in the match can be found. On the Union side it was the number of shots taken. They took 29 shots and they were good ones as well, with 17 coming from inside the box and their location weighted shots were 33.6. But for Vancouver it was all about the bottom line. Their funnel shape goes out of whack only on the goals line. They should have scored just 1.7 goals given their shots but they managed three. The Union clearly need to work on their counterattack defending. 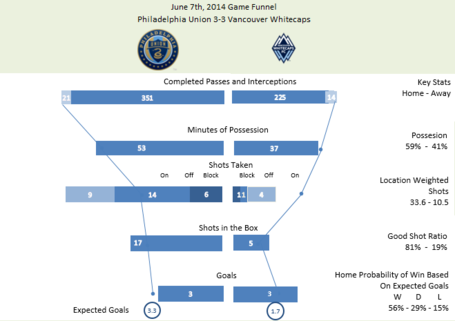 Welcome to the MLS starting XI Zach Pfeffer. After showing well in two substitution appearances, Zach made his first start of the year - and it wasn't a memorable start. Zach touched the ball just 20 times in the first half turning over 2 of them. He never got involved defensively either registering just a single tackle among all the defensive statistics. Some will point to Fabinho getting juked to the ground by Hurtado on the Whitecap's second goal, but Fabinho was also involved on a number of key offensive linkages with Maidana in the 2nd half. Pfeffer did not impact the match positively so he is the zero of the match.

For the second match in a row the race is close between Conor Casey and Cristian Maidana. Maidana assisted on all three goals and was the catalyst driving the offense with SIX key passes. But goals are still the most important statistic in soccer and Conor Casey had two of them. And neither goal was a gimme. This week the hero award goes to Casey for bringing the Union and PPL Park to life with two exciting goals.

At the end of the DC United match the Union were in the midst of an 0 for 55 shot shooting slump. No Union player had scored a goal for four consecutive matches. Since then the Union are averaging 2.4 goals per game, scoring 12 goals on 91 shots. The 12 goals over the last five matches actually ties a franchise high from the summer of last season. Now a 13% finishing rate isn't exactly lighting up the nets, and its only average (10%) when you take out the three penalty kick goals, but Union fans will take it.

What now can't be understood is the Union defense. For the first 11 games the Union allowed a merely pedestrian 1.27 goals per game. This was while waiting for Sheanon Williams to be fit and for the team to acclimate a new center back. But in the last five games the Union have allowed 2.6 goals per game, the worst defensive output for five games in franchise history. In fact, the next worse run of five games were the first games the Union ever played. They gave up 12 goes in their first five matches. Here is a chart that tells the odd story of the Union and goals in the 2014 season. 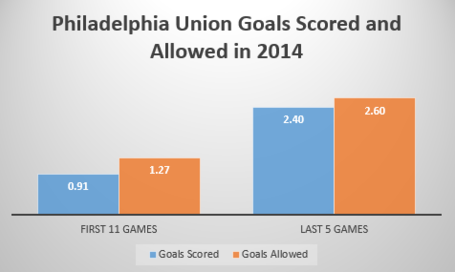 There doesn't appear to be any one thing or a particular lineup causing the decline. Wheeler, Berry, Okugo and Williams have all started at center back over that stretch. Carroll only played in the LA Galaxy match, but that was a terrible match where the Union allowed four goals. In four out of the five matches the right and left back were Gaddis and Fabinho, respectively. MacMath has been in goal every minute. Have the Union been pressing up more in an effort to change their scoring fortunes leaving more space for the defense to cover? Have the Union simply run into a stretch of hot offensive teams? Are the shuffling lineups finally catching up to the team?

Vote below and see what the Union fans think.

The Whole Story: Matchday 16 The Vancouver Whitecaps Visit Before The Break