The Stat Zero of the match this week is thrown out to the crowd for judgement and we look at the Union shooting pre and post Jack. What would statisticians say about the fans' woes?

As expected the talent difference proved too great for the Union to overcome in Seattle. The Union effort and improved skill were evident but Seattle was able to make the clutch plays to pull out the deserved home win.

The game funnel shows a game controlled by Seattle with the exception of shots taken. But that metric is even fool's gold for the Union as seven of those shots were taken from Zone 5 (way outside the box), which have less than a 3% chance of reaching the net. Seattle actually won the location weighted shot war (shots taken adjusted by the quality of the shots) by a comfortable margin 12 to 8.3. In the end, Seattle won the expected goal match by a score of 1.7 to 0.8 and the score matched the expectation as closely as possible. 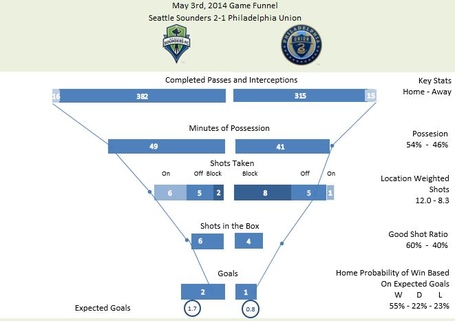 It's John Hackworth's least favorite statistic but it told the story in Seattle. The Sounders had six shots on goal to the Union's one. The difference reflects multiple gaps in quality between the two teams.  The quality of the shooting, the openness of the space the shooter had and the location of the shots all favored Seattle. Andrew Wenger's single shot on target was an easy response for Stefan Frei 's only challenge of the match. Meanwhile Zac MacMath was tested throughout the night and really came up big to keep it close. For as good as Union fans wanted to feel about the effort on the pitch, this statistic tells a story of a much wider gap.

I'm going to look to the wisdom of the crowd for the Zero this week. It's too close to call. I will give arguments for 3 players and please vote below for the zero.

Maurice Edu- On the positive side Edu played his usual assertive game. He completed 80% of his 40 passes, made one key pass, and put up solid defensive stats with four clearances and two tackles. He also put the head in the air that made Evans jump and concede the own goal. But he turned the ball over a game high eight times (six dispossessed, two turnovers) and lost Martins at the top of the box on the equalizing goal.

Aaron Wheeler- On the positive side Wheeler put up very solid defensive numbers. He had nine clearances, four tackles and won an offside. But he abandoned his spot to challenge Evans on the header that assisted Obafemi Martins' goal and never even challenged Evans. Then he was marking Marshall on the game winning goal.

Sheanon Williams- Sheanon had one of those statistical matches that makes you wonder if he was a substitute. On defense he only registered 1 clearance and 1 interception. He completed a meh 71% of his meh 28 passes and he received a yellow card on a poor foul which endangered his team. He didn't make the glaring mistake but he also failed to deliver much by the way of positive impact.

It's been tough finding a Hero lately. Lots of options for Zero but few are earning obvious Hero awards. But this week's award goes to a deserving Brian Carroll. He played a solid game and was constantly cleaning up messes in the final third with three clearances and three interceptions. He also completed a team high 53 passes with 84% accuracy and three of them were key passes (second to Maidana's four). He was second best on the team in turnovers per touch and also had the second most touches.

Fourteen Union shots and just one was on frame. The upbeat rhetoric out there about the Union's goal scoring refers to turning tides, bad luck and small sample sizes. After 395 consecutive minutes (and counting) of a no goals in the run of play you have to wonder if the sample size is any longer an excuse. To get a sense statistically of the Union's shooting performance here is the breakdown, looking at the pre-Jack and post-Jack games.

The first observation is that the Union have taken worse shots since Jack McInerney was traded. The shot locations are about 20% more difficult than before. Even adjusting for that the Union shooting has worsened significantly (and keep in mind one of the post-Jack goals was a penalty which inflates the numbers). The pre-Jack finishing rate has dropped from 9.7% to 4.5%, a 54% decline. The adjusted finishing rate only drops from 9.5% to 5.5%, a 42% decline, when adjusting for the Union's worse shot selection.

But the big question is, is all of this statistically significant? Or to it put bluntly, are the Union really this bad at shooting? And the answer is, we still don't know. For the full season, the confidence interval around finishing rate is between 3% and 13%. That means that statisticians can only be 95% confident that the actual true finishing rate of this team is between 3% and 13%. That means they could get worse, but they also could end up being an above average finishing team.

However, statistics do tell us that they are 87% certain that the post Jack finishing rate is lower than the pre Jack finishing rate. Whether or not that is due to the worse shot locations or worse finishing is unclear. But the trend is clearly not good and statisticians are almost certain something has changed for the worse.

But statistics won't help us out with this team as a whole for quite a while. The Union would have to finish 7% of 400 shots before we could say that they are a below average shooting team (less than 10%). They are not on pace to even shoot 400 shots this year. Thus is the nature of this game of soccer. Even a full year's worth of shots and miserable shooting (7% is pretty miserable) is not enough data to suggest that a team is truly a below average shooting team. They may just have been unlucky. I guess we have to suck up the rhetoric a little while longer and hope the team begins shooting like a playoff team.

Who is your vote for Zero of the Match?