Part 1: Wheeler vs. Berry - An Introduction to Defensive Statistics

Part 1 of a 2 part series looking at the Union defenders. The first post examines individual defensive statistics and which ones matter the most.

Share All sharing options for: Part 1: Wheeler vs. Berry - An Introduction to Defensive Statistics

The Wheeler-Berry debate is still a hot topic each week as mis-queue's and goals pile up on the Union defense. The debate took an interesting turn against New England when both were put on the pitch at the same time, and the result didn't bode well for their cases. The five goals allowed against New England turned the Union's average defense into a below average defense in an instant. Twenty goals allowed in 13 games for a 1.53 average per game is behind last year's pace of 1.29. The consensus going into the season was that this young defense was supposed to improve over last year's mediocrity. This two part post will examine the individual defenders of the Union and make a more clear case for who the starting four should be. Part 1 walks through the landscape of individual defensive statistics and determines which ones matter most.

Whoscored.com offers a collection of defensive statistics, and here is what they have and their definitions.

Another stat based website Squawka.com also tracks blocked shots, clearances, interceptions and aerial duels. They also track a potentially interesting statistic called Defensive Errors. However when I pulled the data for the Union they only show 2 defensive errors all season. I don't think we share the same definition of errors. I'm sticking with Whoscored.

Whoscored tracks the above statistics at the individual player level. The other vital defensive statistic is shots conceded, but those can't be attributed to any one player. So then, do any of these individual statistics matter? Below is an example of way to analyze that question. The chart shows tackles per opponent's minute of possession by MLS team and its relationship to goals conceded in 2013. 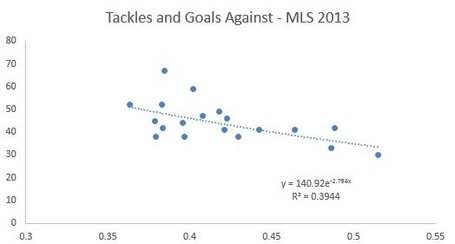 There appears to be a relationship between tackles and goals conceded. The more tackles the lower the goal amount. From this chart and resulting regression it can be determined that on average a tackle reduces goals conceded by .077. I did this same analysis for all of the defensive variables. Here are the impacts of each statistic as well as the R square of the relationship.

The final two columns are made up statistics. The GAAU * R2 is the goals avoided per average unit multiplied by the R squared to get a sense not only the impact on goals against but the amount of variability around the best fit line (the higher the number the better the fit). The index is just the percentage of the GAAU * R2 variable compared with the best one, which is Defender Aerial Deuls Won. According to this unofficial index, the next most important statistic is Tackles, followed by Offsides Won, Clearances and Interceptions. Surprisingly, it appears as though blocks really have no impact on goals allowed. So there you have it, Defender Aerial Duels Won and Tackles are the most correlated statistics to reducing goals scored.

You can read the table to mean that an interception is worth about 13% as much as winning an aerial duel when trying to reduce goals scored. For more detail on these statistics and how this logic was developed read here.

Looking at correlations and indexes can make it difficult to put the statistics into context. But the defensive atrocity against New England allows us to look at extreme examples of goals allowed and see if these statistics really do indicate good and bad performances. Here is a chart of defensive statistics in the Union's two clean sheets and the one 5 goal debacle. 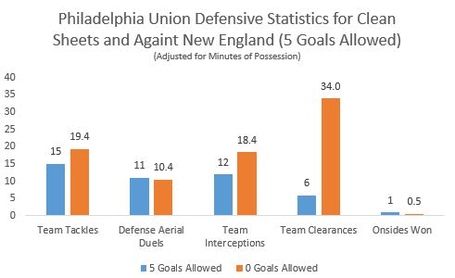 The Union had more tackles, interceptions and clearances in their clean sheet games. The Union defense won more aerial duels against New England but that might be due to the fact that both Berry and Wheeler started in the same game. Winning aerial duels is a strength of theirs.

While these statistics can start to paint the picture of a defender they still leave gaps in our understanding of defenders. For example, they don't address a player's position on the field and how that position might alter what an offense does. If a defender is in the right spot the offense may make a pass backwards or at least not aggressively toward the goal. Also, these statistics don't speak to a defenders offensive capability.

The next post will examine the Union's players in some detail, focusing on the Wheeler-Berry debate. But here are the current Union leaders in each of these defensive categories.