A Visual History of the Nowak and Hackworth Eras

A look at the ups and downs of the Union's five year history and the two coaches who have paced the sidelines. Hackworth's tenure to date looks just a bit better than Nowak's, but Hackworth's teams have been inconsistent in their goal scoring and that has brought wild swings in results.

Share All sharing options for: A Visual History of the Nowak and Hackworth Eras

There were high hopes for the Union this year after a busy offseason, but fans and analysts have seen the team reach new franchise lows. It's time to put this low point in context and compare it to the four other seasons of Philadelphia Union soccer. As you'll see from the charts below, it's been a roller coaster ride - and too little of this ride has been playoff quality soccer.

Here is a chart of the Union's points per game across the four plus years. I've plotted a five game moving average to smooth out the data and help the eye find trends. The lines I've drawn (orange for Peter Nowak and green for John Hackworth) are not regression lines. They are my lines to further help show the larger trends. I've marked a line at 1.5 points per game as the playoff quality line. Averaging 1.5 points per game is the minimum level generally needed to make the playoffs in MLS. 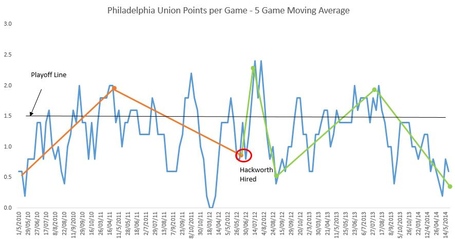 The Union team started poorly in 2010 - but that is to be expected for an expansion team. Nowak impressively brought the team to playoff quality by early 2011. From that point on the team went on a long slow decline over the next year. There were periods of playoff quality soccer but also deep droughts. The wild swings in quality seemed to match the coach's temperament.

After much calling for the guillotine, Hackworth took over as head coach on June 13th, 2012. The team immediately responded with their greatest run of games in Union history. This is a typical short term reaction to new coaches according to analysis done for the book Soccernomics. The honeymoon period was short lived however as the team immediately sunk back to the level of play left by Nowak.

Hackworth then slowly built the team into a playoff contender, peaking around May of 2013 and rolling through most of last summer. But starting in August the Union stopped playing playoff quality soccer and they haven't had a good five game stretch since. In fact there hasn't been a five game stretch where the Union have averaged 1.5 points per match since July of last year. That is the longest such stretch in franchise history. Notice how the decline trend continued even after the busy offseason last winter. The decline has been long and painful for fans, and the Union find themselves near a low they have not seen since early 2012.

How do the coaches compare when looking at scoring the ball and conceding goals? The results are similar but there is one fascinating difference in their tenures. Here is a chart of Union goals scored, shown with a 5 game moving average. I kept the trend lines from the points per game chart consistent.

A couple of interesting observations immediately jump out. Hackworth's teams are much more feast or famine when it comes to scoring goals. Nowak's teams were largely consistent. The more interesting thing is that Nowak's points per game trends had very little to do with how much his team was scoring. During the Union's initial rise to playoff stature, their goal scoring remained relatively modest. And while Nowak's 2011 team was at the peak of it's goal scoring prowess, the winning was beginning to decline. On the other hand, Hackworth's ability to win is very clearly tied to how many goals his team was scoring.

Initially you can see the strong improvement in the Union defense in 2010 that was driving the improvement in points per game. They started out averaging over two goals per game and during their playoff run were allowing less than one goal per game for a good stretch of games. As far as Hackworth is concerned, the goals against seem to matter little when it comes to explaining wins and losses. Here is a table that shows that our eyes are not deceiving us. The numbers represent the correlation between points per game and both goals scored and goals allowed for both Union coaches.

That's a fascinating insight and I'd be curious what people think are the reasons behind such a dramatic change in numbers. It's eerie that the numbers flip-flop almost identically.

Adding it all up the two Union managers aren't all that different. 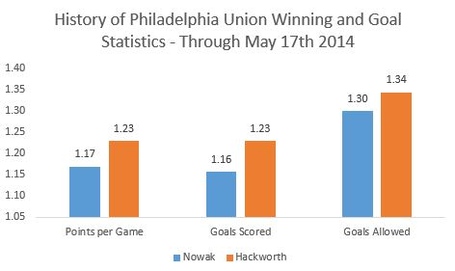 Hackworth has performed slightly better in points per game than Nowak did, but there are a number of disturbing trends in the results to date. First, Nowak left Hackworth a decent defensive club. Over the last year and a half of Nowak's tenure the team allowed just 1.09 goals per game. Hackworth has allowed 1.34 per game during his run. Hackworth's teams also have more goal scoring volatility. The standard deviation of Nowak's five game moving average for goals scored was 0.38 and Hackworth's is 0.50.

In the end neither manager has established a consistent winning mindset for the club. The organization and team are still searching for that philosophy that will guide the franchise to the elite play the fans are hoping for.