Welcome to 1 in 100: Putting the Union Shooting Woes in Perspective

Since The Jack McInerney trade the Union have converted 3.8% of their shot attempts into goals. That's 30% worse than the worst MLS team last year. Things have to turn around, right? Right?

Share All sharing options for: Welcome to 1 in 100: Putting the Union Shooting Woes in Perspective

There is really nothing left to discuss but the shooting. While defensive breakdowns have been mixed into the "what's going wrong" conversation, the Union have allowed 4 goals in the last 4 games. A Goals Against Average of 1.0 would put any team in the playoffs. Any team but the 2014 Philadelphia Union. During that same stretch of games, no Union player has scored from the run of play. They have collectively taken 55 shots and scored on exactly none of them. The average MLS team would have made 4.8 of those shots. So how bad is the difference between 0 goals and 5 goals? Really bad.

We know the finishing rate of an average team from the locations the Union shot them from is 8.7%, and the shots total 55. We can plug those numbers into a binomial distribution and look at the distribution of expected goals scored. The binomial distribution actually does a decent job of predicting goals scored. You can read a detailed analysis of it here if interested. Here are the probabilities of scoring different numbers of goals across 55 shots assuming an average MLS shooting team.

As you can see the probability of scoring zero goals is less than 1% over 55 shots for an average MLS team. To be precise its 1 in 142. The most likely outcome is 4 goals scored with a probability of 19%. 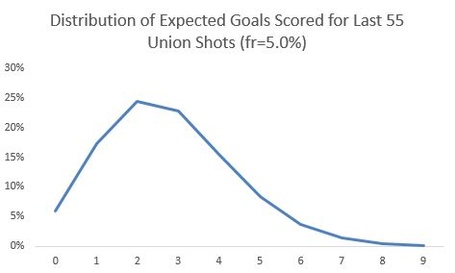 For those of you used to seeing other elements of the weekly post here is the hero and a stat of the match.

The Union completed 1 pass inside the United 18 yard box in the first half. It was a corner from Maidana.

There are many candidates but focus on the positive!

Cristian Maidana was the hero of the match. He led the team with 3 key passes and completed 85% of his passes. He continues to be the only player pushing the ball into the box besides Fabinho. Maidana completed 4 of 13 shots intended to land inside the 18 yard box. The rest of the Union team completed 3 of 22. At least Fabinho attempted 7 such shots despite not completing any.

The Game Funnel this week is eerily reminiscent of the Montreal game. The Union controlled all statistics except the final and most important stat, goals. 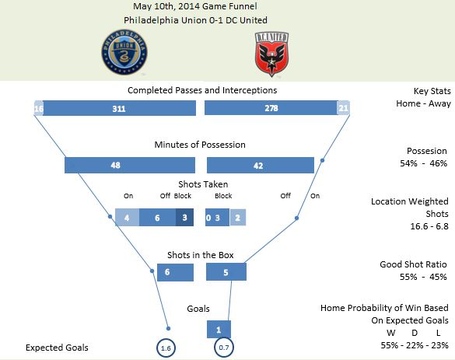 Union fans have nothing left to do but wait for the team to punch in goal. Who will score it? How will it be scored? Tune in Wednesday to find out if they can end their 490 minute streak without a goal in the run of play and the 380 minute streak with no goals from a Union player.