Every week we "Monday Morning Manage" every game with our fellow Union faithful. What could have been done better? What were the missed opportunities? Did that sub really need to happen? We bring all the talking points to you each week right here.

Share All sharing options for: Monday Morning Game Changers Will Not Be An Invisible Blog Post This Week

I would hope that if any mothers were taken to the Philadelphia Union game for Mothers Day - they at least had a fun time being with people they cared about to make up for the disappointment of yet another defeat.

In last week's article, I ran a poll asking what would happen first out of a list of unlikely events. Two of those happened in the same game, so well done to the 2% of voters who thought Cristian Maidana would play a full 90 minutes and the 17% of you who thought Austin Berry would get the nod in central defense over Aaron Wheeler. Despite those changes it was the same old problems that haunted the Union in this loss. The Union outpossessed and outshot D.C. United but yet again no goals were scored.

On to this week's game-changing moments that changed the game:

Christian must have been invisible right? How else do you allow any player that much room in the penalty box? Ray Gaddis had gotten pulled too far into the center of the box, and Vincent Nogueira was the on the right wing, but nowhere near Christian. His shot was blocked by Gaddis, but went straight to Chris Rolfe, who was also in far too much space as the defenders dropped too deep. Maurice Edu stood watching his player get to the ball, and score (again...).

Whether it is the sudden tinkering with the formation that has happened the last two games causing players to not know where they should be or the players are not paying enough attention, these problems continue to happen. And they have to stop or the Union will continue to lose.

2) OFFSIDE (imagine Dixon, Keown, Adams and Winterburn holding their arms in the air).

There were two "offside"/"not offside" decisions made that could be called game-changers. The first one occurred on Rolfe's goal where two United players were standing in a position where they could be offside. Things were easy in the days of Arsenal's fantastic back four - if you were in an offside position, you were offside. Nowadays, you have to be actively interfering with play either by playing the ball, or interfering with an opponent. In this case, the referee and his assistant concluded the "offside" players didn't touch the ball, didn't obstruct Zac MacMath's view, and didn't interfere with MacMath's ability to make a save.

That's where the discussions can begin. They were clearly in the way stopping MacMath from making a dive to save the shot. However, you also have to take into account the fact there was no way MacMath was going to save that shot. Based off everything, it is fair to conclude the officials got it correct.

Next, there was the decision screencapped below, where D.C. United's Eddie Johnson was given offside when he went through to finish with a neat chip over MacMath. 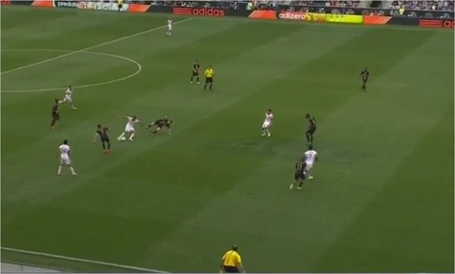 It looks like Johnson was actually onside when the pass was played. Fabinho had dropped back too much, and looked level with Johnson when he should have been in a line with the rest of his defense. This was a lucky break for the Union and although you can't guarantee Johnson would have scored if the flag stayed down, it was a chance he should have been given. It appears the assistant referee was a couple yards ahead of the play and from that angle it would have looked like Johnson was offside. These were both tight decisions, and far too close to have any real gripes about.

3) Danny Cruz coming on for the injured Brian Carroll.

Brian Carroll had to be replaced at half time because he had apparently pulled a groin muscle though it would have been nice to see such a substitution made by John Hackworth without stemming from injury. For the second time in two games, Danny Cruz, Carroll's replacement, made a difference going forward. The Union were far more lively with him on the field as opposed to the slowed down possession soccer that was being played. Suddenly the chances started to come for the Union, and Cruz had a bullet of a shot that was blocked just before it got to the keeper. Based off this showing Cruz could get some starts in the future, and it would be deserved.

4) Our Strikers don't understand you get goals for putting the ball in the back of the net, and not hitting the keeper.

As a one-off occasion, it would be very harsh to have a go at Andrew Wenger, Conor Casey, Cruz and Maidana for not finishing the chance from the video above. There were two great saves by Bill Hamid, there was a great block on Cruz, and if Maidana was on his left foot, maybe it would have been different. However, it's not just a one-off. The strikers time and again have been put into a position to score, and haven't been able to finish. While Wenger's turn to get through on goal was sublime, the lack of an end product from him rendered it meaningless. Hackworth went from saying they won't buy anyone in the summer during the midweek press conference, to saying they will be buying someone in summer. His patience may be running thin with the strikers currently available as they could well be costing him his job.

Being at the bridge end of the stadium instead of the river end, I was too far away to see this "game-changer" in person. I was upset that Austin Berry couldn't score a free header from the edge of the six-yard box, with no one in the goal. But then i saw the replay, and noticed that Bobby Boswell got a faint touch on the ball, and that was enough to put Berry off, sending the header flailing into the Sons of Ben. When Hackworth is saying the Union are inches away from getting goals, he isn't lying.