The stat zero of the week is another team award, but who walked away the hero? This weekly look inside the numbers reveals that the Union struggled mightily to contain the Fire's long passes.

Share All sharing options for: Fire 2-2 Union: Stat Hero of the Match

For a little while it looked like the Philadelphia Union were going to get away with an extremely lucky three points. In the end they were extremely lucky to get one. The Union scored on their only two shots on target and mustered just a meager seven shots, while the Chicago Fire fired 12 shots inside the 18 yard box (and seven more from outside). In the second half the Fire went on a shooting barrage. They took .55 shots every minute of possession when the MLS average for a home team is .31. Zac MacMath made 5 saves including the game sealers and the Union can exhale and be happy for the point despite the fact that they blew their third late lead of the season.

Notice the game funnel starts very thin at the top. Both teams completed very few passes in what was a very sloppy game. The Union's 196 completed passes was by far their lowest total of the season. And then with 47 minutes of ball possession check out the bulge to the left for the Fire. 19 shots. 12 in the box. And the shots were excellent ones. Their weighted shots were 24.1 which means the expected goals from their shots were the same as a team that takes 24.1 average shots. In the end the expected goals for the Fire was 2.4 and the Union should have scored just 0.7. By far their worst performance of the season. 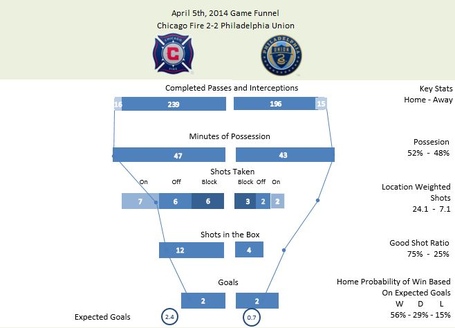 How teams get more shots than expected is hard to determine. But the long ball passing statistics in this game I believe provide some insight. The Fire completed 31 of their 48 long balls or 65% (passes of 25 yards or more). Compare that with the Union who attempted 42 long balls and connected on just 16 or 38%. Connecting on long balls catches the defense out of position and the Fire were able to do that 15 more times than the Union last Saturday.

The stat zero of the match is 65%. Guess what that statistic describes. No, not the long ball completion percentage of the Fire. That's the passing completion rate of the entire Union team. That includes short passes. The average MLS team completes about 320 passes per game and the Union completed just 196. Who were the culprits? Not Vincent Nogueira as he completed his usual 80+%. A lot of players passed more poorly than usual. Ray Gaddis was at 68%, Maurice Edu at 67%, Leo Fernandes at 65%, Sheanon Williams at 63%, Sebastien Le Toux at 59% and Aaron Wheeler at 47%. That's a lot of players passing below the norm. It was the combination of this poor collective passing and the long ball accuracy of the Fire that resulted in the Fire's 19 shots.

The award this week was very much up in the air until the last seconds of the match. Penalty kicks are converted at a rate of about 78% in MLS games. With Mike Magee standing over the ball in the fifth minute of injury time he was dreaming of a 3-2 Fire win. 3 points for the Fire and 0 for the Union. Apply the 78% probability and when Magee stood over the ball the Fire had 2.56 expected points and the Union had 0.22. But Zac MacMath rose to the occasion big time and saved an excellent penalty kick from Magee and then the rebound shot. Those 2 saves in 3 seconds gave the Union .78 points and took 1.56 points from the Fire. There's no statistic that can create that much value in this game. Congrats to Zac!

Two trends this post has been tracking regressed to the mean in this match. In the last post I talked about the Union's Total Shot Ratio of 56% being sixth best in the league. The Union TSR in this game was 27%. That will drop them to the middle of the pack. Then there is also the issue of the Union's poor midfield shooting. Last week I noted their finishing rate was a paltry 7.2%. Well on Saturday the midfield shot a nice 29%. It can now be said that the midfield shooting is on par with the MLS average. The one disturbing trend that did continue is that the forwards did not register a single shot for the second consecutive game. Let's hope that is the stat that regresses to the mean against Real Salt Lake this week.