Free Kicks, Throw-Ins and Corners, Oh My! The Numbers Behind the Union's Set Piece Defense

Share All sharing options for: Free Kicks, Throw-Ins and Corners, Oh My! The Numbers Behind the Union's Set Piece Defense

Three of the six goals allowed by the Union this season have come off of set pieces. No statistician in the world would tell you that anything can be determined from so little data, but the Union fans have seen enough history to know the Union struggle with set pieces. But do they really? I wanted to dig into the set piece numbers to see just how bad the situation is.

First let's ground ourselves with some numbers. The shout out for providing this data goes to American Soccer Analysis who continue to push boundaries of soccer analytics. Below is a doughnut chart (because I like doughnuts more than pies) that shows the shot distribution in MLS in 2013 by the source of the shot. 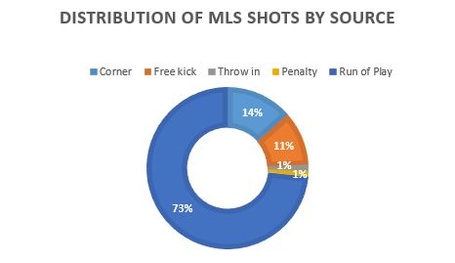 Almost 3/4 of all shots are taken during the normal run of play. About a quarter of all shots are taken off of set pieces: throw-ins (1%), corners (14%) and free kicks (11%). You can count penalty kicks as set pieces but they really stand alone in their own category. Now let's look at the finishing rate of shots from these different sources. Finishing rate is the percentage of shots that end up as goals. 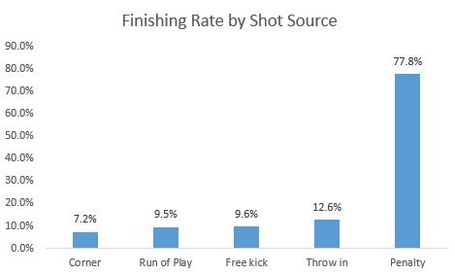 Penalty kicks are not surprisingly in a league of their own at 78%. But interestingly enough, shots from throw-ins have the next best finishing rate at 12.6%. Shots from free kicks and the run of play are roughly the same. Corner kicks have the lowest finishing rate at 7.2%. Free kick (at least free kicks that have a good chance of leading to a shot) and throw-ins are difficult data to come by. But corner kicks are easier. It might surprise you that only 35% of corner kicks result in a shot taken. Combine that with the 7.2% finishing rate when the shot is taken and only 2.4% of corners result in goal. Only about 1 in 40 corners are converted. That's roughly the same odds as taking a shot from 10 yards outside the 18 yard box.

So how do the Union measure up against these set piece numbers? Let's look at throw-ins first because that is the least common shot type. MLS averages just 5.68 shots from throw-ins per team per season. Last year the Union gave up 6 and they gave up one goal on those shots for a 16.7% finishing rate. This year they have given up one shot from a throw-in. So far, nothing out of whack.

Next let's look at corners. Here is a chart of the percentage of corners resulting in shots and the finishing rate of those shots. It should also be point out that in 2013 the Union gave up exactly the average number of corners (167). 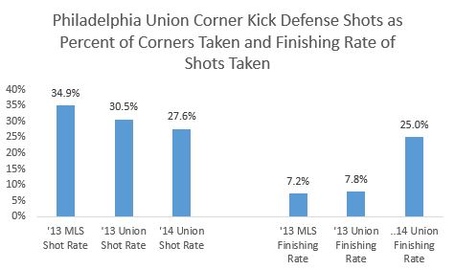 If you multiply the two 2013 numbers together (30.5% * 7.8%) the Union were actually slightly better than average defending corner kicks mostly due to the fact that they gave up shots on almost 5% fewer of them. This year the Union are doing an even better job in not giving up shots, however the finishing rate is very high. That said, the sample size is only 8 shots - so it's really too early to tell. I would trust last year's data and say that the Union's corner kick defense is average to slightly above average.

Last we'll look at shots from free kicks. Again, the number of free kick shots allowed by the Union is right at average (47.4 versus 48). Given there isn't good data on dangerous free kicks I looked at the percentage of shots from free kicks that resulted in shots on goal. This measure can indicate that a player was more open when taking the shot off the free kick. Here is the chart. 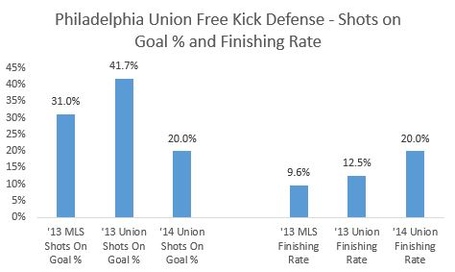 The figure that jumps out here is that 42% of the shots on goal that the Union allowed compared to the league average of 31%. That 34% increase is almost exactly the percentage difference in finishing rates in 2013. The result of all this is that the Union were tied for third in the league last year in goals allowed from free kicks (despite giving up an average number of shots from free kicks). It appears to be a function of allowing too many shots on target. This year it is too early to tell if they have solved the problem. They are currently just a little short of last year's pace.

When looking at the data it does appear the Union struggle defending free kicks. What might be the surprise in this analysis is that they are okay at defending corners. You would like this part of the defense to be a strength but that is clearly not the case. There is work to be done here, especially in clutch moments. 2 of the 3 set piece breakdowns this year were late in the game and relinquished points. Are these the growing pains of a very young team? Or is another issue at play here?