Both teams are desperate to regain points after disappointing results in March. What are the key matchups that each team will try to exploit to get a result in the win column?

The 1-1-2 Philadelphia Union travel to Toyota Park to face their second consecutive winless club, the 0-1-3 Chicago Fire. This is the first of three matches between the Union and the Fire this season. In their previous meeting in August, MLS MVP Mike Magee broke the hearts of the Union with a laser finish in the 75th minute. The Union went down 2-1 despite a strong overall performance and their playoff hopes took big step back that night. Between that last match and their last two matches this season, the Union have a few disappointments to correct this week.

What To Expect from the Philadelphia Union

What we can expect from the Union begins with who is playing with the back four. Will this be the game that Sheanon Williams and Austin Berry return to the back line? If you read through the lines of Hackworth's statements in his weekly press conference, it's more likely that Berry and/or Williams will see time as substitutes. "I think that Austin is back to being able to play at a hundred percent. The only thing that, similar to Sheanon Williams, you have guys who haven't played games and...there's nothing you can do in our training environment to really prepare a guy for getting in that rhythm of game. So those guys gotta get in a game eventually to truly prove that they're ready," said Hackworth Wednesday. Expect to see the same starting back four of Fabinho, Wheeler, Okugo and Gaddis. This unit has been surprisingly solid over the last two and a half games. But it would be great to see Williams and Berry get back into the mix. Williams could provide a much needed lift on the right side offensively, as Sheanon led all MLS defenders in assists last year. And Berry would have extra incentive to avenge the team that chose to trade him just before the start of the season.

On to the midfield, where Hackworth listed Cristian Maidana as questionable with a calf injury. If Maidana can't go, that opens up two possible changes. Leo Fernandes could start in place of Maidana and the 4-2-3-1 could remain in tact, with Fernandes taking over on the left as he has in his last two substitute appearances. Or Hackworth could experiment with a 4-4-2 and start both Casey and perhaps Hoppenot up top. Odds are he stays with the plan and gives Leo another chance if Maidana can't go.

Update: with Jack McInerney traded to Montreal's for Andrew Wenger I expect Casey to start up top and the 4-2-3-1 to stay in tact on Saturday. Read more on Andrew Wenger here.

Edu has shown more push in the attacking half over his 3 matches with Carroll in the back. Take a look at these successive heat maps for each game Edu has been paired with Carroll. 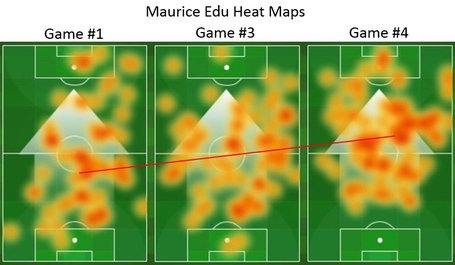 It's important to note the Union's possession has also increased across these three games. Either Edu is getting more comfortable with Carroll and the defense and is pushing up to aid the possession, or other midfielders are earning more possession allowing Edu to play forward. It's probably a mix of both. It's a positive trend in my view and one that indicates that Edu may be more dynamic in the final 18 as the season progresses.

But the bigger question about the Union is will the midfield finally begin to click with the forwards and start finishing their chances? This is the single biggest question facing the Union right now and it will only be exacerbated without McInerney. Is it a matter of time before the offense truly clicks or are formation and personnel changes needed?

What To Expect from the Chicago Fire

Everything starts up top for Chicago with MLS MVP Mike Magee leading the attack. Magee sat out the first two games with a hamstring and has not found his footing in his first two games back. Last year Magee took 22% of the Fire's shots and 27% of their shots on goal. In his two games this year he's taken just 15% of the shots in those games with none on frame. The Union will want to avoid giving Magee the looks they gave Marco Di Vaio last week. Magee's mate at forward Quincy Amarikwa has been adequately dangerous so far this year, scoring two of the team's six goals. The forward combination will be a challenge for the Union defense with one hot striker and the MVP looking to get on track.

Half of the Fire midfield is off to a great start this year. Harrison Shipp, the homegrown rookie from Notre Dame, is already hearing rookie of the year predictions for his play on the right. Of particular note are his dangerous crosses. He's tallied two assists already from corner kicks, and his matchup against Fabinho might be the most critical for the Union. Defensive midfielder Jeff Larentowicz has also picked up the scoring slack with two early goals. He's already reached his goal tally from all of last season. The left side of the midfield is likely where the Union will look to attack. Brazilian 25 year old Alex and Benji Joya have not made a significant impact so far this year. Hopes are high for Liga MX loaner and former USMNT U20 captain Joya though to make a splash, so he is a talent to watch out for. Joya and Shipp have switched sides this year, but I expect the Fire will want to see if Shipp will be given the space by Fabinho to loop in crosses. Either way, Gaddis and Fabinho will be tested by the promising wide midfielders.

The man that made Austin Berry expendable - Jhon Kennedy Hurtado - and ex-Union player Bakary Soumare make up a strong middle of the defense. The Union will want to attack from the sides which is more unsettled. Midfielder Mark Watson has started two games while Lovel Palmer also has started on the right side. Gonzalo Segares is questionable on the left side which would give Greg Cochrane the start. These unsettled fullback positions are one of the main reasons the Fire have allowed 1.75 goals per game this season. The Union will be looking to get the ball wide, so look for the activity of Le Toux and Fernandes if Maidana can't go.

Similar to the Union, the Fire are desperate to regain points they feel were left on the pitch. The Fire were a tiebreaker away from making the playoffs last year and they must be feeling the points will come. Because both teams are equally desperate for a result I predict a 1-1 draw. I see Magee and Edu breaking through for their first goals of the year.