A Look At The Union's Strength of Schedule

Examining the Union's strength of schedule to date and what to expect going forward. And then we examine the center of your soul....

Share All sharing options for: A Look At The Union's Strength of Schedule

This is the perfect situation for asking the question: is the glass half full or half empty? There's a depressing angle to this analysis of the Union's strength of schedule. And then there is a silver lining. Here's a chance to look deep inside your soul and answer that age old question.

The source data for the conversation comes from Playoff Status. They track the odds of teams making the playoffs for all major sports. For soccer, they give half a win for a draw. A team that has played 8 games and has 2 wins and 4 draws will have a 50% winning percentage (4/8).

First the bad news. According to Playoff Status, the Union have had the 2nd easiest schedule in MLS so far. Their opponent winning percentage is a woeful 41%. Only the Chicago Fire have had an easier schedule. The fact that Union sit in 8th place in the East after playing the most games in the league against the 2nd easiest schedule is just about as depressing as I can imagine. The pessimist in me is ready to throw in the towel on the season.

Here is a chart of the winning percentages of the Union's remaining games. 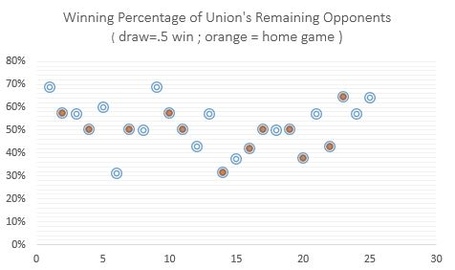 The next 5 games look particularly rough. Three away games in the next 5, all with teams playing above .500 or better. But there is a welcome run of games between game 14 and 22. Six of the 9 games are at home and only 1 team is above .500.. That will be the time the Union could string together a playoff run if they are playing well. That run begins the 2nd game in August, when the Montreal Impact come back to PPL Park and ends in early October against the Fire. The Union end the season against Columbus Crew twice and Sporting Kansas City. We can only hope those games are meaningful for the playoff chase.

The good news is the Union still have the 6th easiest schedule in the league going forward. The Union's full season schedule is rated the easiest in the entire league. The optimist in me says that if they can battle through the next 13 games and show signs of life, then they can put together a string of wins late in the summer and get into contention.