Impact 1-0 Union: Stat Hero and Zero of the Match

It's bleak and the numbers are there to back up what the eyes are witnessing. The Hero and Zero of the match are unorthodox in hopes that change is good.

Share All sharing options for: Impact 1-0 Union: Stat Hero and Zero of the Match

The Montreal Impact secured their first clean sheet and win last Saturday against the Philadelphia Union. The one to nil result was a new low for the Union still struggling to find their identity now more than a quarter of the way through the season.

The game funnel this week is somewhat misleading. The funnel is dominated by the Union's side all the way down until the goals. But prior to the Impact goal, Montreal actually controlled the ball 55% of the time. After they took the lead they sat back and employed a defensive counterattacking style that ultimately worked. Even still the Union's expected goals were 1.4 compared to the Impact's 0.6. The lack of any result is a huge disappointment for the Union who are still searching for answers. 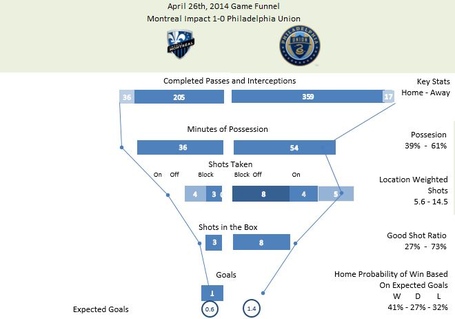 Stats of the Match -

The Impact intercepted 36 passes to the Union's 17. Even adjusting for opponent's minutes of possession the Impact's effort was top flight. To put that in perspective, the Impact intercepted 0.65 passes every minute the Union possessed the ball. The MLS average is 0.42 and the top team in MLS last year was Sporting Kansas City with 0.57. The Impact also had 26 tackles to the Union's 13.  Montreal averaged 0.48 tackles per Union minute of possession while the MLS average is also 0.42. The metrics define a Montreal team that dug in aggressively on defense and took it to the Union. The Impact were able to disrupt the Union attack time and again while the Union effort was not as inspired.

The Stat Zero of the Match is John Hackworth. Since this is a stat focused post I understand I need to come up with a stat to justify the choice. And here it is. The wingers at the top of the 4-3-3, Danny Cruz on the right and Fabinho on the left, had played exactly 33 minutes at those respective positions the entire season before the match. At Hackworth's weekly press conference he said "the tide will turn" indicating the Union offense would soon start to score goals. If he truly believed that why change ship completely? Neither Cruz nor Fabinho played badly (in fact Cruz's sharp cut and deft pass to Wenger who nearly scored was excellent) but the team is struggling to connect with the strikers. We know that Cruz and Fabinho are not creative enough on the wings to be the long term answer so why tinker and disrupt the growth of team during what should have been a winnable game? Hackworth needs to be held accountable for that decision, which in my opinion set up the team for failure not only in this game but delayed the cohesion the team desperately needs.

No Union player played well enough to earn a Hero award this week. But even if one player had played exceptionally well, the effort would not have been enough to top this week's hero, the late Eric Shertz. The Union team wore black arm bands in a classy tribute, and Comcast's pre-game memoriam was also excellent. I did not know Eric but the outpouring from the soccer community has been amazing to witness. The past week was a reminder of how important community is to the sport of soccer and how the greatness of the game does not transcend the people who build it up.

The Union have not scored a goal in the run of play in 305 minutes. They have set piece and PK goal in that time but have finished no shots in open play. And there have been three goals in four games since the trade of Jack McInerney.

The Union have taken 110 shots this year in total and scored nine goals. That is two goals less than an average MLS team should score with the same number of shots. Since the Union have never lost by more than one goal, each of those two "missing" goals would have been worth points (unless one came during the New England match). Whether the two missing goals would be worth two points or six they would have changed the complexion of the season. The bottom line is the finishing has to improve for the Union make any sort of run this season. Here's a look at the shot distribution and finishing rate this year compared with last year. In this chart, strikers are the combination of Jack McInerney, Andrew Wenger, Conor Casey and Antoine Hoppenot.

As you can see the Strikers are taking a much lower proportion of the shots this year. That's basically due to the tactical change and limit to one striker per match. 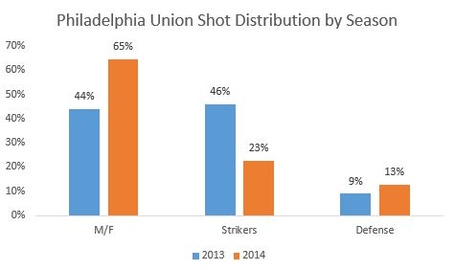 But the bigger drop-off is in the finishing rate of the strikers. They finished at a rate of 15% last year but this year have only an 8% rate. The midfielders/wingers are picking up the slack compared to last year but are only shooting at an average clip. In addition the defense should have scored a goal by now with one their fourteen shots. The Union's two missing goals are one each from the strikers and defenders collectively. 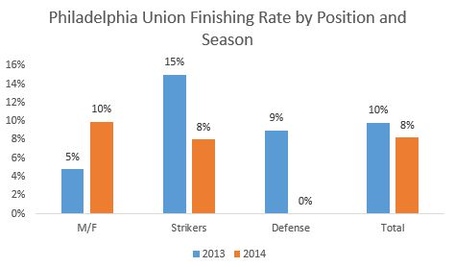 It's strange to think that two missing goals could cause so many problems, but this is the way soccer is. We're not even talking about exceptional play here, just average play. If the Union can just start working towards shooting at an average rate, the results will start to improve.

Do you agree with the Zero of the week? Or was a play(er) more deserving? Let us know in the comments below.