Welcome to a brand new installment from The Brotherly Game--Tailgate Crashers!

The tailgate has become a real tradition in American sports. The idea of standing around in a stadium parking lot for hours prior to a game may seem like a crazy idea to some, but to many of us, it is an integral part of the game day experience.

When arriving at PPL Park prior to game time, you will see a myriad of gatherings taking place. You will see games being played, food and beverages being consumed, and hear music being played via car stereo systems and other electronic devices. Being a fan of the Union makes you a part of an ever growing family. However, within that family, are definite sub-cultures. Each Union tailgate that you see in the hallowed concrete (or stone filled) jungle of PPL Park is its own unique experience with its own story. How did people get into soccer? The Union? How long have they been season ticket holders? How did the people they are tailgating with today come together? Any tailgate traditions? These are some of the questions that we want answered because it is the people that make the Union game day experience so special.

So what did we decide to do? Well, we decided to crash your tailgates! We'll provide a case of beer and you provide the food and stories. We'll write an article about the overall experience so that every Union fan can get to know your story. Hopefully through this process we can manage to bring even more fans together.

For our first installment we went to the amazing people who run DoopCast to find out what their pre-game tailgate traditions are.

Let me start by saying that I was not planning on dwelling on the food too much. With that said, their food was absolutely amazing. The master chef of the tailgate, Chris Miller, made an absolutely delicious Spanish pulled pork burrito with roasted poblano, serrano, Anaheim, and jalapeño/red peppers topped off with rice. There were other delicious ingredients in there, but you would seriously have to taste it to believe it. 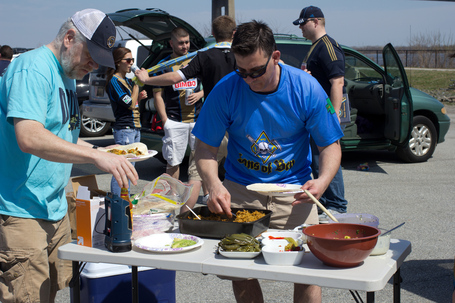 As if the food wasn't enough to keep us all there, the story of how all of them came to tailgate together is interesting. Believe it or not, it all started from a pick up soccer league back in 1996! This rag tag group of guys met through a Philadelphia soccer team called FC Stun. I am told that this was a United Nations team of sorts as there were many nations from around the world represented on the team. The fellas played on FC Stun from roughly 1996 until 2006. Of course it would only be natural that when Philadelphia got its own soccer team, that they would all come together again to share in the new professional team as season ticket holders. 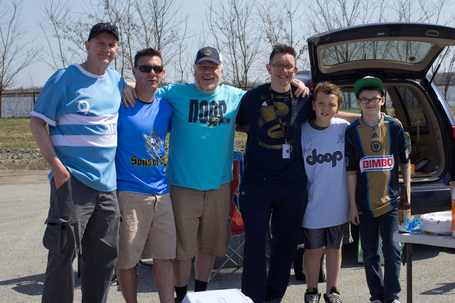 Finally, back to the second part of the title of this article--DoopCast. As I know many of you are aware already, three of the gentlemen (and I use that term loosely) every week run an amazing soccer podcast. Comprised of Richie the Limey, Dan Stormin' Gorman, and Pat the Professor, these three gentlemen have the fun task of dissecting the state of the Union after each game. If you are looking for a team of people that will bring you superb analysis as well as comedic relief to deal with the absurdities that come up during the season then DoopCast is your show.

I caught up with Richie recently and asked him how it was that DoopCast came about and this is what he had to say:

"When I came up with the idea of the DoopCast (before the start of the 2012 season) I immediately thought of asking Pat and Dan to do it with me. All three of us met when we started playing soccer back in 1996 and have been firm friends ever since. Pat and I always ended up talking about tactics when we watched a soccer game together, and I hadn't met anyone who know more about the subtle intricacies of a game so he was a natural to analyze that side of the Union's play. Add in the fact that he is a college professor who works with stats in his professional life and there you have it--the ultimate weapon.

As one of the original lunatics who thought that founding an organization like the Sons of Ben was a good idea, Dan could not be more perfect for the role of token Yank on the pod. Not only he is Philly born and bred but he had been following MLS since the very beginning and has a wealth of knowledge about the game in America. As a truly committed fan, Stormin' Gorman covers a lot of miles to follow the team and he brings and honest and vital perspective to the pod. Dan is also a great photographer. His photos on our Facebook page rival any professional products and his work truly represents the fan perspective." 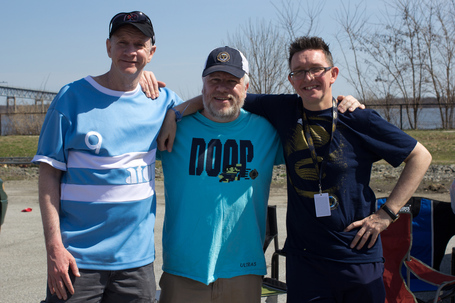 So there you have it. This tailgate is just one of many that go on during the course of pre-game festivities prior to a Union home game. Do you want your tailgate crashed and featured on an installment of Tailgate Crashers? Let us know and we'll make it happen!