Union 0-0 Dynamo: Statistical Analysis And Union Hero And Zero of The Match

The tale of two halves was the statistical oddity in this dull affair. We give out the hero and zero awards and look at another disturbing trend haunting the Union.

Share All sharing options for: Union 0-0 Dynamo: Statistical Analysis And Union Hero And Zero of The Match

Raise your hand if Charles Dickens crossed your mind while watching the Philadelphia Union take on the Houston Dynamo. It was hard not to think of the game as A Tale of Two Halves, the first four words of which we use when we see two things that are polar opposites (insert fifth word). Dickens coined that phrase in his famous novel A Tale of Two Cities. The opening line of that novel is famous as well. "It was the best of times. It was the worst of times." But this soccer match never reached either of those extremes. Instead the two teams combined to put a shot on target just two times in 90 minutes. A much less famous line from the same novel fits the game more readily, "we had everything before us, we had nothing before us." Opportunities presented themselves to the Union but in the end they could not put a shot on target.

The game funnel shows yet another game where the Union completed more passes and owned more possession but conceded more shots in the box. It's becoming a broken record, and I'll talk more about the trend in the big picture below. In the first half the Union had 48% of the possession but were outshot 12-1.

You will be hard pressed to find a match with a more extreme shooting differential between the two halves. 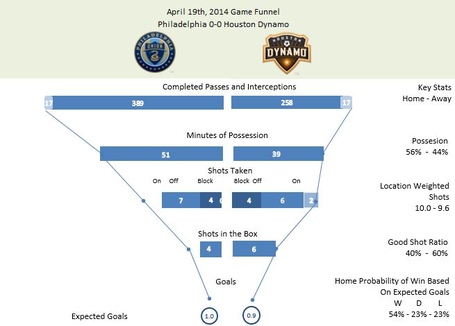 This may seem like a nitpick on Vincent Nogueira, but I assure you that's not the intention. I'm trying to isolate the missing link between the midfield and the forwards. There appears to be a lack of "magic" in the final third that is costing the Union better results. Here is Nogueira's pass chart. He touched the ball 65 times, made 54 passes and completed an astonishing 98% of them. 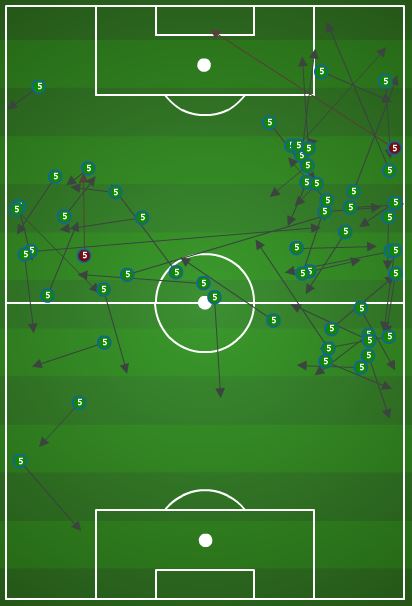 But the stat of the match is that I see only one completed pass by Nogueira into the 18 yard box. One was a long cross that didn't connect and one connects and another close one I'm judging to be outside the box. Maurice Edu had just one as well and Carroll had no passes completed inside the 18. But Nogueira is supposed to be the link to the three forwards up top. Look even further out. There is very little forward pushing activity even 30 yards out. There is an odd amount of space surrounding the box. Noguiera is a big reason the Union enjoy possession advantage now match after match, but the Union need him to push up even further to create chances for his struggling teammates.

Conor Casey flubbed what was the best chance the Union had all match. Andrew Wenger placed a great ball to Casey who looked to punch it into a half open net with his left foot. But the shot ricocheted off his right foot and into the face of a defender. It was a shot a striker has to finish. But Casey otherwise did not perform well. He had almost as many fouls (3) as completed passes (4). And there really isn't much more to tell about his 63 minutes. His whoscored rating was 5.9. Casey does not yet appear like he is the same player that finished second in the Comeback Player of the Year Award voting last year. The Union desperately need him to regain that form.

Anytime there is a clean sheet draw it's a strong bet the hero will be on the defensive side. Amobi Okugo earned his second hero award as the anchor of the clean sheet. He also took the shot that was the Union's closest to the frame, and that makes him the Union's most dangerous offensive player this game as well. Amobi had 13 clearances, a blocked shot, 2 interceptions and 3 tackles. He also completed 92% of his 52 passes, including a key pass. His whoscored rating was an otherworldly 8.26.

That's a really shocking number for a team that has enjoyed almost 54% of the possession over those same five games. Five games is too long for this issue to be chalked up to bad luck. The expected shot in the box differential given the minutes of possession favors the Union 32 to 28. So the Union have managed 7 less shots in the box than they should have while conceding 17 more.

Check out the poll below and see what the readers believe is cause for the Union's shot woes.