The Union have a problem giving up good shots and the numbers back it up. That problem was exposed by the Red Bulls on Wednesday night and this time there wasn't enough offense to save the day.

Share All sharing options for: Red Bulls 2-1 Union: Stat Zero of the Match

Perhaps one of these days it will be the Philadelphia Union that play like the desperate team. The New York Red Bulls, at home and desperate for their first win, found enough space inside their offensive 18 to net two goals and earn the win. The Union again showed effectiveness controlling the game from box to box, but continued to break down when the ball is close to the net - just where it counts the most.

The funnel shows the Union controlling the top in both passes and minutes of possession, which on the road is no small task. But things quickly fall apart as they only attempted 1 more shot than their opposition for all of that work. Even worse, the Red Bulls took 9 shots in the box compared to the Union 5. In the end the Union completed 65 more passes than the Red Bull but they were still expected to score 0.6 less goals based on the shots attempted. 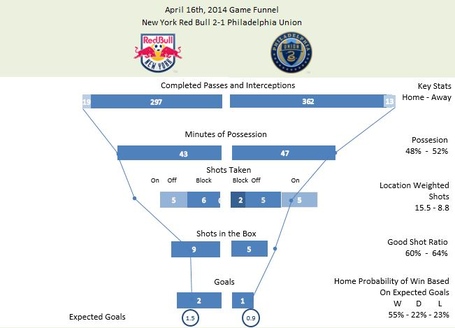 Stats of the Match -

The second stat of the match was that the Red Bulls attacked down Ray Gaddis' side of the field 51% of the time. Both goals came from attacks down the left side and both involved the maestro Thierry Henry. Take a look at the forwards' heat maps and how they worked the left side, especially Henry. Normally teams have been favoring the attack on Fabinho's side but perhaps this was more a concerted effort to get the ball to their playmaker Henry. Whatever the strategy, it worked. 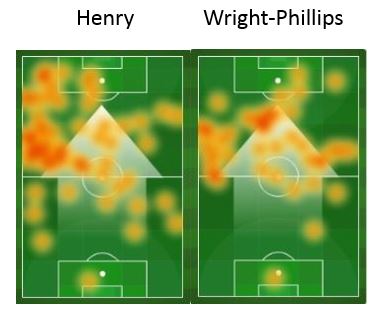 While Sebastien Le Toux was mostly non-existent again and lost his man leading to the first goal, his PK salvages his match. And also there was a midfielder who made less of an impact. Leo Fernandes had the least amount of touches with 29 and did not make enough of an impact on either end of the pitch. He was also trailing the 2 headed monster that headed in the second goal and sealed the match. Some of you stat hounds will no doubt start screaming that Leo completed 95% of his passes and two of them were key passes! All true, and those are numbers that usually put you in the running for Hero. But take a look at Leo's passing chart. Of the 17 passes in the attacking half, I count 4 that were forward (and just one toward the middle of the pitch). Leo's whoscored rating was a woeful 5.97. For a player the Union are expecting to be dangerous, that is not getting it done. 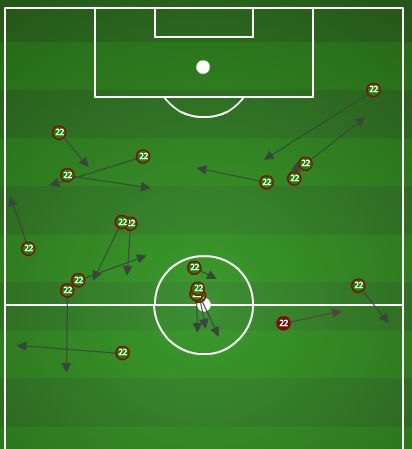 The award this week is more like who was the last player that was not very average. No single player stood out. Maurice Edu played a nice game, and if it weren't for the handball he would have scored the lone goal. But he also should have marked Henry once Le Toux caused the scramble on the first goal. So the hero award goes to Vincent Nogueira who unceremoniously passed 68 times and completed 96% of them. He also made the outstanding run that led to the Union goal. Here's a look at Nogeuira's pass chart just to make you feel better. 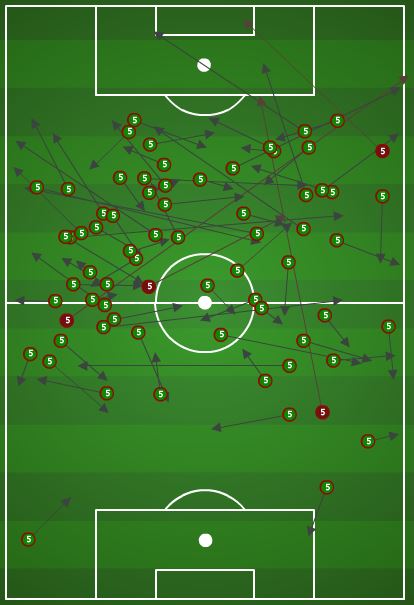 The quality of shots the Union are giving up on defense is becoming a big problem. Take a look at the table below.

In only one match this season have the Union allowed shots that were worse than the MLS average from a location perspective. In fact, the shots are in such close range that the Union have effectively given up 14.3 more shots than it appears. If you are curious, the Union's offense is slightly worse than average. They've taken 87 shots and their location weighted shots are 85.3. So while it appears the Union have taken 2 more shots than their opponent, when you adjust for the quality of shots, the Union has been outshot by 14. This adjusted TSR (total shots ratio) metric is actually a much more effective predictor of quality teams than the traditional TSR, which is not a good sign for the Union. You can read more about the adjusted TSR metric here.

What in your mind is the main cause of the Union's defensive breakdowns?