This week's stat zero and stat hero awards are tight and we went against the grain with the winners. We also examine the USMNT World Cup showdown between Kyle Beckerman and Maurice Edu.

Another day another draw. The good news is the Union have just one loss in 6 games. The bad news is the Union have just one win in 6 games. These types of results keep fans guessing just what kind of team the Union can be. But the latest draw with Real Salt Lake has to be viewed as a confidence builder for the young team. After taking bad penalty and spotting one of the best teams in MLS the lead, the Union battled, won possession and equalized when the game was on the line. Yes, there was another late game let down, but this time Maurice Edu took the team on his shoulders and headed home a goal that can only spur confidence going forward and build his equity as team leader.

The game funnel reveals a problem that has plagued the Union a few times this year. Despite a strong show of possession the Union conceded more shots per RSL minute of possession (0.32 shots per minutes versus a league road average of 0.24) and in the end, both teams took 13 shots. On top of that Real Salt Lake’s shots were over 10% closer than the Union’s, as RSL enjoyed 3 more shots inside the 18 yard box. That advantage meant that Real Salt Lake effectively took a shot and a half more than the Union. The bottom line is that RSL enjoyed a slight advantage in expected goals. The game ended probably as it should have. 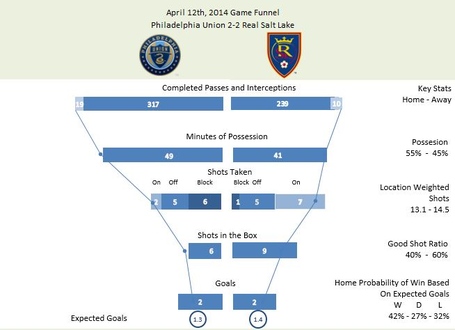 Stat of the Match –

What’s interesting is how the Union managed to win the possession battle. The midfields battled to a pretty tight draw, but the Union defensive back four were far more active than their counterparts. Take a look at the passing distribution of both sides. The Union defense actually completed 75 more passes than RSL’s defense. That was essentially the completed passes difference between the two teams and the reason the Union owned 55% of the possession. 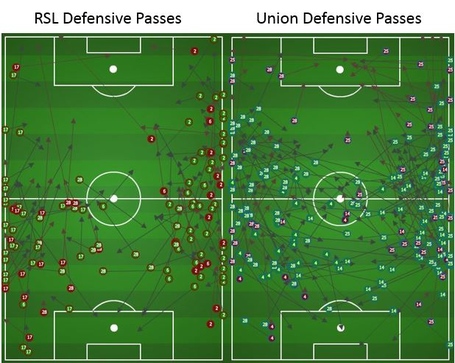 Had possession been even, RSL would have been on pace to take 1.3 more shots during the game. So kudos to the defense's ability to complete passes and possess the ball for contributing to their own defensive effort. Also, check out how much more of an offensive effort Gaddis put in than his left back counterpart Wingert.

Stat Zero of the Match –

This is the toughest stat zero award I can recall. It’d be easy to hand it over to Austin Berry for the terrible foul to start the game and the flubbed clearance that led to the second goal. But other than those two issues, Berry played a statistically solid match. He had a Union season high 14 clearances, led the team with 5 interceptions and had 2 tackles. He earned a very solid whoscored rating of 7.27. No, I’m going to look elsewhere for the zero this week even though that may be a tough argument. Just as in the Portland game, the Union did not get a strong effort from Sebastian Le Toux. He was credited with just 14 passes in the run of play. In addition he attempted 7 crosses (3 from corners) and connected on none of them. The only defensive statistic Le Toux registered was a single tackle. His whoscored rating was a starter low 6.31. The Union need more impact from the wings, whether he is on the right side or the left. Perhaps that was the reason for the moving Wenger over to the right and bringing in Casey for Le Toux in the 74th minute. It will be interesting to see if that formation is repeated as the season progresses.

Again, this appears to be an easy award to give but I’m going to buck the trend. For the second consecutive game, Zac MacMath made 5 saves including a penalty kick. It was a sensational effort and he could have easily earned his second consecutive hero of the match. But Maurice Edu’s equalizer and overall terrific performance earn him his first stat hero award of the season. Maurice added stats on both offense and defense. In addition to his clutch header, Edu had two key passes (passes that lead to a shot). He completed 80% of the his passes including 8 of 10 long ball passes (passes more than 25 yards). Defensively he had 5 tackles and 2 interceptions and his whoscored rating of 7.74 led the Union.

This match’s big picture is really about the heavyweight battle we witnessed between Kyle Beckerman and Maurice Edu. Of all the matches Jurgen Klinsmann was watching on Saturday I’m betting that the RSL-Union matchup was the one he watched most closely. Beckerman and Edu are battling for a spot on the USMNT World Cup roster. Beckerman has been a favorite son of Klinsmann’s during his tenure, but he must know in heart of hearts that Beckerman is not quick enough or strong enough to match up with Germany, Portugal or Ghana forwards. Edu brings that combination of size speed and experience that has to intrigue Klinsmann even though Edu had been off the USMNT map for a solid year. When Beckerman scored the go-ahead goal you had the feeling that might have been the nail in the coffin for Edu’s World Cup hopes. But his even more difficult equalizer brought him back to life. Let’s look at the tale of the tape from the last match.

The tale of the tape is too close to call. This game didn't make Jurgen's decision any easier.

What do you think? Were the awards appropriate this week or should we have gone with the popular opinion?