The MLS CBA: A Point of View on Player Salaries

Part II of the perspective on this year's MLS CBA negotiation. MLS Player salaries have a long way to go be competitive with all the world's biggest leagues. What does MLS need to do to catch up?

Share All sharing options for: The MLS CBA: A Point of View on Player Salaries

In part one of the series on the impending CBA negotiations, A Perspective on the League and Owners sets the stage by looking at MLS Owner's and some of the arguments they'll likely present.

On multiple occasions, Don Garber has put forth his vision of building MLS into one of the top leagues in the world by 2022. Although not often addressed, there's no question that achieving that vision will require increasing MLS player salaries to attract more top players. It's just a question of how fast, and the salaries may need to increase much sooner than 2022. MLS expansion will force MLS to pay market rate for the global talent they will need to fill out the new rosters. It's unreasonable to think that the new talent can all be drawn from the US pool and maintain even the quality MLS displays today. That's why the Collective Bargaining Agreement (CBA) negotiation that will mark 2014 is so critical. This CBA will likely get the league most of the way to 2022 - if not all the way there - and we'll know pretty quickly just how serious Don is about his vision. And we should be able to tell just how good the MLS will become over the next decade.

How do MLS player salaries compare to the top leagues in Europe? Take a look at player wages as a percent of league revenues. 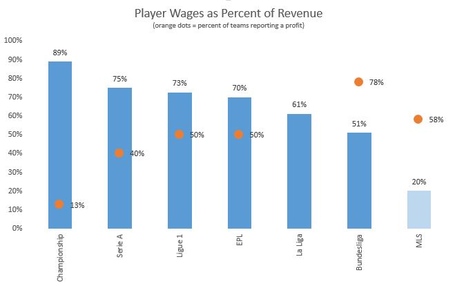 Note: This data does not include net transfer fees, it only speaks to the amount of salary paid to players. Also, all of the data in this post reflects data from the 2012 season (with the exception of the Serie A profit data which is 2011), which is the last season all data has been properly compiled by the various sources.

MLS players are significantly underpaid relative to the more established leagues. And despite that cost advantage only 58% of MLS teams made an operating profit in 2012 according to Forbes. That's only slightly better than the EPL and Ligue 1 that have 50% of the teams making a profit. The rationale for this discrepancy lies in the operating cost structure of MLS relative to the other leagues and that includes investment in infrastructure. The MLS is growing and has the lowest revenues of the above leagues so the impact of overhead costs and investment costs (like the cost for the Union's new practice facility, for example) are costs that MLS will have to overcome with revenue growth before they can pay the players more money.

Here's a look at MLS relative to other US sports leagues. 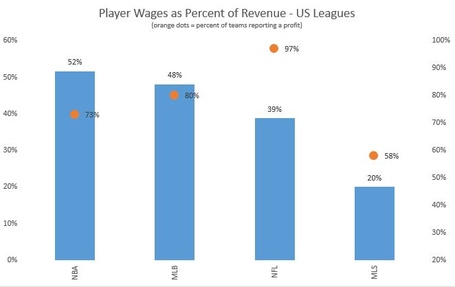 MLS is also well behind its American counterparts. This is also important as it could influence which sport young athletes choose to play. Also of note is that player salaries ratio across sports seem to correlate with the level of team profitability. The closest example is in the Bundesliga which pays their players similarly to NBA and MLB and also has roughly the same percentage of profitable teams. The rest of the European leagues pay significantly more for their players as a percent of revenues and enjoy lower levels of profitability league wide.

If we wanted to set a target model for Don Garber the best league might be the Bundesliga, not because it's a top league in the world but because their salary structure aligns with MLS objectives and is also similar to how the US leagues operate.

If you take the player wages and back out the operating profits from each league the result is the non-wage cost as a percent of revenue. 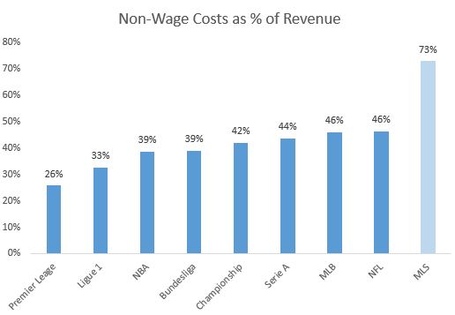 Note: these costs do not include interest, depreciation or amortization.

MLS is clearly choosing to invest in infrastructure and development instead of player salaries, like every other major league in the world. They also have likely not scaled their operating cost base. This is the reality facing a relatively immature league. But over time the money will need to shift to the players and it will have to do so at a rate faster than revenue growth in order to compete with the other sports leagues.

So What Players Should Get How Much?

It's frequently discussed that the minimum wage in MLS is embarrassing, and there is conjecture that this is where the players will hunker down during the CBA negotiations. Based on the data below I don't necessarily agree there needs to be a big adjustment with the minimums. MLS minimum wage does not pass the eye test for many Americans, mostly because any salary below the average household income doesn't look right for a professional athlete. But is it so far off of what MLS could reasonably afford? 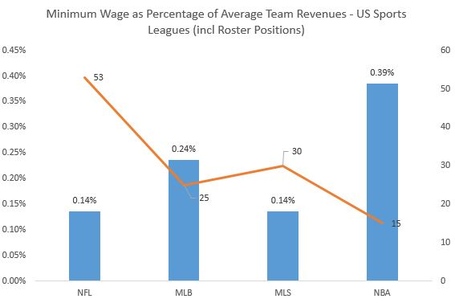 Off-budget players make $36,500 per year in MLS in 2014, 0.14% of an average team's revenue. While that number is in-line with the NFL rate, MLS has far fewer roster spots to fill. The ideal target is MLB which has a similar roster size. To roughly equate to MLB this chart would suggest that MLS should be at 0.21%. That would put the minimum salary around $55,000. Certainly a big pill to swallow for MLS owners but still a relatively low number from what fans are used to seeing in sports.

The MLB salary ratio not only compares well to the Bundesliga but it compares well from a roster size perspective. Continuing the use of MLB salary data, the below graph examines the breakdown of individual player salaries by decile. 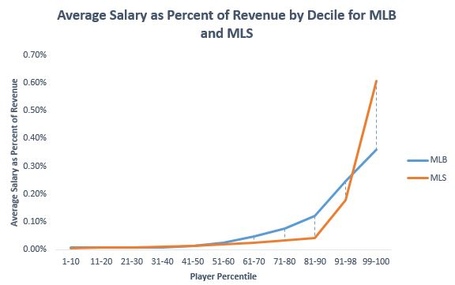 This chart breaks players into deciles from a salary perspective and then looks at the average of those salaries as a percent of league revenue. Notice the right tail of the chart. There, the final 2% of players for both leagues are compared. The final 2% in MLS are paid much more as a percent of revenues than in MLB. It's a clear strategy of MLS to paid the highest wages to players who can raise the profile of the league, and they are clearly willing to pay that premium.

The bottom 10% of MLS players are just a shade over 15% behind those same players in MLB. Through that lens, the minimum wage would need only crack $40,000 to be in line with MLB players.

The main difference between MLS and MLB is in the middle class. The gap becomes severe with players above the 60th percentile. That equates to the player making $140K per year in MLS. To match the MLB salary distribution those players would need to make $265K per year. That is not to say that the $140K player is underpaid, but the point is MLS could eventually replace a $140K player with a player that commands $265K.

This section of the player pool, between the 60th and 90th salary percentile is where MLS can gain the most in league quality. These are the players earning the most minutes, and if MLS can add depth right below the star level, it's going to most impact the quality of play. This is where a more traditional version of free agency would close the gap, however the risk the league and owners are mindful of is paying too much for existing talent. The reality is most players today won't be playing in 2022, so the key is to keep the current player pool salaries consistent while pulling in future talent at market rates.

The MLS Vision Becoming Reality - What Would It Take?

What could the future MLS look like? Or what would it need to look like for the Don Garber to see his vision meet reality? Let's build the reality. Let's assume by 2022 the MLS will pay their players 50% of total revenues, in line with the current Bundesliga level. MLS won't need to reach revenues of the Bundesliga to be considered a top league in the world, but they will need to be close to be paying quality players closer to market rate. Let's assume that MLS can achieve Don's dream by reaching Ligue 1 revenues but paying Bundesliga salaries. Finally, let's assume that Ligue 1 revenues grow at a modest 4% per year until 2022. Given those assumptions, the chart below shows what the annual growth rates of both revenues and salaries would need to be to reach that vision. 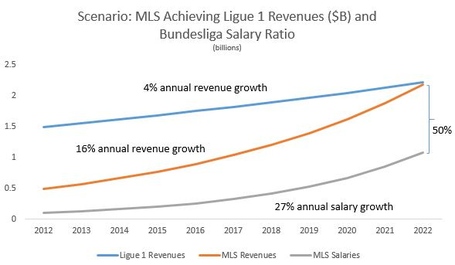 The target MLS revenue growth of 16% is very aggressive but Don Garber has a good amount of low hanging fruit to pick. The new rumored TV deal is for about $100M in 2015 and would increase the 2012 revenues (the basis for these numbers) by nearly 15%. The next TV deal might fetch the same 15% growth or more. MLS has also announced a 5 team expansion plan which will bring at least 26% growth as the teams come on. Without doing much, MLS can get almost a third of the way to the goal according to my calculations. The rest of the growth will need to come from game day revenues, sponsors and much improved local TV deals.

The more improbable number is growing player salaries at 27% per year to ultimately pay quality players at the global market rate. Given the last CBA increased the salary budget by 5% per year after the first year, it's hard to imagine the new CBA increasing that growth rate more than five fold.

Don Garber may not need MLS to look like Ligue 1 to claim victory for his vision. But this exercise shows the long road ahead to begin building out the quality and depth he seeks. MLS might point to the improving development of talent here in the US, but more than likely he will need to add quality players the old fashioned way - by buying their services on the free market. Garber is not in an envious position. He needs to fill new rosters with global talent and continue to pay below market levels for the majority of the rosters. He needs to invest in infrastructure to support the fan experience and talent development. And he needs to keep the current players happy.

In the next post we will put the pieces of the first two posts together (here is the first on the owners) and offer some ideas for how the owners and players should keep sailing the MLS ship. To help the conversation what do you think is the most important salary issue facing the players in the next CBA negotiation? Vote below.