The Brotherly Game staff have released their inner Nostradamus and predicted the Union's 2014 fate. To compliment the many perspectives, here is a purely mathematical projection. At the end we invite you to play with the model and make a nerdy projection yourself.

Share All sharing options for: Predicting the Philadelphia Union's Season

The incredibly knowledgeable staff at Brotherly Game has published their predictions for the upcoming season. Will the Union get to 50 points and make the playoffs? How realistic is a Supporter's Shield Run? Will it take too long for the new players to gel this season resulting in another November where the players watch from their couches?There are so many possible outcomes and plenty of anticipation to see those answers revealed. I thought I might add a slightly different perspective to the forecast mix by making a prediction purely using mathematics. You may have read my post where I looked at player performance metrics and their ability to predict points. Now I'm going to take the best performing player performance metric from WhoScored.com and use that data to predict the Union's points for the season. The model described 85% of the variance in last year's points table, which is pretty impressive.

But a model prediction is only as good as the data and assumptions you put into it. We need to explore 3 big questions before we develop the inputs and see what the model predicts.

There are just too many unknowns here so I am going to assume that the improvement of the young players exactly counteracts the influx of talent across the rest of MLS. Arguable, but easy to handle. The result of this assumption is that WhoScored ratings will remain the same for all players with one exception I will explore in question #3.

Question #2: Edu, Nogueira, and Maidana all just arrived from different leagues. How will their performance in those leagues translate to performance in MLS? This is a tough one but it's crucial.

Below is a look at 7 players who played in MLS last year and also previously played in one of the 5 big European leagues. On average these players improved their WhoScored rating by 9% when moving from Europe to MLS. Every single one of them improved their play, which is not a surprise. The biggest improvement was Tim Cahill who moved from a pedestrian 6.6 to a top flight score of 7.6. A 9% increase may not seem like much but within the range of normal WhoScored ratings it is pretty significant. A low end MLS starter will have a score of 6.3 and last year's best score was 8.1. That's a 28% lift from the low end of the spectrum. So these players were able to move nearly a third of the way up the scale after switching leagues, which is meaningful.

If we assume on average a 9% change in players coming from Europe to MLS then we can assume the following for Nogueira and Edu.

The main issue with the data is that WhoScored only has 5 games scored for Edu including his Champions League appearances with Rangers. We can feel a good deal better about Nogueira’s history. Nevertheless these projected MLS scores put Edu and Nogueira in the top 20% in the league. As for Maidana there is not enough data to make a projection. I am going to project him at 6.8 which is a score between Le Toux’s and Carroll’s.

Question #3: Who is the real Jack Mac? Many people consider the answer to this question the key to the Union’s fate. Below is the graph of Jack’s rating by game last year 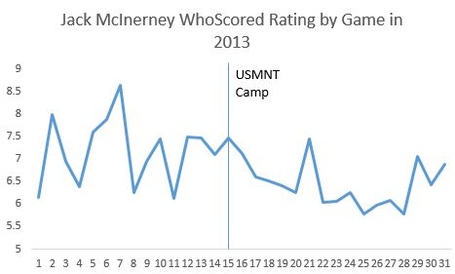 Before the USMNT camp, Jack was averaging an excellent 7.24 rating. After he returned from camp his score plummeted to an unsustainable 6.45. Overall he averaged a so-so 6.79, but will we see an "extreme Jack" this year? Will the midfield provide better service and lift his game or will he stay stuck in his 2nd half mire? I'm actually not going to pick either side but rather project him to be his 2013 average. At the end of the post I will run a scenario where Jack plays to his great first half level.

The other big inputs into the model are minutes played by each of the players. I've done my best based on last year's minutes, factoring in the investments made in the new players and the preseason trends. The full list of projections are below. The result of all these inputs projects 50.6 points for the Union in 2014. That's a 4.6 point improvement over last year and historically enough points to earn a playoff spot.

If Jack performs to last year's pre-camp level this projection jumps to 53.8 points. The average error of the model based on last year's data was 3 points in either direction.

If you'd like to alter these assumptions, I've put the model in a GoogleTM document and the link is below. Please feel free to play around with the minutes and scores and come up with your own projection. I've created a number of tabs for people to use (labeled Open1 to OpenX). Just pick one that hasn't been relabeled, relabel it (by right clicking on the tab) and then make the adjustments. Don't make adjustments to a tab that has already been relabeled. If all the tabs are labeled you can create a duplicate by right clicking on a tab. If you do play with the model, please post your result below. We'd love to see it.

The great part about this model is we can do variance analysis against the projections periodically throughout the season. We can redistribute the actual minutes and update the scores and see where the biggest changes to our expectations are occurring.