The fans and Union players got soaked and then walked away with heavy hearts, but the stats show an even result should have been expected. Here's the weekly look at the heroes and zeroes.

Share All sharing options for: Union 1-1 Impact: Stat Zero of the Week

The Philadelphia Union controlled most of the Montreal Impact team but could not control one player in his first appearance of the season. Marco Di Vaio left his mark on the match and claimed the draw the Impact deserved. The Union completed 50% more passes and controlled the ball for 37% more minutes than Montreal, but that wasn't enough to seal 3 points. And there was good reason for that. The home team may have possessed the ball even more except for the fact that the Impact intercepted 31 passes (MLS average is around 18) which turned into a myriad of counterattack opportunities. As a result Montreal had 60% of the shots taken inside the box and despite the disappointment the draw was more inevitable than it seemed.

The game funnel is a similar shape to last week's game against Columbus (lots of passes by the home team, more good shots for the visitor), expect that the Union were on the wrong end of the shots portion of the funnel. 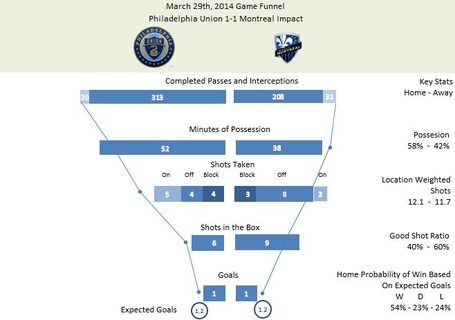 The Stat of the Week -

Marco Di Vaio took 9 shots in the game, and 8 of them were inside the box. No matter what excuses are made there was not enough attention paid to the game's most dangerous player. Looking at this statistic, one goal for Di Vaio seemed unavoidable. Take a look at his 8 shots inside the box and you might stop feeling the Union gave this one up. It's expected that one of MLS' best finishers will finish at least 12.5% of his shots from close range. 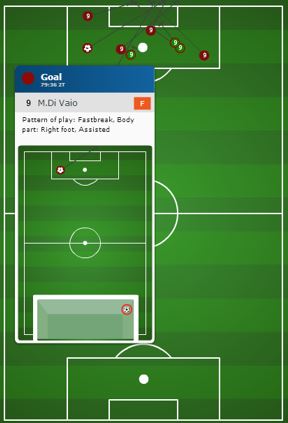 The Stat Zero of the Week -

No single player stood out as having a bad game statistically. But the stat zero of the week looks sternly at the number zero. There were zero shots taken by McInerney or Casey in the game. Zero. So Di Vaio out shot his striker counterparts 9-0. That turns the odds in Montreal's favor in a huge way. Last year the Union forwards took 46% of the shots and had a finishing rate of 15%. This year McInerney, Hoppenot and Casey have just 22% of the shots taken. And the rest of the team isn't exactly tearing it up with a 7.1% finishing rate. More on this issue below in the big picture.

The Stat Hero of the Week -

It's time to give Vincent Nogueira his due for hero of the week. After a few close calls, he gets the nod for his complete performance against Montreal. Again Nogueira was the central force driving the midfield control and this time he punched a key ball over the line. Vincent led the team in touches and completed 82% of his passes, one of them a key pass. He also had 4 tackles and an interception on defense. It should be noted that ex-Union player Justin Mapp also had a dominant performance. He also led his team in touches from the right side of the field and completed 88% of his passes. Mapp also had the highest Who Scored rating of the game with 8.26. Nogueira had a season best 8.05.

What's to be made of 4 goals scored and 4 goals allowed this early in the season? The expectation was that this team would need time to gel, and while the midfield has shown the ability to control tempo they haven't figured out how to link up with the forwards effectively. If this team begins to do that it could go on an impressive run. The Union have a Total Shots Ratio of 56.3% (meaning they have taken 56.3% of the shots in their games) which is good for the 6th best ratio in the league. The sample size is small but TSR is a good predictor of points at the end of a season. If the Union can keep up that rate the goals for and against should take care of themselves.

What do you think was the biggest contributor to Di Vaio getting 8 shots in the box? Vote below.