The weekly look at the big picture from a statistics perspective and the picks for hero and zero of the week.

Share All sharing options for: Crew 2-1 Union: Stat Zero of the Match

The Philadelphia Union looked to control possession in Columbus with mixed results and more questions were raised than answered. The result was a game more wide open than the Union would like, given two defensive starters were injured. In the end 19 shots were taken inside the box by both teams combined while the MLS average is 13. The Union's chances dwarfed their opposition's but they could not connect well enough, and Bernardo Anor did on his. Check out the serpentine game funnel this week that highlights some oddities of this match. 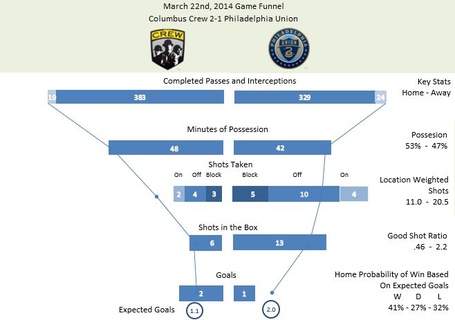 Columbus completed enough passes and disrupted the Union's efforts to control the ball for 53% of the match. But the Union outshot the Crew 19-9, including 13 shots to 6 inside the box. Check out the bulge in the middle on the Union's side of the funnel. But in the end the finishing wasn't there and it was for Anor and the Union left empty handed. The question raised is do the Union have the shooters to score enough goals? So far all three of their goals have come inside the 6 yard box on 5 attempts. They have 0 goals on 37 shots outside the 6 yard box. Last week I challenged whether or not the Union were producing enough shots but they answered that question affirmatively this week. Now I wonder if this group can actually finish from any sort of distance. The Union expected goals this year is at 4.4 and they have punched across just 3. All is not lost but it's another question to examine next week.

The Stat of the Week -

Two shots on goal for the Crew. Both taken by Bernardo Anor. Both goals. Another crazy aspect of the match. The Union can take away the positive that they have only allowed 4 shots on goal in the last 2 games, but they've allowed 2 goals as well.

The Stat Zero of the Week -

This week Cristian Maidana did not do enough to positively influence the match. Despite the fact that Columbus led 53% of their attacks down his side of the field, he was 2nd to last in touches on the team with 34. Even adjusting for minutes played he ranked 2nd to last in front of just Jack McInerney. Cristian also led the team with 6 turnovers and was dispossesed twice out of his 34 touches. One of these turnovers led directly to the 35 yard strike that sealed the game for the Crew. He also only registered 1 tackle and no other defensive statistics like clearances, interceptions or blocks. His heat map below brings to question the validity of the chart's name. So the question that arises now is who is the real Maidana? He looked sharp and dangerous against Portland but this last effort has left many wondering what exactly the Union have in the new midfielder. 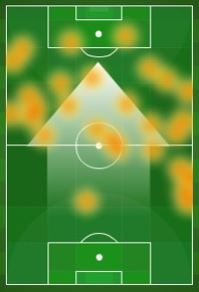 The Stat Hero of the Week -

Leo Fernandez recorded his first MLS goal. And what I liked most about it was he did not celebrate but instead rushed the ball back to the center line to keep the game moving. In a world of "look at me" goal scorers it was refreshing to see someone aware of the game situation and stay focused. But in his 35 minutes Leo also delivered 3 key passes (passes that lead to a shot) and put another shot on target (to equal the total shots on target by the Crew) and had a whoscored rating of 7.41. After two solid performances he has put his name in midfield mix and is a pleasant surprise in this young season.

Did I convince you of the Stat Zero of the Week or did you have a different one? Vote below.

The Whole Story: Matchday 3 The Union go to Columbus