Opposite View - Three Questions from Massive Report About the Columbus Crew

This week we've reached out to Pat Murphy of Massive Report, SBN's Columbus Crew blog, for a look at what to expect from the Crew.

Share All sharing options for: Opposite View - Three Questions from Massive Report About the Columbus Crew

tBG: Columbus had a bye week last week. Will that be a benefit or a hindrance to the Crew?

MR: Historically bye weeks have not been kind to the Crew, but in this case I think it will be. This team has gone through a major transformation in style of play under Gregg Berhalter and despite the good performance against D.C. United in week one, another week of acclimating to the new principles should pay off.Philadelphia presents a step up in competition over a United side that is trying to put all the pieces together. This means they need to have an even better understanding than the first game and the bye week should have helped them.

tBG: How are the Crew different under Gregg Berhalter as opposed to Robert Warzycha?

MR: Most of the ingredients are the same, but the way they played against D.C. was a whole new product. Warzycha favored a more reserve style and Berhalter wants to attack. The wing backs are much more involved in the play, getting forward early and often, and played a major part in the first goal of the season for Columbus. This style seems to have given new life to a team that ended last season with a bad taste in their mouths. The players are having fun playing the game and it is entertaining to watch (or at least it was last week).

Though it may appear the same as Warzycha's on paper, Berhalter's 4-4-1-1 formation has many more moving parts. Defensive midfielder Wil Trapp will often be seen dropping into a center back position as the outside backs get forward. Playmaker Federico Higuain has more space to operate and may be more of a focal point than he was previously. Berhalter wants to possess the ball in the attacking third, as opposed to Warzycha who was content keeping the ball in the middle until something materialized.

tBG: Michael Parkhurst was the big signing for Columbus this offseason, but the club also picked up a pair of players (Steve Clark and Giancarlo González) from Norway. What do those guys (and the other new additions) add to the Crew?

MR: Parkhurst adds leadership and experience. He stated that he believes the biggest difference from his first stint in MLS is that he's a better leader and Berhalter verified this by naming him the captain before the opener. In the first game he was able to contain Eddie Johnson, though it didn't seem United had quite figured out how to use him.

Gonzalez adds size to the defensive line that was lost when Chad Marshall was traded to Seattle. He is the stereotypical center back and adds international experience from his time with Costa Rica. Steve Clark may be the most vocal goalkeeper in Crew history (and that includes Jon Busch). He does a great job organizing the back line and distributes the ball effectively. Both players will be tested more this week than game one.

The other player to note is Hector Jimenez. His acquisition from the L.A. Galaxy was pretty quiet but he impressed in preseason and in the opener. Dominic Oduro was suspended against United, but Berhalter likes the way the team is playing with Jimenez wide right. He is similar to the now retired Eddied Gaven, who didn't always make a great play but made the right plays and was consistently in good positions. 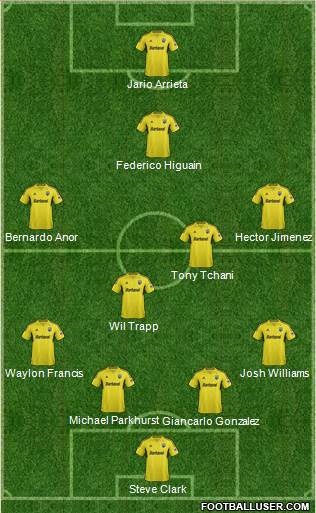 Berhalter has been noncommittal about Oduro or Jimenez. The Crew played two scrimmages last week and in the second, Oduro subbed in for Arrieta up top. I believe that is what he'll do for now, but it's possible Jimenez could sit or Anor could move to the bench and one of them could slide to the left.
Injuries: The Crew are fairly healthy. Midfielder Daniel Paladini had a knee scope last week and will miss 3-4 weeks and rookie defender Matt Wiet is still coming back from an offseason injury, but Berhalter said on Monday that everyone else was good. I will be at practice tomorrow and Thursday, so if anything comes of that I can let you know if you'd like.
Prediction: Crew 2 Union 1. The Crew are undefeated in home openers dating back to 2004 when they lost to the Red Bulls. This team is still learning itself so Philadelphia will have chances, but I think playing at home gives Columbus the edge.

To see the questions posed to us by Massive Report and our responses, click here.

The Whole Story: Matchday 3 The Union go to Columbus