Share All sharing options for: Union 1-0 Revolution: Stat Hero of the Match

New England was looking to protect their defense which was surprisingly without the MLS Defender of the Year, Jose Goncalves. The Revolution gave the Union plenty of space early and looked to play a counter attack strategy. But the Union snuffed that strategy out yielding only 5 shots while pounding 13 of their own. Almost everywhere you look in the game funnel the Union were in complete control. And while the New England defense was respectable, they acquiesced the one goal the Union would need. 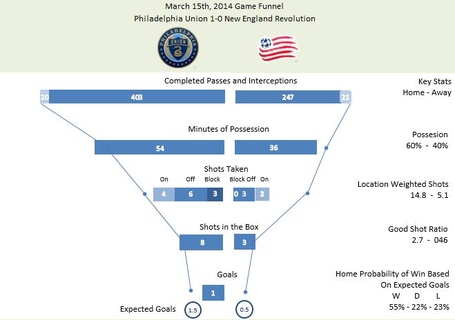 The Union held possession for a ridiculous 72% in the first half. The Union also snuffed out the counter attack strategy by limiting the Revolution to 5 shots when the average MLS team would have shot 10. Nogueira was the central figure as he led the team in touches with 91 and completed 87% of his passes, including 5 of 7 long balls. In the end, the Union possessed the ball 60% of the time. Hackworth said after the match that a stronger team would done better than 48% possession in the 2nd half, but that is now in the past and the Union got the job done.

The outstanding defensive effort that limited the Revolution to just 5 shots is somewhat dampened by the fact that a few of those chances were near goals. If not for a fantastic save by MacMath the crowd would have left PPL scratching their heads wondering how such a dominant performance could not have earned 3 points. So instead of the shots, the stat of the match is that the Union had 74.4% possession through the first 30 minutes. While the game was tied, the Union imposed their will in a complete way until they were able to find the space for the inevitable first goal.

All Union players acquitted themselves well on Saturday so the negative stat of the week looks at the team across the first two games. In both matches the Union took less shots than their possession should indicate. MLS teams take slightly more than 1 shot for every 4 minutes they possess the ball. The Union have taken 23 shots so far this year, but they should have taken 26.4. A 15% difference might not seem like much but if the trend continues they would score 3 to 4 less goals over the course of the season. It's far too early to know if this is really an issue but it's worth keeping an eye on.

Stat Hero of the Match -

I already sang the praises of Nogueira's everywhere and everything match and the stats back up his terrific performance. But one other player stood out more in my opinion. Ray Gaddis. Ray was 2nd on the team in touches with 78 and completed 80% of his passes, many in the attacking third. He notched one key pass (a pass that leads to a shot). Defensively he was also a key part of the clean sheet. He had 5 tackles and led the team with 4 interceptions. His whoscored rating was an excellent 7.54. Not bad for someone who is not supposed to be starting. Check out his heat map compared to his counterpart Fabinho. Fabinho had a nice game as well but you can see how much more active Gaddis was on the right side. 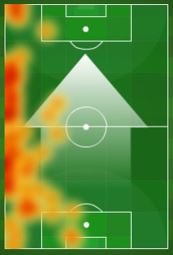 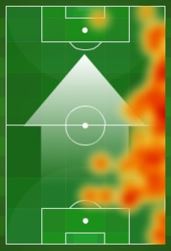 Update: per the request below here is the Nogueira heat map. It's hard to just look at a heat map in isolation so I picked Nogueira's positional counterpart on the Revolution, Caldwell. Nogueira was far more active in the attacking half but that may have been tactical. Overall Nogueira's heat map is pretty intense to be honest. You don't see many that colorful and consistent across the field. 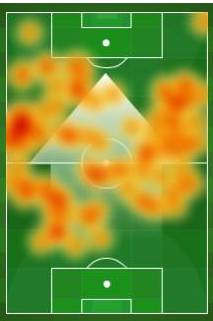 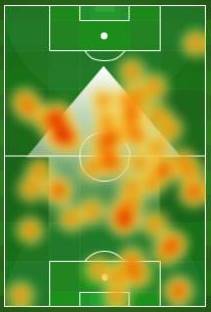